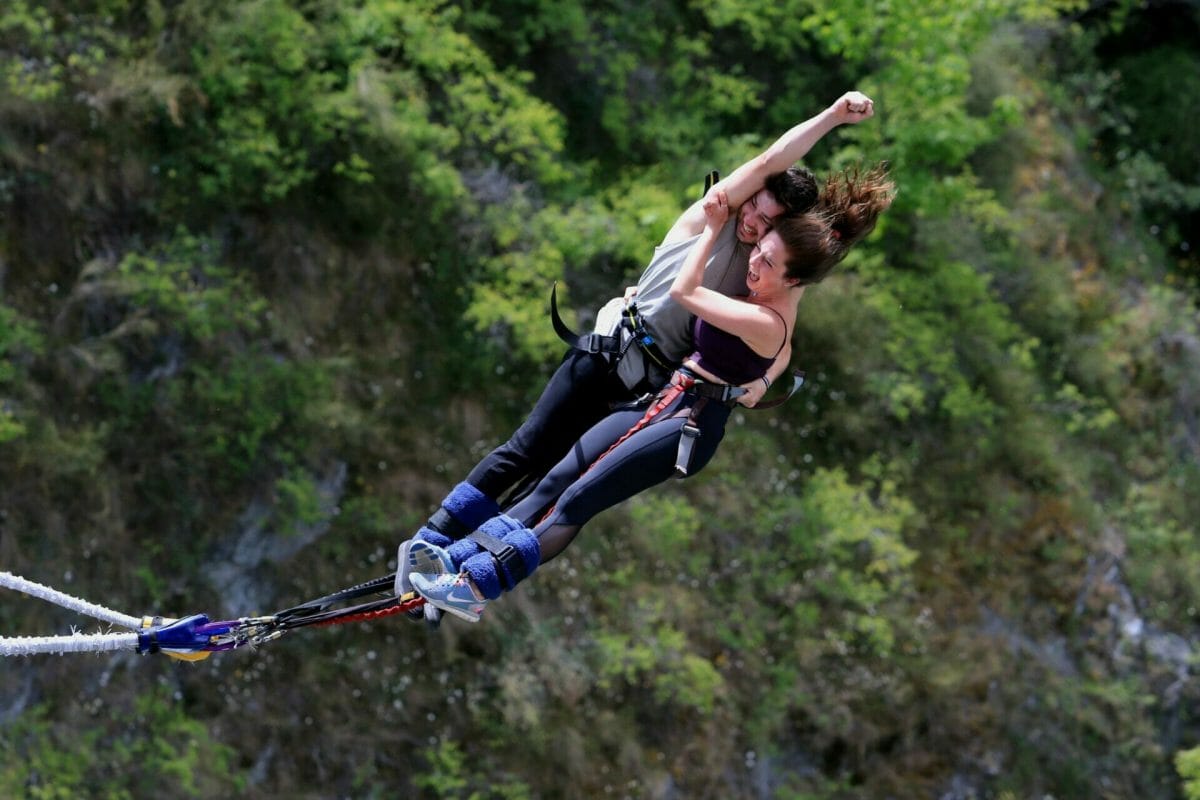 Bungy jumping off the world’s first bungy site in Queenstown

The hands-down most terrifying moment of my young life was standing on the edge of a small platform nearly 50m above a Gatorade-blue river in New Zealand and, despite every cell in my entire body screaming WHAT ARE YOU DOING, taking a flying leap off.

Well, that’s a bit of a dramatisation of the actual dismount. I sort of just leaned forward and fell off the ledge, because by that time my legs weren’t really working properly and I also felt like I was going to have a heart-attack. Honestly, I still can’t even believe I did it, because I have a (very natural and totally justified) fear of falling. I get this horrendous nerve pain in my toes when I even think about jumping off something, so this was quite an accomplishment for me. What’s more surprising, I LOVED it!

Cost: Plunge 47m and dunk into Gatorade-blue water for just $205 on the Kawarau Bridge bungy. Book online in advance or in person the morning of your jump at AJ Hackett’s Queenstown Bungy Centre.

Getting there: Catch a free bus from AJ Hackett Bungy in downtown Queenstown (Corner of Shotover & Camp Streets) which will take you straight to the swing site and return you after, or drive your own car to the Kawarau Bungy Centre (State Highway 6, Gibbston Valley).

Top tips: Book the World’s Biggest Swing along with the Kawarau Bridge bungy jump (or a jump at any of AJ Hackett’s other sites) and receive an $85 discount!

Cal and I actually had no plans to go bungy jumping in New Zealand. I justified it to myself by saying that it would probably rip my spine in two or dislocate a retina or something, but in reality, I was just haunted by the toe pain every time I so much as thought about bungy jumping and was way too terrified to consider it seriously.

We soothed our egos by aggressively promising each other that we would do the Canyon Swing, which would be together and perhaps slightly less terrifying. (After doing it, I’m not really sure that it was any less terrifying.)

This morning, the family and I went down to the AJ Hackett storefront to book in our Canyon Swing― and we even managed to convince my dad and stepmum, Eileen, to do it (by which I mean we convinced dad to do it, because Eileen was already sold). And then Cal and I saw a video of a tandem bungy jump and looked at each other in what felt like slow motion. We’ve come all this way to New Zealand, how could we not do the jump, especially if we could go together?!

Fast forward to the Kawarau Bridge, home of the world’s first commercial bungy site, where we are both sweating out of every pore in our bodies and trying not to hyperventilate. We did the Canyon Swing only an hour or so ago, so the adrenaline is still pumping hard through our veins and making me feel like I might actually rupture a whole series of blood vessels if I make any sudden movements.

I was far more scared than Cal during the Canyon Swing, so maybe I’ve worn myself out a bit or maybe I’m just becoming incredibly brave (unlikely)… whatever the reason, I’ve managed to stay a lot more calm as we wait in a short queue on the bridge for the staff to start roping us up. Meanwhile, Cal is looking ill.

When we finally get to the front, which is under the framework of the bridge, one of the staff wraps my ankles with a towel and then starts snuggly winding a rope in a figure-8 pattern. The guy is only young himself and keeps taking the rope off to restart the process, which is making us both a bit nervous. When he’s done with the rope, it only gets tucked into the towel, not tied to anything, so it’s relying entirely on the tension from the multiple wraps to keep ahold of us. I have a flash of fear that my shoe will fall off and my foot will slip straight out of the rope, so I re-knot my shoes to painful tightness before the bungy rope is clipped to our foot rope.

We hobble forward, unable to move our feet apart at all, and slowly creep towards the platform for the jump. The next bit happens incredibly quickly, which is good, because I do not need any extra seconds to start panicking. They tell us to look up and over for a photo and then they count us down from 3 at lightning speed. We fall together.

The feeling afterwards is unbelievable. I feel like I’ve survived near-certain death and now we are even more high on life than we were after the Canyon Swing. We are running around and laughing and we even buy the professional photos, which I never do, but they are too good to pass up (particularly the photo below where I’m aggressively gripping Callum’s armpit hair).

When we get back to Queenstown, we relive the whole experience through the photos and give dad and Eileen an amazingly detailed play-by-play of our harrowing survival on the bungy. Nothing can beat the sense of pride we feel in ourselves, though, and we smugly fall asleep feeling like we really accomplished something today.

Pulling safely into a raft after the bungy

15 AWESOME THINGS TO DO IN QUEENSTOWN, NEW ZEALAND (UPDATED 2020)