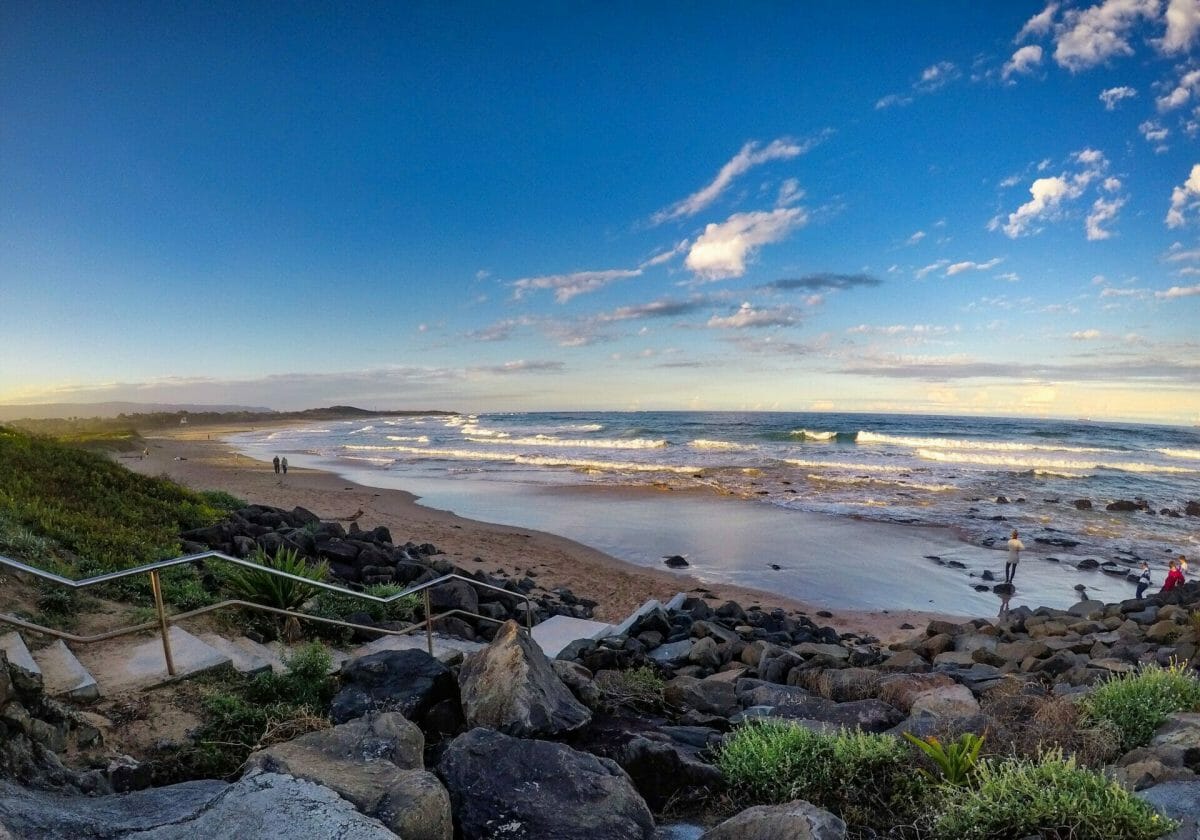 The Illawarra is so underrated. Everyone knows about Sydney, but what about the gorgeous south coast? In close proximity to the phenomenal Royal National Park, overflowing with white sand beaches and clear blue water, gateway to some truly incredible coastal sights, it’s a wonder people aren’t flocking here by the thousands.

I lived here for 3 years (the whole time I was doing my undergrad) but then moved to Melbourne and got to play city gal for a year, so moving back to the Gong this weekend, which is a small beach town in NSW, feels like a big change. (Despite being small, it’s still the 8th largest city in Australia..)

But the beach. I can’t even express how much I missed it. Swimming in the ocean before uni, going to the supermarket barefoot, spending whole weekends just laying around in the sand, there’s nothing like living on the coast. It’s home.

And the sun! Melbourne is a lot greyer and chillier in the winter than the Sydney area, so we moved up this weekend to 20C and blue skies, even though it’s the dead of winter. Obviously I leapt at the opportunity to take Callum (a born and bred Melbournian) around some of the best sites in the Illawarra to really sell him on Wollongong. I mean, he already moved here, so it’s not really “selling”, more convincing him that it was a good idea to follow me up here…

Maybe some of these photos will encourage more people to explore beyond Sydney and see the beautiful Illawarra. Here is the best of Wollongong & surrounds, stay tuned for more posts on the best of the Illawarra!

It’s not the best beach in the world (not even really the best beach in the area), but it has really beautiful pools and it’s on the prettier side of Wollongong (ie. can’t see the steelworks). In a previous apartment, I lived right on the beach on the far side of South Beach, which was called “shitties”, so you can imagine my delight at no longer having to tell people “I live near Shitties” when describing my home. I really feel like I’ve moved up in the world.

Anyway, there is awesome food at North Beach. La Vendi has incredible fish’n’chips and calamari rings, Diggies has fabulous brunch, and there is plenty of ice-cream to be had. Pretty much every weekend in summer has music playing and some sort of SLSC activity on, as well, so never a dull moment.

There are also great rock pools in Towradgi, and the best way to get there is to take a bike ride along the boardwalk at North Beach, continue on to Fairy Meadow, and then get on the bike path to Towradgi there. It is only a short ride, but beautiful!

While I was living in Fairy Meadow right across the road from Puckey’s, I never set foot in this annexation of the Wollongong Botanic Gardens because it had a bit of a sketchy reputation at night. Recently, however, I walked from North Beach to Towradgi via the nice walking path through Puckey’s and was blown away to discover that it’s actually a beautiful area perfect for afternoon strolls and midday bike rides!

When my lovely Spanish friends and I went on a delightful adventure to Minnamurra Rainforest, just a short 30 minute drive from Wollongong and a 2.5km walk out to Minnamurra Falls, the viewpoint for the falls was (sadly) entirely cordoned off, so we hardly got the dramatic finish we were hoping for, but the beautiful rainforest flora proved an ample consolation.

Mt. Keira is always a popular hike and viewpoint, but the neighbouring Mt Kembla also offers equally spectacular views over Wollongong and the Illawarra, plus onto Mt. Keira.

One of my favourite places to take out-of-towners, Seacliff Bridge is in Clifton, about a half hour north of Wollongong. Definite WOW factor, and on a perfect weekend like this, it’s one of the nicest views in the region. You can walk along the road on the footpath, but for even better views, park your car and cross the road near the start of the bridge. There’s something that looks somewhat trail-like heading into the bushes– it is in fact a trail– follow it for about 5 minutes upward and you too can appreciate marvellous views. The road itself is also quite fun, just because of the sharp curves and plunging cliffs, so obviously we waste no opportunity to put our top-of-the-line, high performance vehicle to the test (1994 Nissan Patrol, 0 to 100 in three-quarters of an hour).

Only another 5 minutes north from Clifton, Bald Hill is a fantastic lookout in Stanwell Tops. It’s also a very popular hang-gliding take off spot (super expensive), but watching the gliders is also pretty good entertainment, though admittedly not as thrilling as actually gliding, I’m sure. I’d love to come back here someday and actually partake, but I don’t think it will be this year. Maybe next year I’ll win the lottery.

9 amazing things to do in Perth, Western Australia