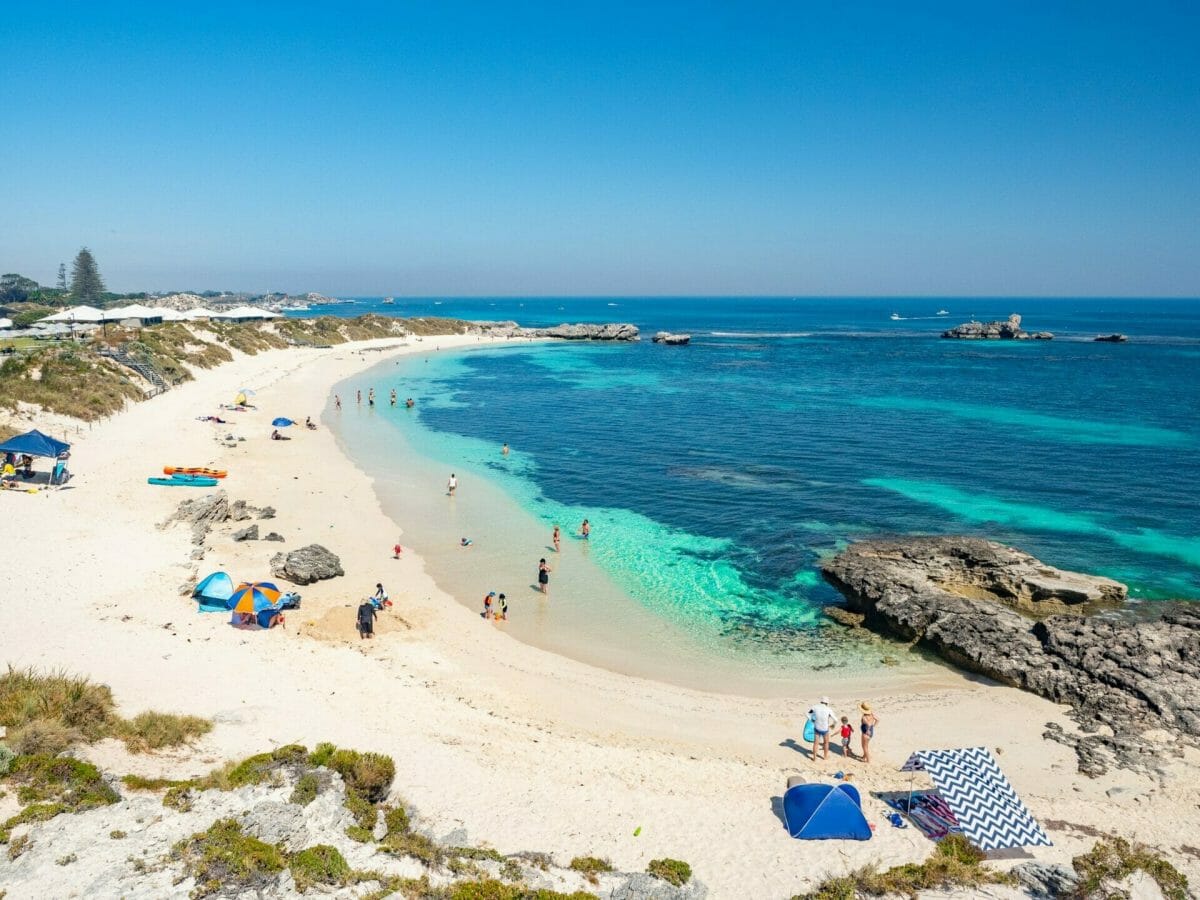 Every year, millions and millions of travellers are drawn across the world to Australia, exploring immensely popular sites from the Great Barrier Reef and Gold Coast to bustling Sydney and Melbourne— but a small fraction of these visitors ever make it over to Western Australia and its capital Perth, a 41-hour drive from Sydney and a 4-6hr flight from most East Coast cities. Speak to anyone who’s visited WA, though, and they’ll practically shout it at you: this is the most spectacular part of Australia.

White sand beaches with impossibly clear water, charming convict-era towns and tree-lined cities, dramatic cliffs and canyons, abundant marine life from stingrays to whale sharks, one of the country’s top yielding wine regions, and a whole lot of jaw-dropping scenery awaits in WA, and best of all there are hardly any tourists to share it with.

Western Australia occupies more than one-third of the country’s total land mass, so suffice to say you’d need years to properly explore every inch of the place, but with just 1 week up your sleeve, you can still do justice to Perth and the South West. Use this itinerary to plan the ultimate visit to WA, taking in sights from Perth and Rottnest Island to Yallingup and Margaret River. Prepare to be amazed.

When to visit South Western Australia

Given their southerly position in WA, Perth, Yallingup, and Margaret River’s beaches are all best enjoyed in summer, early autumn, or late spring (around October-March), when the weather and water will be warmer.

If you’re not fussed about getting in the ocean (although you really should!), shoulder season can often be a good option, with months outside of December, January, and February offering cheaper prices and fewer visitors.

Most all visitors to Perth will arrive via plane into Perth Airport, which has regular flights from all major Australian cities, as well as direct flights from London, South Africa, the Middle East, and heaps of cities in Asia.

Due to open in 2020, the new Forrestfield-Airport Link train line will make it super easy to get between the city and Perth Airport (stay up to date on the progress here), but I’d definitely suggest hiring a car instead.

Getting around Western Australia

To get the most out of a trip to South West Australia, I’d strongly recommend hiring a car and following this road trip itinerary. As long as you’re over 25, car hire is surprisingly cheap in Australia!

There are 8 hire car companies at Perth Airport, including Hertz, Avis, and Enterprise, but there are also cheaper companies located just off site. Ace Rental Cars has a fleet of slightly older cars (around 5-10 years old, but still perfectly safe) and has far better prices as a result.

Perth may be the world’s most isolated city, but it’s still an awesome place to spend a few days, its abundant greenspaces and relaxed WA vibes making it feel more like a large town than a state capital with 1.9 million people. Sparkling Elizabeth Quay, a relatively new development on the foreshore between Perth CBD and the Swan River, is one of the best places to explore, as is enormous King’s Park, one of the world’s largest inner city parks, which overlooks the whole city. Read more about what to do in Perth in this post.

Just 25min southwest of Perth CBD (and still considered to be part of the Perth metro area), Fremantle is another incredible destination, this enchanting 19th century port town on the Indian Ocean a favourite among visitors. In addition to its old-world charm, Freo (as it’s affectionately referred to by the locals) is an epicentre for arts and culture in Western Australia, attracting a variety of musical and visual talents to the popular Fremantle Markets, as well as hip local boutiques, trendy cafes, and craft breweries. Take a few days to get to know Perth and Fremantle before hopping in the car and continuing the adventure down the coast.

Highlights: Check out the view from King’s Park and explore the Botanic Gardens; go wine tasting in the Swan Valley; go for lunch at Island Brew House in Elizabeth Quay or enjoy cocktails from The Reveley’s rooftop bar; sail a catamaran on the Swan River; go for a dip at Cottesloe Beach; explore the artsy Fremantle Markets

Getting there: Drive 20min from Perth Airport to the CBD or 35min to Fremantle

Where to stay: There are heaps of options for accomodation in Perth, ranging from budget hostels like Spinner’s Backpackers to upscale hotels like Quay Perth, but my personal recommendation is to stay in Fremantle, about 25min SW of Perth CBD. Federal Hotel is set right in the middle of town in a large colonial building with a bustling on-site bar and restaurant, offering spacious, air-conditioned rooms for about $70/night.

Read more: 9 AMAZING THINGS TO DO IN PERTH, WESTERN AUSTRALIA

Easily accessible via a quick, inexpensive ferry from either Perth or Fremantle, the next stop on your itinerary is Rottnest Island, or “Rotto” as the locals say. This little island off the coast perfectly showcases the rugged, untouched beauty of Australia’s South West, and is one of only a few places in the world where you can see quokkas, the adorable little marsupials that have gained internet fame for smiling in selfies alongside giddy tourists.

Rottnest Island is simply spectacular, so if time allows, stay overnight to discover every corner of this 11km island. Even as a day trip, though, Rotto will not disappoint, and is best explored on 2 wheels (there are no private vehicles on the island). Bike hire is just $30 for the entire day, allowing you to zip around to all the best swimming beaches, fantastic snorkelling bays, adorable quokkas, and vibrant pink lakes in your own time. For more ideas of exactly what to see and do on Rotto, check out this post.

Highlights: Spot adorable, smiley quokkas around the island and pose for a selfie; go for a swim in perfectly clear water at Pinky Beach, the Basin, or Parker Point; snorkel with colourful marine life at Little Salmon Bay or Parker Point; cycle past vibrant Pink Lake

Getting there: From Perth or Fremantle, 3 different ferry companies sail over to Rotto— I’d recommend travelling mid-week with either SeaLink Rottnest or Rottnest Express from B Shed in Fremantle, as these tickets are the cheapest ($30 return + $19 Government Admission Fee) and this trip is also the quickest (25min).

Where to stay: There are a variety of places to stay on Rotto, from budget camping to upscale hotels (and you can read all about the different areas to stay and accomodation options in this post). I’d recommend staying at Discovery Holiday Park for $274-489/night or the Premium Units at Geordie Bay/Thomson Bay for $143-330/night.

After spending a few days exploring Perth, Fremantle, and incredible Rottnest Island, head several hours down the coast to the Yallingup & Busselton region, home to some of South West Australia’s most jaw-dropping white sand beaches. There are heaps of beautiful spots to enjoy here, including a frothing swimming hole at Injidup Natural Spa, the 1.8km Busselton Jetty and its vibrant underwater reef, and impossibly picturesque Meelup Beach.

In addition to a stunning coastline, Busselton and surrounds are also home to a number of wineries and world-class restaurants well worth a visit— although named after Margaret River in the south, this wine region actually extends well up into Busselton and there are dozens of cellar doors to enjoy before heading down to Margs (or even along the drive).

Getting there: Drive 3hrs from Perth to Busselton

Where to stay: The basic but clean and comfortable Busselton Motel offers free on-site parking and is centrally located in Busselton, about $120/night for a double room.

Finally, make the short drive from Yallingup down to Margaret River, where more than 200 vineyards, hundreds of award-winning wines, and countless cellar doors have made this otherwise tiny town one of the main destinations in WA.

But Margaret River isn’t just for wine lovers— among several hundred award-winning wine estates, Margaret River is also home to some of Australia’s most spectacular white sand beaches and best surf breaks, infinite secluded swimming holes, a thriving food and art scene, and a real abundance of stingrays, kangaroos, and even migrating humpback whales. Check out all the best things to do in Margaret River in this post.

I’d recommend doing a wine tasting tour on your first day in town and then spending the following days visiting a few cellar doors in the morning, indulging in a fabulous lunch, and then hitting the beach in the afternoon. It’ll feel all too soon when you do leave Margaret River, but the 3hr drive up to Perth Airport is easy and stops along the way at Bunbury Markets or Black Diamond Lake offer the perfect finale to an amazing week in Western Australia.

Highlights: Go wine tasting at award-winning estates like Leeuwin, McHenry Hohnen, and Vasse Felix; sample some of the region’s best food at Will’s Domain or Xanadu; snorkel with stingrays and eagle rays at Hamelin Bay Beach

Getting there: Drive 40min from Yallingup to Margaret River

Where to stay: Grab an Airbnb in central Margaret River for an inexpensive, homey experience.

Read more: WHAT TO DO IN MARGARET RIVER: A GUIDE TO ALL THE BEST WINERIES, BEACHES & VIEWS

WHAT TO DO IN MARGARET RIVER: A GUIDE TO ALL THE BEST WINERIES, BEACHES & VIEWS

A FANTASTIC DAY OF WINE TASTING WITH MARGARET RIVER TOURS

9 AMAZING THINGS TO DO IN PERTH, WESTERN AUSTRALIA