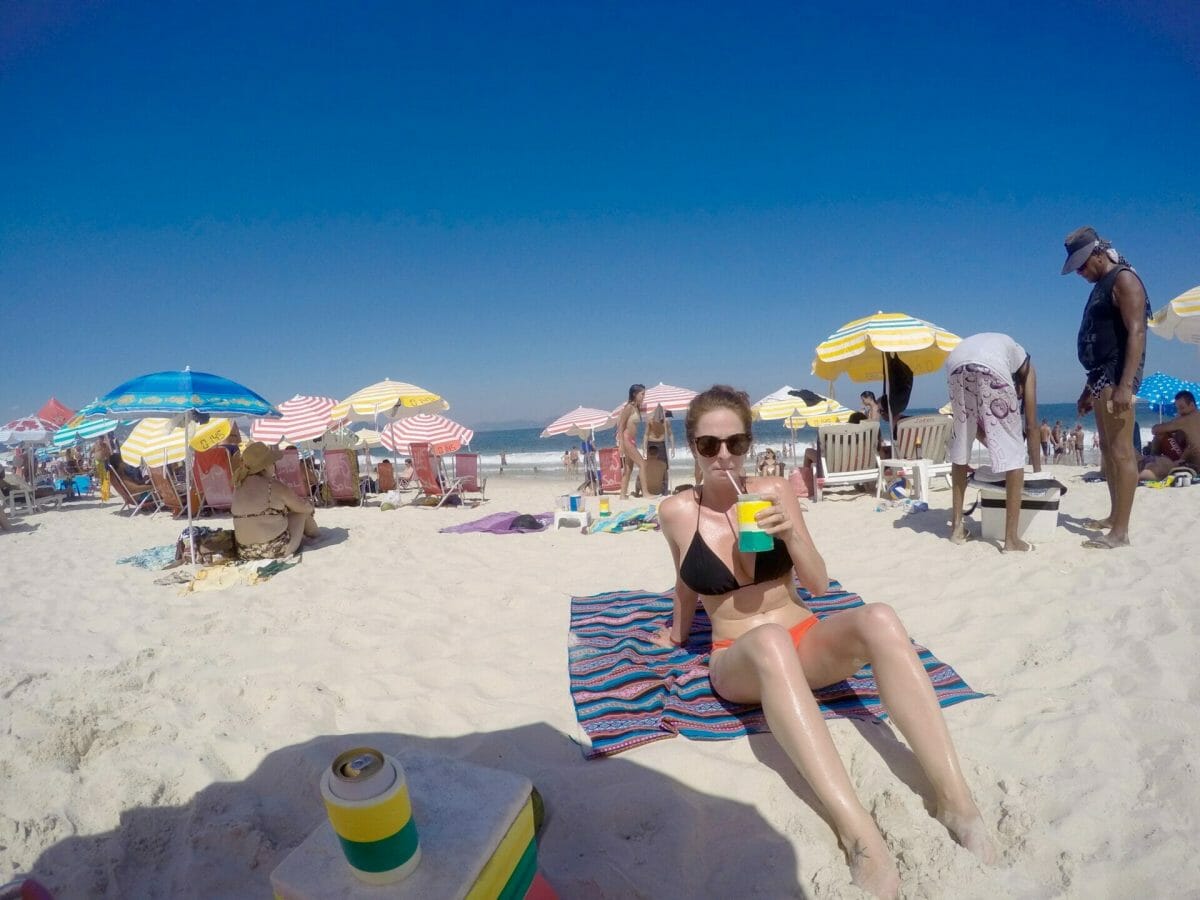 It’s hard to believe that we’ve been in South America for almost 3 months now (!!), but the best may be yet to come. We have just arrived in Rio de Janeiro for a week of Carnaval and already we are bubbling over with excitement. We have booked a room through AirBnB, and the flat is a stone’s throw from all the action on Copacabana Beach. Quarters are cramped with a family living in the flat, both of us staying, and another middle-aged American man renting a room through AirBnB as well, but we don’t even care, because there is no way we could have found a better location unless we slept directly on the beach.

We settle into our room and quickly establish a routine that we hardly break the whole 8 days we are there. We wake up in the morning, toss on swimmers, and trudge downstairs to a cafe directly below the building that sells the most unbelievable açaí shakes with banana, guarana, and blueberry. They are gigantic, and it’s absolutely impossible to finish before it melts since it’s also roasting hot outside in the sun. After our breakfast (often the only meal of the day), we walk the few metres to Copacabana Beach and find our umbrella guy. For about $20, we rent a huge beach umbrella and 2 beach chairs, stake out the best spot, and then a rotating cast of Brazilian men deliver us freezing caipirinhas nearly faster than we can finish them. We do a lot of reading during our beach time, but, invariably, we end up a bit drunk and make a break for the ocean.

By the afternoon, we abandon our beach chairs and swing by the shops to pick up a bottle of cachaça and a bag of limes to mix our own caipirinhas, and then make plans to meet up with the Brazilian friends we made on our first day.

(While sitting on the beach near a riotous bloco, Jo interrupts me and Aristo mid-healthcare debate to ask why we are fighting during the best celebration in Brazil. We make fast friends with Jo, who speaks limited English, and her partner Paolo, who speaks absolutely none and only a tiny bit of Spanish, but smiles a lot, and spend much of the next week enjoying Carnaval with the natives from one of RDJ’s favelas.)

We might head to Ipanema Beach for drinks or walk a few blocks to a bloco (one of the famous street party/parades that Carnaval is famous for). Depending on the bloco, we might slowly parade our way down the street while loudly (and probably very incorrectly) singing whatever Portuguese song that particular bloco has chosen, or we might dance in a moshpit of sweaty Brazilians under a pumping sound system. Either way, fun ensues and frango abounds.

Before we know it, it’s dark and we move the party to another beach or follow noise to a new bloco. Maybe once or twice during the whole week, we eat dinner around this time, but more often, I’d just opt for an açaí shake from the cafe near our flat.

I can’t even begin to put this week into words. That may be due in part to the fact that I was pretty out of it all week, but also just because we had the most incredible time. Our Brazilian friends really made this experience for us, as well. Not only did they show us the coolest blocos and take us all over Rio, they even took us into a favela, which is something we would never have done without locals.

Despite the beauty and intense metropolitan buzz of RDJ, many of the surrounding neighbourhoods are actually slums controlled entirely by drug lords. Paolo, who is a police officer, told us (in broken Spanish and via Jo’s patchy English) that he can’t even wear his uniform into the favela for fear of being shot because police authority is not respected and cops are actually seen as a threat.

When we visit with Jo and Paolo, they tell us very seriously not to speak any English above a whisper, as it might draw unwanted attention to us. Over 6 million people live in the Rio, but that number more than doubles when you include the overflowing favelas that sit only a subway ride away from Copacabana Beach. Life is certainly not the same for those who live on the outskirts of Rio, and tour companies have even started taking travellers on guided tours of popular favelas just to experience the stark contrast.

I don’t know how authentic the experience would be on a guided tour, but we are really amazed by the experience we have and feel incredibly lucky to have met our Brazilian friends.

On our final day in Rio, we take a time-out from the established routine and visit Pão de Açucar, the stunning Sugarloaf Mountain that overlooks the city and has amazing views of the famous Cristo Redentor, aka Christ the Redeemer. We take the cablecar up and enjoy sprawling views of all the beaches we’ve lazed over this past week, and I’m honestly feeling so sad to leave. I am consoled only by the fact that my Brazil visa is good for another 10 years, so I have plenty of time to come back and do it all again.