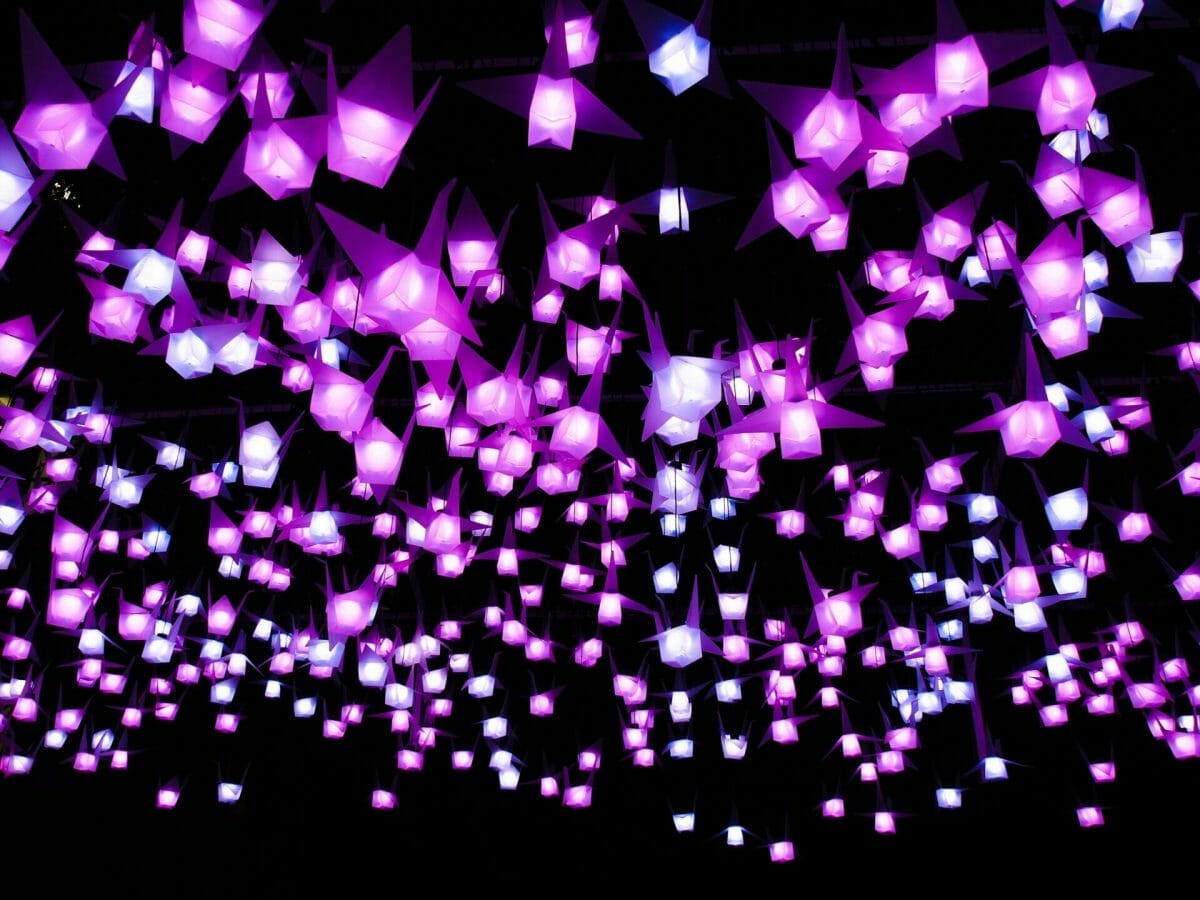 A complete guide to Vivid Sydney: Where to go & what to see

Every May & June, just as the days are beginning to feel a whole lot darker and the city settles (rather reluctantly) into scarf-weather, Sydney explodes in a festival of bright lights and enchanting colours that actually makes winter something to look forward to. Now in its 10th year, Vivid Sydney draws thousands of people into the city every single night (6-11pm) of its 3-week run, as precincts across the city are transformed by interactive light shows and sparkling art installations. The festival only gets bigger and better with each incarnation, and it’s no exaggeration to call it my favourite Sydney event of all time. Use this guide to make the most of your visit(s) to Vivid Sydney, exploring all the top areas and soaking in all the best views. No matter how you experience Vivid, though, you’re sure to be back for more.

Lights for the Wild at Taronga Zoo

Transport NSW puts on extra train, bus, and ferry times for Vivid, ensuring that you are able to get into the city without any dramas. As always, it’s $8.50 to catch the train to Circular Quay Station, from which it’s an easy walk to the Gardens, Darling Harbour (can also use Wynyard Station), and beyond.

It’s unlike me to ever recommend driving into the city at night, particularly for a notoriously hectic event like Vivid where there’s unlikely to be a street-park in sight, but I just discovered the beauty of Secure Parking’s pre-pay garages! Book a spot online for just $10-15 and park from 5pm-6am in one of several dozen different locations all over the CBD. If you’re coming into Vivid with a group, it’s actually cheaper than taking the train and, if you’re coming from outer suburbs, it’s definitely easier.

How to enjoy Vivid

Hop on one of the ubiquitous Vivid cruise boats and float around Sydney Harbour as you take in Vivid from the water. Most cruises are around 90 minutes long, include at least one drink and often a buffet, and depart from either the Man O’War Steps behind the Opera House, Barangaroo, or Darling Harbour. Check out Groupon for some truly unbeatable deals (~$20)!

Every autumn brings a new collection of artists to the Opera House for the Vivid Live concert series, an absolutely excellent way to experience Sydney’s most iconic music venue. Tickets can vary widely depending on the act, but most shows still offer some cheaper seating options so that everyone has a chance to enjoy. This year’s big names include Solange, Ice Cube, and Middle Kids, while previous years have seen Flume, Chet Faker, Taku, and Bon Iver take the stage.

Every Friday and Saturday night during Vivid, there is an amazing fireworks display in Darling Harbour. The pyrotechnics begin at 8pm, but it’s likely to get crowded, so find a good view on Cockle Bay early to avoid missing any of the action.

Pop-up Bars in the Botanic Garden

There are two different pop-up bars in Sydney’s Royal Botanic Garden, both serving up food, music, and a variety of drinks (including some amazing hot mulled wine) every night during Vivid. The prices may be a little steep, but you won’t find a better place to sit and enjoy the impressive lights of the Garden.

If you only do one thing during Vivid, make sure it’s the Light Walk from Darling Harbour to the Opera House. Begin your evening at the impressive water display in Cockle Bay, then walk up through Barangaroo, across Wynyard Station (which looks eerily like the inside of a space craft after the recent upgrade), and along The Rocks. After getting a great view of both the Harbour Bridge and the Opera House, walk all the way around Circular Quay to the Opera House and then across into the Royal Botanic Garden for the perfect finale. With so many amazing things to see and do, this is still the very best way to experience Vivid.

A long-time Vivid favourite, the Garden is brought to life during Vivid by several dozen art installations, ranging from small pieces to enormous, interactive light shows with their own soundtrack. Even walking the relatively short path from start to finish will take the better part of an evening, as you’ll inevitably stop to look at display after display of incredible lights and colours. Be sure to catch the amazing views back onto the Opera House as you first enter!

Art installation in the Garden

Light Tunnel in front of the Opera House

All around the Harbour, there are various installations that will make it difficult to move more than a few metres before stopping for a picture. Lights are also projected directly onto the buildings behind Circular Quay, best viewed as you walk towards either the Opera House or the Harbour Bridge, but the best area to hang out is Customs House, onto which elaborate story animations are projected. This year, we watched as Snugglepot and Cuddlepie, two Gumnut Babies made famous exactly 100 years ago by Australian author May Gibbs, rallied their friends to explore the city. Although the story may be aimed at children, it’s impossible not to be awed by the display and it is definitely a highlight of any visit to the Quay.

The Harbour Bridge aglow for Vivid

The façade of Customs House fully animated for Vivid

Sydney CBD all lit up

Unlike the buildings surrounding Circular Quay onto which lights are being projected, many of the buildings around Darling Harbour appear to have integrated lights, purpose-built for Vivid. The resultant light show is impossibly, well, vivid. The main installation is a group of glowing orbs in the middle of Cockle Bay, changing colours and shooting off streams of water every so often, and the combination of these colours and those from the buildings makes for some truly jaw-dropping scenery. As you walk towards the Quay, you’ll also see plenty of activity in Barangaroo, in the form of a light parade this year.

Ferris Wheel lit up for Vivid

Walking through Sydney’s historical waterfront district, you’ll catch fleeting glimpses of the Opera House and the Harbour Bridge, but you’ll be plenty occupied by amazing art installations along George Street and a particularly well-loved light display on the façade of the Museum of Contemporary Art. In past years, this has been my favourite place to just sit and enjoy the show. After you’ve watched a few rotations of the wild, sound-synced projections, wander over to the street food area in front of the Overseas Passenger Terminal for some overpriced dinner and complete sugar overload.

Light display on the MCA at The Rocks

Only a quick ferry ride away from all the action in Circular Quay, check out Taronga Zoo’s “Lights for the Wild” during Vivid for animal-themed, fully-immersive light installations that are sure to blow your mind. All proceeds support this not-for-profit zoo and its conservation efforts, so you can feel good about shelling out $24 for your ticket. Choose either a 5.30, 6.30, or 7.30pm entry time and then spend the next few hours walking through the zoo and seeing the lights from above on the Sky Safari cablecar.

Crocs at Lights for the Wild

Wasp in the trees at Taronga Zoo

Beautiful seahorse at Lights for the Wild

Vivid actually extends far beyond the Quay and surrounding areas, lighting up Carriageworks, Luna Park, Kings Cross, and Chatswood with a rainbow of colours. And, each year, the festival expands to include more precincts and more installations than every before, ensuring that no two Vivid experiences are the same. To truly make the most of this incredible event, venture somewhere out of the ordinary and discover a new favourite.

Vivid Sydney 2017: The absolute best part of winter in NSW

The Legendary Pacific Coast touring route: a complete guide to road tripping from Sydney to Brisbane