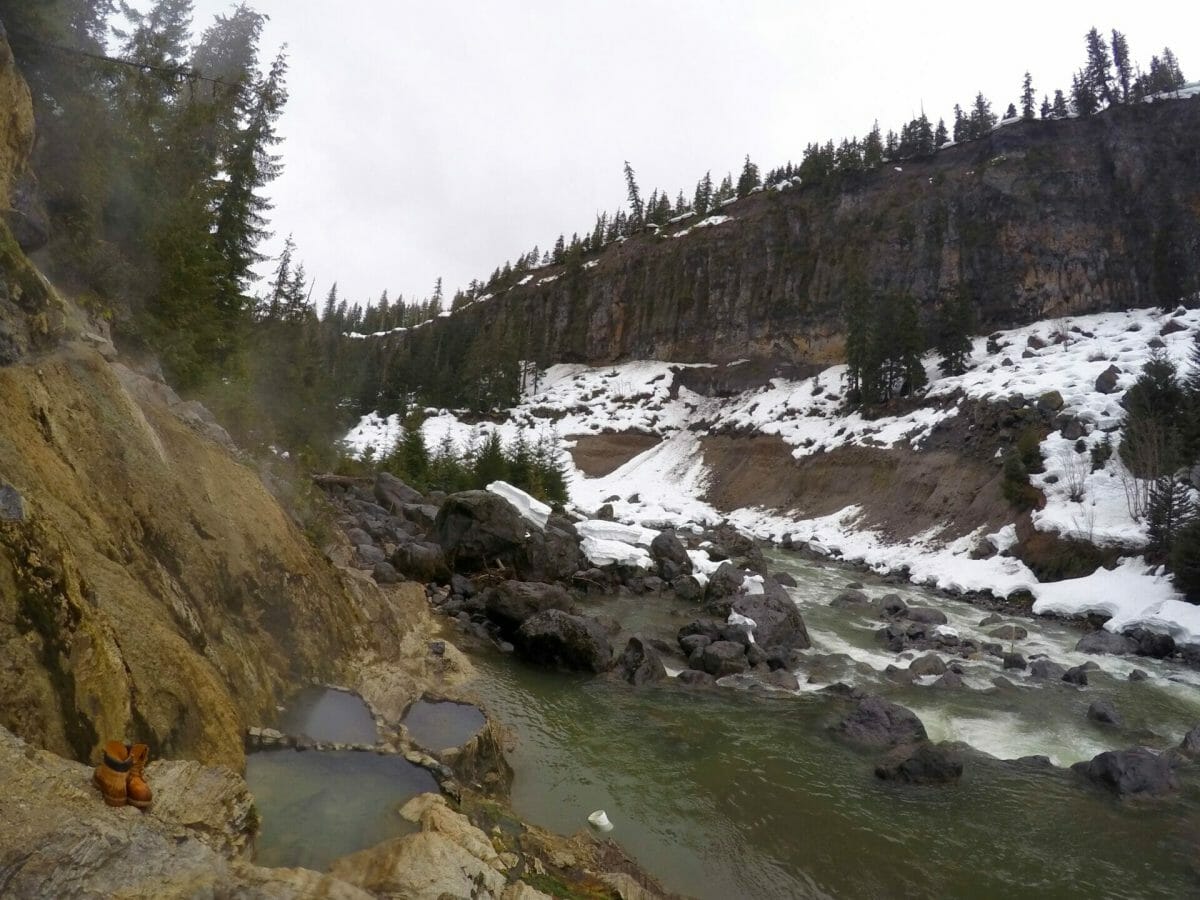 After spotting some amazing photos on Instagram— and subsequently messaging half a dozen strangers to get more details— Keyhole Hot Springs rose to the top of my Whsitler to-do list. I was drawn to the seclusion just as much as I was to the beauty, but all of the lovely people I spoke to assured me that it was relatively simple to find despite its out-of-the-way location.

This proves untrue, at least it for me, as I seem to be unable to follow even the simplest of directions. After taking a very silly wrong turn and driving over an hour in the wrong direction (and then driving another hour to get back on track), we eventually find the desired (and very unsealed) forest service road and drive at snail-pace down it for what feels like ages. We pass a little check-in booth, where one of the forest service employees gives us a slip of paper with directions to the correct carpark, and then it’s only a few minutes longer until we are parked.

Everyone I spoke to about the hot springs told me that it would be best to arrive early morning to miss people, which is why we left our Whistler condo at 9am. However, due to factors seemingly out of our control (but, in reality, totally our own fault), it’s rapidly approaching 2pm by the time we set out for the trailhead. The park employee told us that the walk should be about 30 minutes, an estimate that we took to mean “20 minutes for athletes like you”, so I am trying to hurry everyone along to avoid running into other people in the springs—my enjoyment of a place is usually a direct factor of how many other people I am forced to share it with. And I also hate other people in my photos. Just one of those things…

What follows is a terribly frustrating several hours, wherein we walk the snowy trail with mounting concern that we’ve missed the turn. This fear is finally realised when we reach an “end of trail” sign after we’ve walked for what feels like an hour. Still set on finding the hot springs, we turn around and retrace all of our steps along the trail, following every possible left or right turn to its end. This is more challenging than it might normally be, considering that it’s March and the snow cover is starting to melt in a few places, occasionally leaving the easily followed snow tracks abruptly cut-off and us frantically scouring the vicinity for where the tracks might pick up again.

We make it nearly back to the trailhead before seeing two people descending from the carpark. Determination renewed, I ask if they’ve visited before (one of them had several years previously) and if they mind us following their lead (they did not mind). We set out again along the track, but do eventually make it all of the way to the “end of trail” sign again, where our new trip leader continues onward and we realise our mistake. After walking on for another half hour, the locals turn and tell us that there is a hot spring upwards and another downwards, so we split downwards and carry on for only a few minutes before we see steam rising out of rocks right near the river.  Excitedly descending, we are finally standing in front of three hot spring pools, each totally empty, and not another soul in sight, the local couple having carried on to the upper hot springs another 20 minutes away.

Satisfied that we don’t have to share our hot spring with anyone else, we relax (after dumping several buckets of cold river water into the pool to cool it down). The full-day journey has been entirely worthwhile and the photos I’d drooled over before coming hardly do the spot justice.