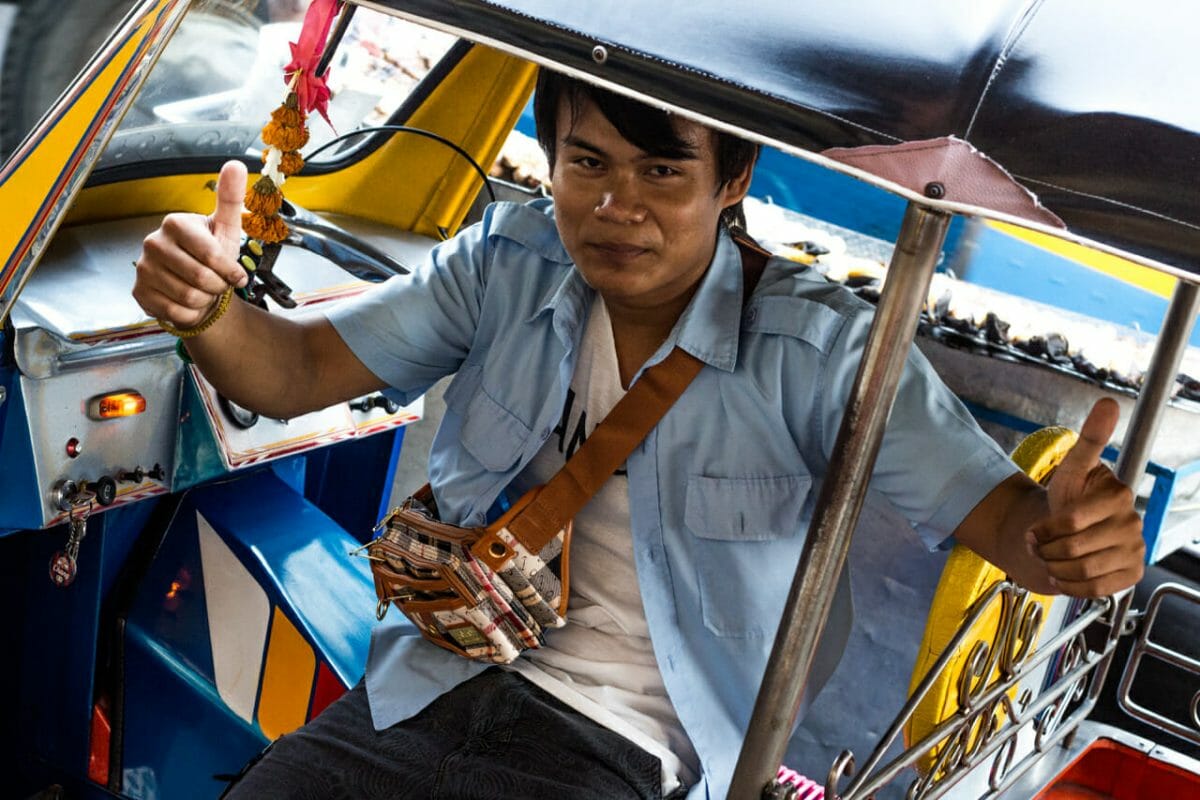 Inspired by The Beach, which I just finished reading, I want to stay right in the thick of things on Koh San Road. We are not disappointed, arriving in the evening to absolute chaos. The street is filled with market stalls and food vendors, but it is also largely occupied by the thousands of chairs and tables that restaurants and bars have placed out in the middle of the road. Those tables are filled by drunk and drugged up travellers, smoking hookahs and shouting loudly at one another. There are also a noticeable number of ladyboys out on the prowl, and I am amused to watch some drunk American boys think they’ve picked up two hot Thai babes.

All the detail: Bangkok

Getting there: Fly into Bangkok’s enormous Suvarnabhumi Airport.

Where to stay: When you arrive in Bangkok, head straight to Koh San Road and find a hotel on this colourful, bustling street.

Top tips: If you, like us, are a bit tired but still want to explore this sprawling city, make a deal with a tuk tuk driver to zip you around all day— we paid a preposterous 10THB for this, the only caveat being that we needed to make a few commissioned stops for the driver.

Our hotel is on the fourth level of a building, sandwiched between two clubs above and below. The walls appear to be made of paper and it genuinely feels like the roof may collapse from the bass. Also, it’s basically closet sized and we struggle to enter with our bag.

We spend the next couple of days joining in on the festivities in the street, existing purely off phad thai and what we believe to be beer. It turns out not to be beer, and is probably worse than even warm goon, but it’s 4 standards for $1, so we both recognise that we are in no position to complain. We end up sitting outside of a very large and rowdy pub, making drinking friends with several German guys and the Welsh girls they are trying to pick up. As I am known to do, I drink like a fish and smoke hookah like it’s air until I do what I hope is a sneaky vom under the table. Of course, everyone in a 20m radius sees and some girls make a huge fuss of bringing me water, so I naturally grab and skull Aristo’s full beer to save face.

Several ill-advised nights on Koh San Road and I am ready to swear off drinking (a pact that lasts all of 24 hours). The sunlight is unpleasant and the thought of walking makes me want to puke, so we set out to find a tuk tuk that will drive us aimlessly around Bangkok for the next 6 hours on a sort of pseudo sightseeing tour. Somehow, we do find someone willing to do it for 10baht (30c…wtf) on the condition that he takes us to a couple jewellery places, where he gets paid commission for just bringing us through the door, regardless of whether or not we buy something.

He turns out to be positively lovely, and even buys us sandwiches for lunch (which I promptly drop half of). To make up for it, he buys us street phad thai from his favourite vendor, and I must say, it’s the best I’ve ever had. He takes about 20 photos of us over the course of the day and tells us all about his life.

When evening rolls around, we are sad to leave, but we have a bus to catch! We manage to land in non-reclining seats and are dropped off at 2am (after no sleep) to wait in the night for another bus that will bring us to our ferry. But, no matter, we are island bound!

Read more about our travels through Thailand:

PHOTO JOURNAL: DROP EVERYTHING AND GO TO THAILAND