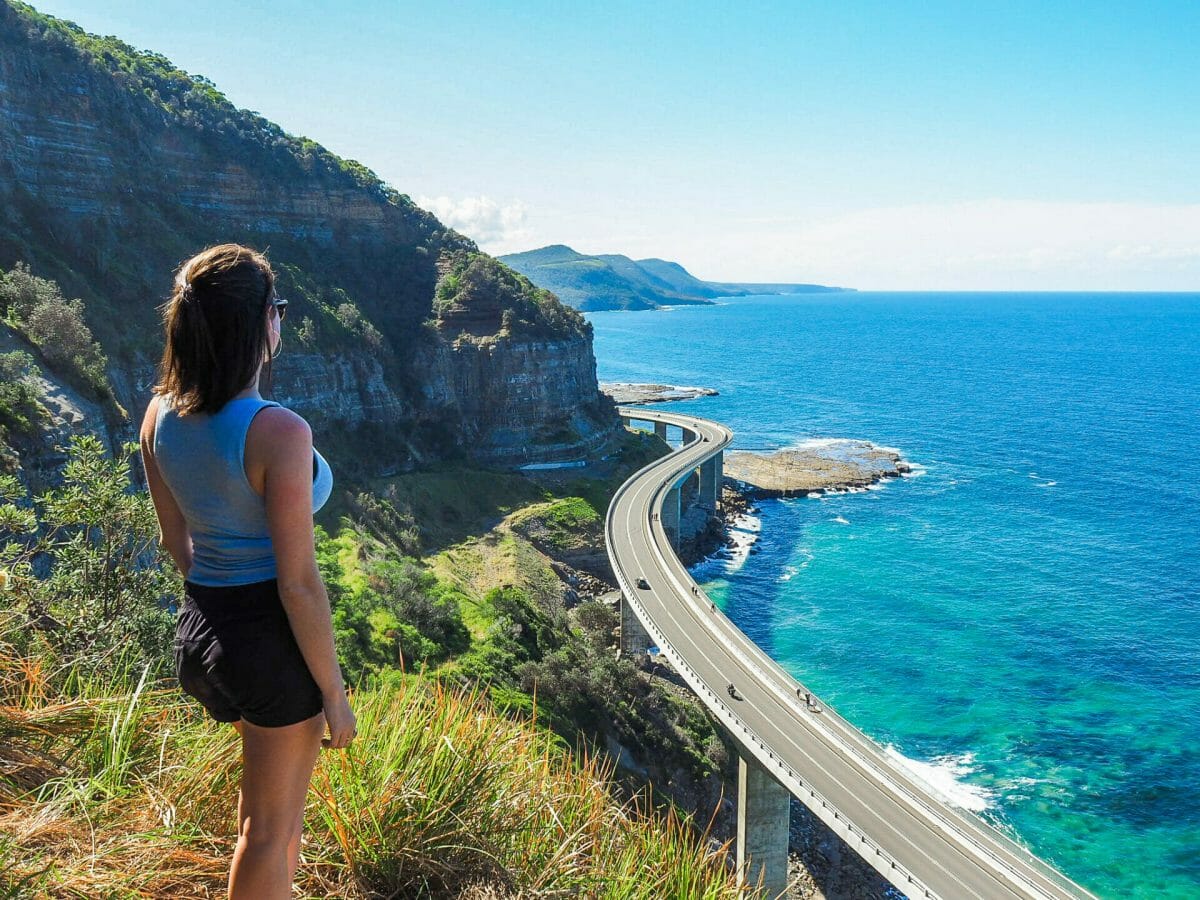 Despite the popularity of Clifton’s serpentine Sea Cliff Bridge among tourists and locals alike, the vast majority of visitors actually have no idea where to go for aerial views of this iconic Illawarra landmark. In fact, I’ve lived within 30 minutes of this bridge for the last 5 years and I only very recently discovered the proper pathway myself (and not for lack of trying)!

After years of bashing through the bushes to get a view of the coastline (and sometimes even bashing through the bushes to find nothing in particular, getting lost in the tangled vines), I am eager to confirm that all rumours of a proper trail to the scenic viewpoint are entirely true. Without further ado, here is absolutely everything you need to know about hiking to the secret Sea Cliff Bridge lookout for one of the best views in the entire Wollongong-Illawarra region.

Getting to Sea Cliff Bridge Lookout

Sea Cliff Bridge stretches between Clifton and Coalcliff, about 70km south of the Sydney CBD and 20km north of Wollongong. Although it is possible to catch a train to Scarborough station and walk the short distance to the bridge, most people prefer to drive, parking at the south end in the designated car spaces on the ocean-side of the road.

Crossing the bridge, you’ll see a very small gravel parking area right at the start of the bridge, sitting just in front of the Sea Cliff Bridge sign (visible in the photo below). It is from this parking area that the trail actually starts– don’t blink or you’ll miss it! Pass through this clearing in the bushes and begin walking upwards along a crude dirt trail.

UPDATE: A concerned reader recently messaged to say that access to this trail is now restricted. I can’t verify the accuracy of that statement myself as there were no signs or physical barriers to the trail at the time of writing, BUT if these do now exist, obviously I do not condone trespassing.

The path to the lookout is often lost in the leaves, but it’s not overly difficult to follow, especially given the yellow ribbon that some kind soul has tied to trees and bushes throughout to keep you on track.

In a few sections, the dirt is extremely loose and the trail can get a bit steep, so just prepare for a little bit of scrambling. When you come to the steepest climb yet, a garden hose has actually been knotted around a tree to act as a rope and aid in your ascent. Before making your way up, however, continue on 10 metres to the right and peak out of the trees to see Sea Cliff Bridge below.

This lower lookout offers a great vantage point, and is actually the only lookout I knew of before finding this proper trail, but the upper lookout still takes the cake. Not only is the site just slightly higher, but the ground is a lot more level, allowing you to get out from the trees and take a better photo. If you do take photos at this lower lookout, be SUPER CAREFUL and watch your footing— it’s incredibly steep and the loose dirt is just waiting to shoot out from underneath you.

UPDATE: I would just like to reiterate once more that the ground here is incredibly unstable and you should exercise extreme caution when walking out to the lower lookout. If you’re unsure, just skip it and head straight to the upper lookout, which is a bit safer. In both instances, though, BE SAFE.

People have died at this lookout, so it’s no joke. Visit at your own risk.

Continuing upwards for another few minutes, you’ll finally come to a bit of a clearing and then the upper lookout, which is simply spectacular! Even on a sunny weekend, I only crossed paths with one other couple, so expect to enjoy the view mostly to yourself.

From here, you can see the road winding around the cliffs, watch little people-shaped specks walk up and down bridge, and see the coastline in all its blue glory.

In total, the walk to this incredible secret lookout is only about 10 minutes, with the lower lookout halfway along the trail. Even though there’s still a bit of bush whacking involved and you’re likely to end up with a fair amount of dirt in your shoes, getting to this viewpoint is the most worthwhile 10 minutes you’ll spend all weekend.

A quick reminder to be cautious!

UPDATE: Late September 2018, one visitor attempting to reach a lookout over Sea Cliff Bridge sat on loose soil, slid down the face of the cliff, and fell to his death. Based on reporting in local news, it appears that this group walked along train tracks and scaled a fence, and although I would strongly discourage trespassing or other unsafe routes to reach a viewpoint (walking along the tracks is illegal!), my sincerest sympathies are with the victim’s family and his friends.

This horrible tragedy has been felt by the whole community, but if we can learn anything from this story, it’s that hiking and bushwalking are inherently risky and that accidents can often be catastrophic.

Just last month, my stepmum had to be heli-lifted of a mountain after a climbing accident and my dad was evac’d a couple years ago when he fractured his ankle on a summit— both of them have extensive mountaineering experience (45+ years!), but accidents are still possible!

When any of us are out in nature, we need to:

Another Grape Day Out Here in South Australian Wine Country