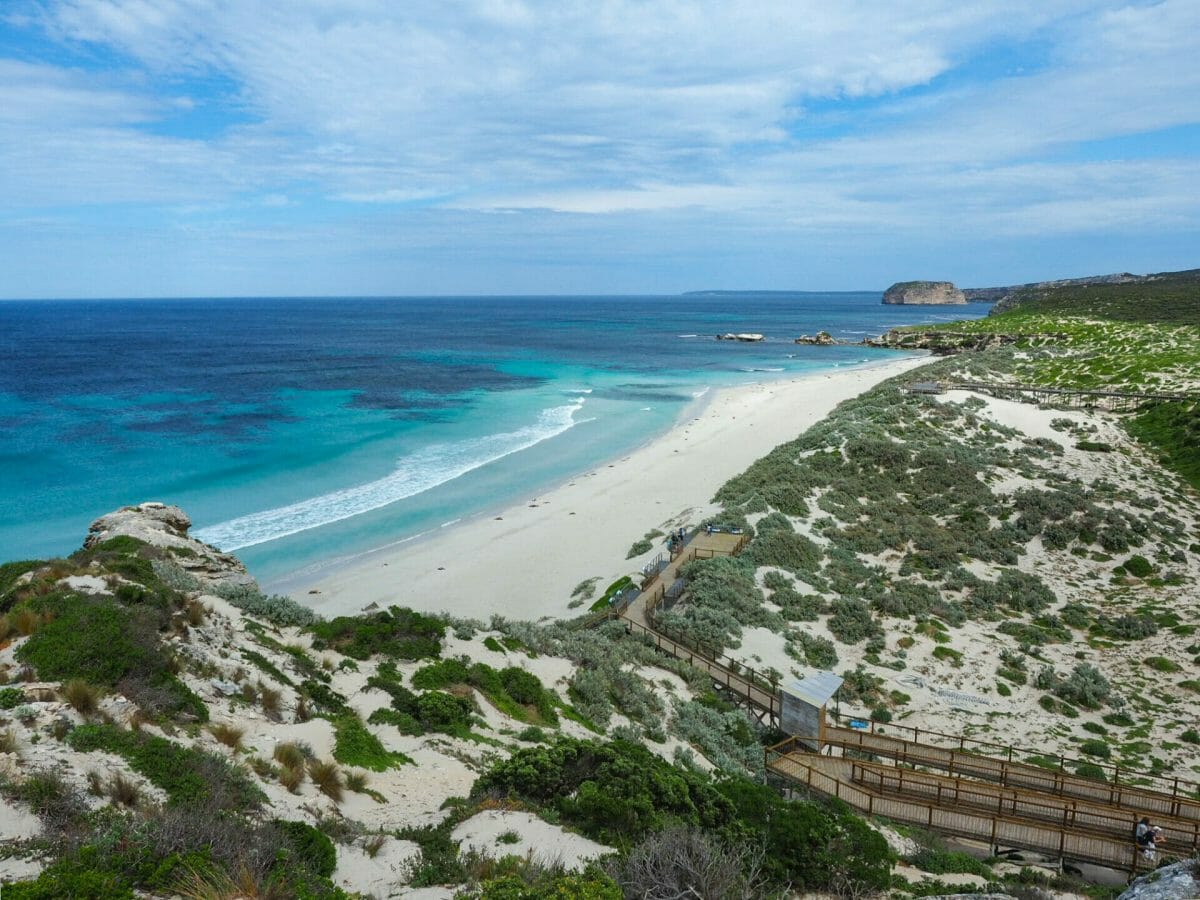 Our final day on Kangaroo Island is entirely bittersweet— excited to be exploring more of this island paradise, but devastated to be heading back so soon! As we make our way from Flinders Chase National Park in the west to Penneshaw in the northeast to catch our ferry back to mainland, we have an opportunity to check out a little of the southern coastline and squeeze in some more of KI’s stunning scenery.

Our first stop of the morning is at nearby Vivonne Bay, a pristine beach with bright white sand and unbelievably clear water. Although I’m not really surprised anymore, I’m still impressed to find the beach completely empty. More scenery for us!

All morning, clouds have been threatening to roll in and, quite literally, rain on our parade. Obviously the grey weather that finally does arrive when we reach Seal Bay is less than ideal, but I’ve started to think of good weather as being on some kind of quota system and it’s made me surprisingly more tolerant. If we have to endure a certain number of grey, drizzly days in order to have sun and blue skies on other occasions, it was actually really lucky that we got our two perfect days earlier this weekend when we were in the national park doing all of our walking. And as far as grey days go, this is pretty mild!

We pay $16 each for a self-guided tour of the conservation park, and head down the boardwalks towards the beach. Already, we can see a number of seal-shaped specks waddling around in the sand and we pick up our pace in excitement. Passing the enormous, beached remains of a juvenile humpback whale and quite a lot of beautiful views on the way, we finally reach the closest platforms and look down on several hundred Australian Sea Lions barking and wobbling about below.

These rare and beautiful doggies of the sea are some of only 12,000 remaining Australian Sea Lions in the world, now found exclusively in parts of South Australia and Western Australia. Previously hunted to near-extinction for their meat, oil, and fur, Seal Bay is actually one of the largest colonies of Australian Sea Lions today and aims to preserve this vulnerable population by protecting the surrounding area and educating the public.

Obviously mesmerised by these adorable animals and in awe of the conservation work being done on their behalf on Kangaroo Island, I still find myself entirely hung up on the fact that “Seal” Bay is a conservation area for “Sea Lions”.. As it turns out, though, Australian Sea Lions are a type of “eared” seal (Australian Sea Lions and other eared seals have, well, ears, and also sufficient musculature in their flippers to waddle around the beach, in contrast to non-eared seals, like Leopard Seals). I read all of this information on a plaque as mum and I look eagerly down at a sleeping daddy Sea Lion directly below us that I am psychically willing to get up and prance around for my camera. He eventually stirs and makes quite a performance hauling all 400kg of himself down to the beach, flopping over just before he reaches the water and rolling around on his back. I am reminded a bit of my cat, who also thinks that 10 metres of walking is enough exercise to warrant a nap.

Mum and I spend a bit over an hour watching as nature unfolds in front (even witnessing one of the most magical reunions of all time as a pup cries for his mum for 20 minutes before the mum waddles ashore and her baby runs across the sand to meet her, both barking their unique call to each other). We both agree that the experience was well-deserving of all the hype and the perfect destination to conclude our time on Kangaroo Island.

Puppies of the sea

Big papa seal waddling back down to the sea

Before we actually make it back to Penneshaw for the ferry, we do manage to stop in at Kangaroo Island Spirits to try their amazing range of gins and make time to wolf down a quick pizza at nearby Frogs and Roses. I’m more than a little devastated to be returning to the mainland before we got to see and do every single thing on the island, but we’ve enjoyed ourselves so thoroughly that it really is difficult to stay sad for long. What an absolutely magical place we’ve just been.