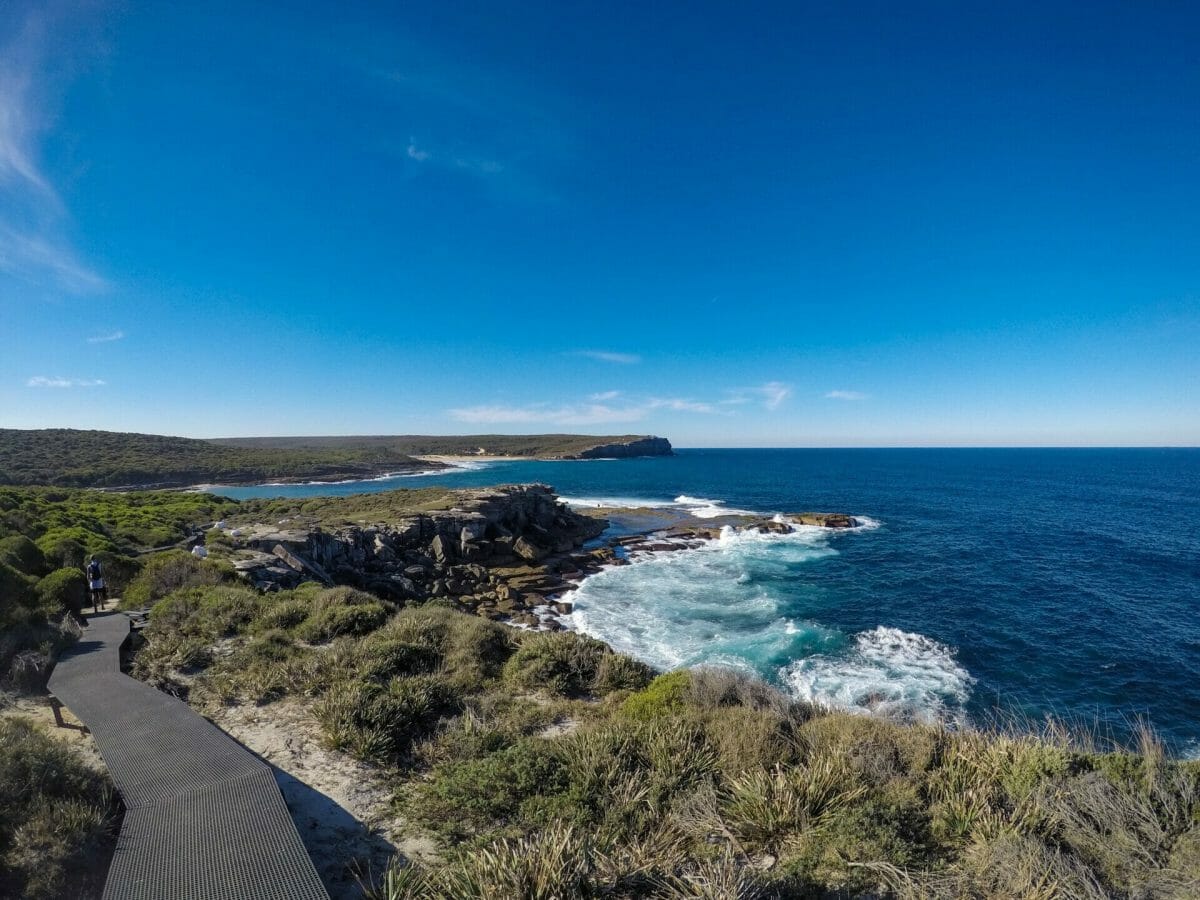 This weekend, I finally set out to walk the amazing Coast Track from Otford to Bundeena, which has been something I’ve wanted to do for years now. And I’m happy to report that it did not disappoint! We had amazing weather all day and managed to tackle the 32km walk in about 10 hours (including a relaxing lunch break and an hour of swimming at Little Marley Beach). All in all, it was a swinging success and I can’t wait to do it again as a two-day hike.

The Coast Track runs for 26km along the coast of the Royal National Park between Sydney and Wollongong and showcases the best of the NP, all in one hike. I would even go so far as to say that this walk is one of the best in all of NSW, and we have heaps of fabulous walks, so that’s really saying something. The trail starts in Otford, roughly 1km from the train station, and finishes in Bundeena, about 2km from the ferry wharf, although I think the walk is more popular in the reverse direction if you’re coming from Sydney.

I roped my lovely friend Ben into doing the hike with me this weekend, so we sat down on Thursday to plan what was going to be a two-day backpacking trip. Unfortunately, North Era, the main campground along the walk, was fully booked, so we quickly adjusted to a one-day plan. A big day, definitely, but totally doable.

On the day, I wake up at 530am (which is about 3 hours earlier than I’ve ever woken up in my life) and pick Ben up at his house just after 6am. The drive up to Otford is about 35 minutes, but I obviously have to make several stops to take photos of the sunrise (I could count the number of sunrises I’ve seen on one hand, so it was an exciting time for me). We pull into Otford station at 7am and quickly take off walking to the trailhead, which is actually the steepest part of the entire hike.

Over the next two hours, we walk through beautiful forest trails that offer peeping views of the coastline and eventually pass through an incredible rainforest called the Palm Jungle. I take lots of photos of Black Boys along the way to show Cal, who absolutely loves them (they are plants, I’m not actually photographing ethnic children, just fyi).

We scamper down off the track to poke around Burning Palms Beach, but don’t go all the way around to the Figure 8 Pools in an attempt to avoid the temptation to spend the whole day swimming. Back up on the trail, we take a mistaken detour up an incredibly steep path that turns out to be Burgh Ridge Track. The whole ordeal costs us about 45 minutes and 3km, but we are soon back on track and motoring along on the correct path.

Around 8km in, we pass North Era Campground, which is in the most beautiful spot just off Era Beach. It’s incredibly secluded since it’s only accessible by hiking in, and the beach is shared only with a few tiny cabins dotting the hills above North and South Era. I definitely hope to come back and do the walk again so I can stay in this beautiful spot. Although, it is really nice to be wearing a light daypack today..

After passing the campground, we have a relatively steep climb up onto Thelma Head, but it’s totally worth it for the views over North Era Beach. Already, I am loving this hike so much.

We descend the headland on the other side to walk along Garie Beach, where I tried to surf years ago and lost my swim bottoms in one of the most embarrassing moments of my life. Not saying that this trauma is the only thing standing in between me and a career as a professional surfer, but I’m also not saying that it’s not. We will never know.

Incredibly randomly, we walk right by Ben’s uncle who’s just come out of the surf, so we stop for a bit of a chat before continuing on to the half-way point at Eagle Rock for our much-needed lunch break. We enjoy an hour of relaxing in the sun with our sandwiches and are feeling recharged for the second half of the hike.

We are going strong through Curracurrang Cove, but start to wilt by the time we reach Wattamolla, which marks the 17km point. We’ve really done more like 23km, given both our intentional and mistaken detours, so I’m really starting to feel it in my ankles. I am definitely regretting the decision to wear runners instead of hiking
boots, having foolishly chosen the lightweight option over stability. A mistake I will not be making again.

We aim to make it to Little Marley Beach by 3pm so we can enjoy a swim break, and this requires us to keep a fairly aggressive pace despite the fact that my ankles are feeling like jelly. Morale is definitely low as we reach the beach, but the ocean instantly makes everything better. It feels so good to be out of my shoes and into the freezing water. The pain in my feet is a distant memory.

After our swim, we dry off in the sun and then get back into our sandy clothes to finish the last 6km of this hike, but we leave our shoes off for about 20 minutes as we walk across Marley Beach. Even more than at the start of the hike, I’m half jogging to keep up with Ben, whose legs are easily twice as long as mine, but it’s ok because I’m super eager to finish the hike before I collapse from exhaustion.

Our last major milestone before the end of the trail is Wedding Cake Rock, where we hop the fence and I force Ben to take the classic tourist photo of me. He’s fuming at all the international tourists who are leaving rubbish around and just generally doing idiotic things (like hanging off the sandstone rock, so soon after someone died doing that exact thing…), so we quickly leave after I get my photo.

On the home stretch, some girls overhear us saying that we are tired and strike up a conversation about our hike. They are both Sydneysiders who’ve come down to do the 45 minute walk to Wedding Cake Rock, so they are shocked to hear that we’ve been walking since 7am.

When our plans to get a lift from Ben’s cousin from Bundeena back to our car in Otford fall through, we ask the girls to give us a lift to Sutherland train station on their way home, which saves us the 2km walk to the ferry and the train ride from Cronulla to Sutherland. Thank goodness we get a lift, because no way am I walking another step, let alone 2km.

Once in Sutherland, though, we look up the train schedule and learn that the next train to Otford isn’t for almost 2 hours. We are both dying to get home and rest, so we are pretty miffed about the situation. Thankfully, Cal has been working in Sydney and is able to pick us up on his way through in about an hour’s time, so we go eat Indian for dinner and discuss our incredible day while we wait.

Finally, Cal delivers us back to Otford station around 7pm and we drive home. It’s been the most amazing hike, but I am so exhausted that all I want to do is get home and pass out. But definitely not before a hot shower.

Despite the exhaustion, I am so pleased with the whole adventure and feel really accomplished that we were able to tackle 32km in one day, definitely the longest hike I’ve ever done in a single day. The fact that we were able to do this is certainly making me feel a bit more confident about my upcoming 11-day, 180km trek around Mont Blanc. A few more training days probably wouldn’t hurt, but we did it!

9 amazing things to do in Perth, Western Australia