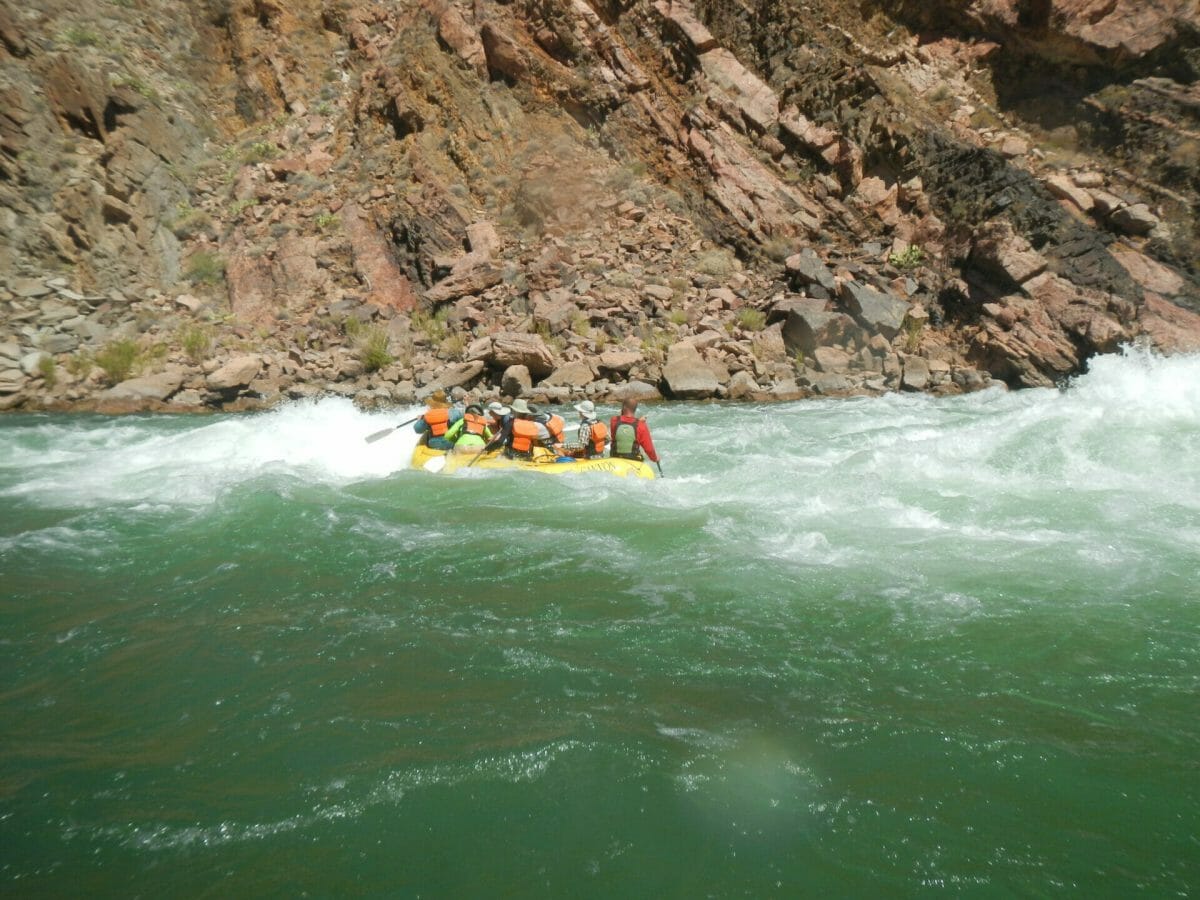 Rafting the Grand Canyon from Pipe Creek to Diamond Creek

After a year and a half in Australia, I finally came home for my first visit and my stepmother jumped on the opportunity to book a family holiday for her 50th― a hiking and rafting trip through the Grand Canyon. Apparently this was something she had long been waiting to tick off her bucket list, and of course we were all excited to be a part of it.

Eileen, Dad, Derek, and I all flew to Arizona and made our way to the Grand Canyon, where we had a pre-departure meeting with Canyon Explorations, the rafting company that would be taking us along the Colorado River.

And then Day 1 began with a 4am wake-up call so we could all rendezvous to begin our descent. I have never been one for early mornings, so this was particularly painful for me. Then factor in the pitch dark and the cold morning, I was not loving life at that moment, but things were angling to improve quickly as the adventure began.

We started down the Bright Angel trail with two other families at 430am and it wasn’t long before I realised that, while things might be improving, it would not be too quickly at all. The trail was amazingly steep downhill, which shouldn’t have been a surprise given that we were trying to reach the river at the canyon floor, but I’ve got knees easily triple my age and they were shouting out to not take another step down the hill.

To add more whining to the story, it was also heating up at an alarming rate. If I was displeased with the cold at 430am, I was definitely loathing the scorching temperatures that came around by 8am as we passed the midpoint at Indian Gardens― easily near 35C already.

The name of the game during the second half of the hike was “stay cool at all costs”, so we drenched our shirts at ever spigot and employed some nifty cold neck wraps that Eileen had bought for the whole family. I was feeling nauseous from the heat already and dad’s insistence that I eat the very warm cheddar cheese in my bag was not improving matters, but leave it to the trail to take my mind off things. The next few miles descended via a series of steep switchbacks, the so-called Corkscrew, and I was practically crying with happiness when we arrived, just before 10am, at Pipe Creek Beach (near Phantom Ranch) on the Colorado River.

Our river guides and our rafts were all parked waterside, waiting for us along with another family that had begun their trip several days up-river.

It was straight into the water for me, clothes and all. Thankfully the river was ice cold despite the air temperature hovering around 45C, even in the shade. I was painfully aware that it was only 10am and that the worst was yet to come, so it was important to capitalise on the swimming time to try and drop my body temp before we loaded into the boats and set out on our 8 day journey through gorgeous canyon scenery (and horrendous canyon climate). Despite these efforts, I basically spent every daylight hour fighting a losing battle with heat sickness, but I still managed to enjoy myself thoroughly, which is truly a testament to the fun we were having.

Ryan, our lead guide, was prone to begin each day by quoting John Wesley Powell, the first known person to explore Grand Canyon:  “it will be a journey fraught with peril…What dangers lie ahead, we know not.”

All in all, we rafted 135 miles through the impressive Grand Canyon, passing through notable landmarks like Horseshoe Bend. The definitive highlight for all of us was the hike up Havasu Creek on Day 5, where we left the hellish heat of the canyon and the grey of the Colorado River for an amazing, shady oasis and magical turquoise water. Eileen and I easily spent an hour just soaking in the water and taking the beauty in.

At every opportunity, the guides had us out of the rafts and exploring side canyons or hiking up to waterfalls― there was never a moment to be bored. Even in the evenings, after we all set up our sleeping bags at that night’s camp, we floated on top of the tethered rafts, drinks in hand, and chatted to the other families.

In the days, we were all spread across the five oarboats (piloted by the guides), the single paddleboat (white-water rafting style with 6 people paddling and one guide), and the two inflatable duckies (small white-water kayaks for the more extreme). According to my dad, who is a steel vault for facts like this, each oarboat weighed around 2,400lbs when fully loaded with our camping and cooking equipment, food, and personal bags (we each had one large dry bag that held our sleeping bag and any other personal bits like clothing). The guides rowing the boats had to be incredibly strong, especially considering that we could move from Class 2 to Class 5 rapids throughout the course of the day.

Despite the challenging rafting conditions, we never did experience a boat flipping, which is apparently extremely rare. The closest we did get was during a particularly intense Class 5 where I happened to be riding in the very front of the boat with the two young girls, Nicole and Bea, and we genuinely all feared for our lives.

Most days, I rode in the oarboat as we travelled between campsites and to side canyons. When we reached camp each afternoon, which was usually a sandy beach with some good brush cover for the bucket toilet, we would form a bit of an assembly line and haul all the blue bags (full of our sleeping bags and clothes) and kitchen bits off the boats. Then we’d all scamper over to the pile to rummage through for our number, cart our bag off to a nice spot, and set up our sleeping bag.

Only twice did we use tents, so most nights we enjoyed the fresh air and amazing stars. I saw a few tiny scorpions scampering about at night, but this was delightfully exciting to me– I thought they were adorable and very fitting for the desert motif of our days. If it had been spiders, I would have been back in the boat rowing myself far away from land..

After we set up our sleeping quarters every night, we would get up to help with dinner prep or just go splash around in the water, depending on how many hands were needed. We ate amazingly well, considering that all the food was carried in the raft for several weeks and only kept fresh by very effective coolers and storage containers.

When we finally reached Diamond Creek, our departure point, on Day 9, we were a bit heartbroken to be parting ways with the guides. And with the river. I think my dad put it best in his own account of the trip:

When we unloaded our rafts for the last time, we had a sense of the Grand Canyon allure that our guides felt.  Some of these boatmen have been running the canyon multiple times per summer for over 15 years, and they talked about Colorado River water flowing through their veins.  It is truly an incredible place.”

The best alternative to The Wave: White Pocket & Vermillion Cliffs with Dreamland Safari