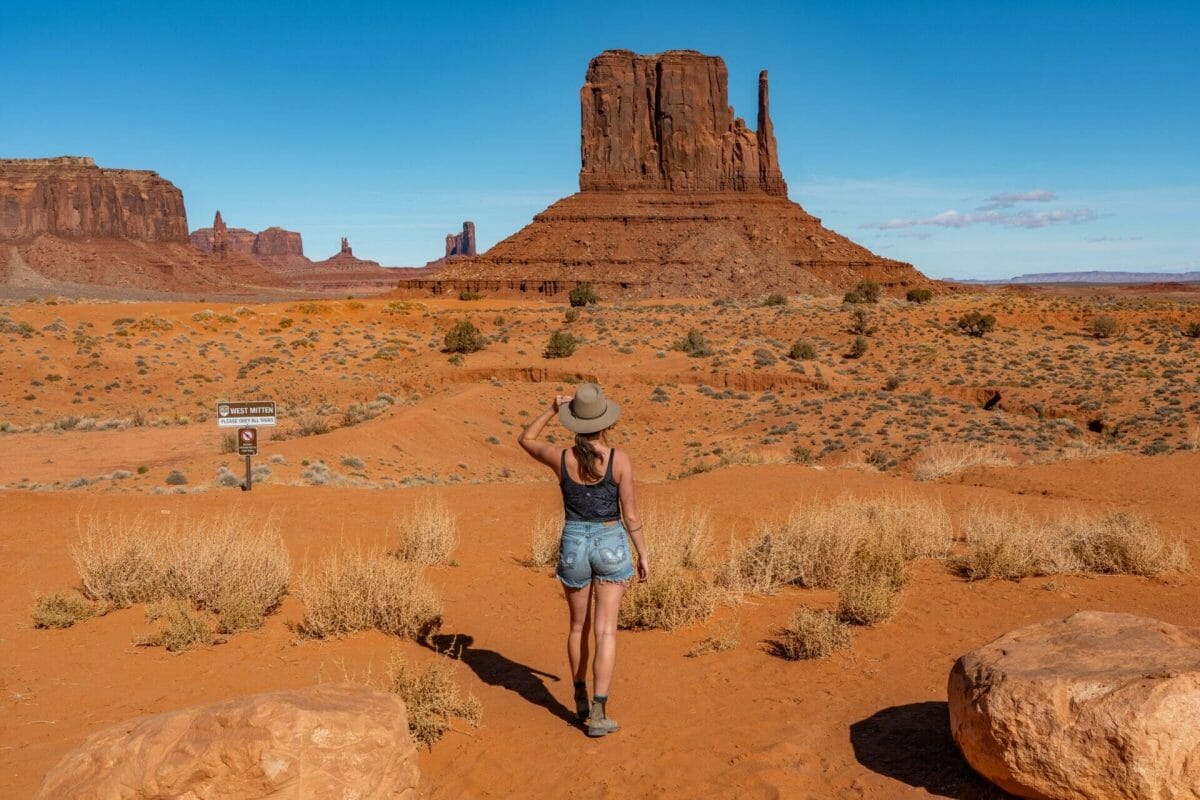 By mid-November, we wrapped up an amazing few weeks in New Mexico with an adventure through wild badlands and then travelled across several states en route to our ultimate goal of Nevada (and southern California shortly thereafter).

It was really our last week of proper travelling in the US before we’ll transition into full-on Mexico prep mode and start spending most of our days dealing with insurance logistics, permit problems, and a general plan for our voyage south of the border on the 2nd of December. And what a send-off it was!

Finally leaving White Sands behind after quite a few days frolicking around the park, we got back on the road Monday— and still had no idea where we were going.

I had originally suggested to go to Bisti Badlands, a supposedly otherwordly paradise of weird hoodoos and dramatic rock features, but Dan and I both feared that we were running out of time with our Mexico date fast approaching. Could we afford a 5hr, 2-day detour?

This is the question we asked ourselves and each other approximately 2,000 times as the drive began— we had about an hour before we needed to exit for Bisti Badlands, and we spent every minute of that debating in circles and settling on a decision only to backtrack our own choice.

With only moments to spare, we decided it would surely be worth a couple days and veered dramatically to the north.

And all concerns about the need to get to Las Vegas to handle van maintenance vanished while we wandered through the lunar landscape of rock pillars and grey hoodoos— there’s no doubt, it was worth it.

Hidden in the desolate landscape of northwestern New Mexico, the expansive 45,000-acre Bisti/De-Na-Zin Wilderness protects rolling badlands, fantastical hoodoos, and some of the state’s most otherworldly geology.

The best way to explore Bisti Badlands is by hiking deep into the rocks and clambering around between the striking formations— there’s no official route, no trail, and no signs, which leaves you entirely free to make it up as you go along.

My toe is still broken, but that didn’t stop us from meandering 10mi through the wilderness in search of the most bizarre scenery.

We even camped alongside the striated dust piles, waking up and forgetting for a split-second where I was as I spotted what appeared to be an alien planet out the bedside window.

Back on the road from the Badlands, our last stop in New Mexico was Ship Rock, a 1,600ft volcanic tower rising dramatically from the flat desert plains, which has sacred to the Navajo people for thousands of years.

It’s illegal to climb the rock, but it makes for a pretty impressive photo opportunity if you’re passing through the Four Corners region!

Leaving New Mexico behind, we drove through Arizona and made our first stop in Kayenta, right at the junction of the road that leads out to Monument Valley.

I’d wanted to visit the Navajo Tribal Park on my southwest roadtrip with Dad and Eileen last year (or even with Dan earlier this year), but COVID kept Navajo land closed that entire time and access only just re-opened for tourists.

Once again, it was a detour, but an incredibly worthwhile one! For $20, we had access to several areas of the park, including the 17mi scenic loop drive.

The deep ruts and steep hills of this rough dirt road were a constant surprise, but our van made it through just fine and we honestly enjoyed the unexpected ruggedness of the experience.

After swinging through Page, Arizona (mostly just for the Birdhouse fried chicken), we spent the end of the week back in one of our all-time favourite places: Kanab, Utah.

Between Page and Kanab (which are about an hour apart), there’s quite literally thousands of things to do— exploring sand caves, sledding down dunes, hiking The Wave or through White Pocket, day-tripping nearby Zion, Bryce Canyon or the Grand Canyon’s North Rim, Horseshoe Bend, Antelope Canyon, Grand Staircase-Escalante National Monument… you could spend months here and not exhaust the adventure possibilities.

This was our third time in Kanab, two of those times together and once just before we met (coincidentally, we were here about 1 week apart before we later met in Joshua Tree). We love Kanab so much that we’ve genuinely talked about moving here to explore Utah from this central SW base!

Our time in Kanab, as always, was a major trip highlight.

First, we spent the night camped in front of rainbow hills so bright they almost seemed artificial at Paria Townsite, a place both Dan and I had been recommended to visit but hadn’t yet seen.

With more time, we would have spent several days here, but as it was, we got out on a few short strolls around the rock formations and found ourselves the most central, scenic campsite of all.

To cap it off, we finally got to volunteer with Best Friends Animal Sanctuary, the country’s largest no-kill shelter and one of our all-time favourite animal charities!

We’d previously been to the property— a massive acreage with scenic overlooks, hiking trails, and thousands of domestic and wild animals awaiting adoption while receiving top veterinary care, regular social interaction, and even behaviourists who aim to rehabilitate animals with past trauma— and eaten several times at the onsite cafe, which serves an outstanding vegan buffet lunch for $5.

But this was our first time volunteering at “Cat World”, which consists of nearly a dozen buildings, each with multiple rooms that house 10-20 cats. The rooms offer shaded indoor areas and all have free access to a sunny outdoor catio, with plentiful beds, toys, and elaborate cat-walks built into the walls.

Our assignment was simply to spend the afternoon playing with the kitties in our room, brushing them and making sure everyone was getting some interaction. Almost all of the cats were incredibly friendly, clearly well-socialised by daily volunteers and sure to be adopted soon.

Only a few were skittish, but cute enough that they’d likely be adopted, as well!

In the lobby of our building were several of the special needs kitties who’d likely live out their entire lives in the shelter. They were absolutely adorable, so it was heartbreaking to think that few people would adopt a cat with severe neurological impairment— but here, they have a safe place with people who provide constant love and attend to all of those special needs carefully.

It was honestly inspiring to watch the carers and veterinary staff interact with the animals, for whom they clearly had so much love.

We had the best time volunteering with the kitties, even taking several out for a “walk” in a specially designed cat stroller (which I fully intend to buy for Henri) to ogle at the wild turkeys and mule deer wandering around the property.

By the time we left, we were covered in enough cat hair to knit a scarf, but smiling deeply.