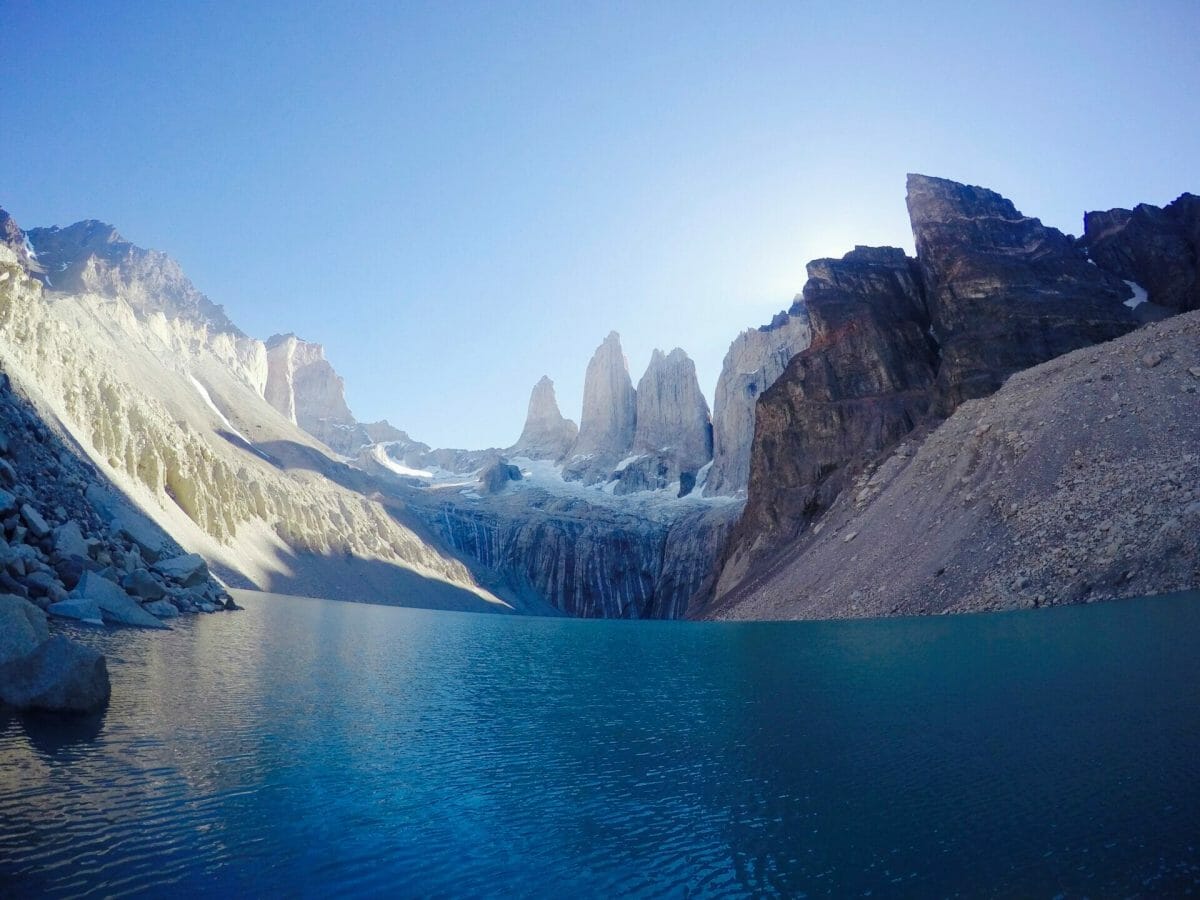 Sometime during our weeks spent volunteering in Peru, we caught wind of Patagonia. I knew hardly anything about what we would find in southern Chile, but I did know there would be mountains beautiful enough to reduce us to tears, so we shuffled existing plans and purchased pricey flights to the end of the world in search of some Patagonian magic.

A month later, after travelling through Peru, Bolivia, and northern Chile, we fly from Santiago down to Punta Arenas where we spend a surprisingly comfortable night at the airport on a make-shift bed of blankets and towels, nestled between our bags. We are just excited to be here.

In the morning, we catch a bus into the main town and then another bus to Puerto Natales, which is to be our base for the hike into Parque Nacional Torres del Paine. After dropping the bags in our hostel, we quickly set out to rent gear– a simple task considering every third shop is selling hiking boots,
booking tours, and (of course) renting out camping equipment. We carefully inspect sleeping bags, a tent, inflatable air matresses, a camp stove, and mess kit, spend five minutes teaching the owner to pronounce the word “inflatable”, and then scurry off to the supermercado to pick out an exciting variety of pouch soups and pasta sauces (also in pouches).

Despite concern about fitting even our scarce selection into our packs, we stock up on several boxes of Gato, the local red wine of choice. We also splurge last minute on some cheese, which ends up being the highlight of every meal.

The next morning, we set off on a bus into the national park, pay our entrance fee, and catch the catamaran across Lago Pehoe to reach Campamento Paine Grande, the start of our trek.

Thankfully, since we don’t actually arrive until about 2pm, I’ve mapped out a short first day for us: 11km to Camp Grey. We are not used to our packs being so weighed down with camping gear and hike slowly as we try to find our rhythm.

The hike is through a beautiful forrest (a large section of which has been burnt to a crisp by an idiotic hiker) and opens up about half way along to a series of small peaks from which we start to catch glimpses of the reason for our visit to this section of the trail: Glacier Grey. It really is “the bluest grey ever”, just as a poster claimed back in the park office. We hardly gain any distance, stopping every few minutes to photograph the glacier from different angles. The mirador is another half hour beyond the camp, but we decide, due to serious hunger, to just set up at camp for the night and visit the glacier in the morning.

Presumably due to the massive forrest fire set a few years ago, we are now permitted to use our camp stoves only in a designated enclosure. The result is no wind disrupting the flame and a deliciously cozy meal area, so I really can’t complain. Spiral pasta with salsa italiano and parmesan, soon to be a recurring theme, are on the menu tonight, plus some boxed Gato. Sleep is difficult, considering the sun doesn’t set until 11pm, so we play cards until we can manage to drift off. This is the only night we have difficulty sleeping; exhaustion works wonders to block out the glare of the sun.

Somehow, we manage to sleep until almost 10am and get another incredibly late start at hiking. After breakfast, we trek out to see more views of the glacier from the mirador and spend several hours scrambling along rocks to get closer, eventually just sitting and appreciating what an incredible sight ice can be. It’s late afternoon before we are back to Camp Grey and ready to start moving along the trail again.

“The W” hike is so-named because of the path it follows through the park, which means it features three different sections of backtracking. Yesterday, we hiked out to Camp Grey to view the glacier, only to turn around today and walk back to Camp Paine Grande, our starting point.

It was the original plan to cover that distance plus another 7.5km to Campamento Italiano, but it quickly becomes clear that neither one of us is willing to hike through dinnertime, so we end up stopping at Camp Paine Grande for the night. I’m delighted to have my pasta meal, but our short day today means that we must cover 22.5km tomorrow, an admittedly daunting distance.

We do not make another afternoon-start mistake today; we’ve eaten, packed our tent and backpacks, and are on the trail by mid-morning. The hike is studded with incredible views of snowy-mountain peaks above the glacier-fed river– probably one of the best parts of the park is the frequency of rivers and streams, all ice-cold and delicious to drink. It’s not long before we reach Camp Italiano and head 5km upwards to a series of miradors looking out over the Valle del Frances, the last of which is Mirador Britanico. The panoramic views of the mountains are unbelievable and I’m not sure either of our cameras do it justice.

After lunch on a rock, we head back down towards Camp Italiano and make our camping reservation for the last night at Camp Torres (!!) before heading onwards another 5km to Camp Los Cuernos, our final destination for the day.

In the final kilometre of the hike, we walk briefly alongside the most beautiful lake and the temptation to dive in is ever-increasing. Yet, we somehow manage to divert ourselves away from the lakeside path and spend the next 40 minutes bush-whacking through what was obviously once a trail (hence the confusion) that has long since been abandoned in favour of something more accommodating to the girth of a backpack. It is scratched and highly irritated that we finally emerge from the brambles into camp.

Due to deviations from the original itinerary, we have only camped at paid campgrounds thus far into the trip; tonight, though, I do not regret the 8,600 pesos ($17) because there are hot showers. Some girl in line for the bathroom tries to make conversation with me, but I am functioning at a level far below normal and can’t understand a word she’s saying. I later find out she’s Brazilian and consider the possibility that she was speaking Portuguese, in which case: obviously not my fault. More likely, though, I’m just brain-dead from hitting myself against low-hanging tree branches for the last hour.

The shower is amazing (I don’t even want to talk about how long it’s been since our last hot shower) and the 22.5km just wash away. Aristo and I cook soup for dinner and fall asleep before I’m even sure what’s happened.

Another efficient morning sees us out of camp around 10am for 22km of rising and descending past Hotel Las Torres and Camp Chileno until we reach Camp Torres, where we plan to drop our big packs and scramble an hour straight up the mountain to the Base de Las Torres. Spirits are high, the sun is stronger than ever, and the day flies by. By mid-afternoon we’ve reached Camp Torres (finally, a free camp!) and set up our tent.

The fast pace of the day requires us to have a brief rest before we can move again, so we cook an early dinner and leave for the hike to the final mirador. The first half hour is incredibly steep trails, followed by a half hour of boulder-scrambling across loose rocks to reach the base of the three peaks that give the park its name. We share chocolate cookies and oranges on a rock by the lake in front of the mountains, taking in the views all around us and trying not to drop things into the Laguna. The view is indescribable. Tired legs scramble back down and fall into bed early in anticipation of the 4am wake-up tomorrow, repeating the same uphill trek in time for sunrise.

The sunrise is greatly diminished by the unmanageable cold as soon as we finish the hike and sit in wait. It’s not long before we are both on our feet pacing just to keep some feeling in our limbs. We are both wearing every piece of clothing we’ve brought, but it feels like we are standing naked in below freezing weather. My time at the mirador is entirely spent jumping around and doing awkward shuffly dances to stay warm. A group of cold Italians suggest a dance-off.

As soon as we get back to the tent around 8am, we crawl back into our sleeping bags to recover. Around 11am, we are up from our nap, make noodles for breakfast, and pack for our last day. We only need to cover 10km today, backtracking through Camp Chileno and ending at Hotel Las Torres, where we catch a quick bus back to Laguna Amarga. From there, we board our return bus and journey back to Puerto Natales.

The hike is quick and we are eager to arrive back in civilisation, mostly just because we’ve run out of pasta. Honestly, we both wish we were continuing on to complete the Circuit, another set of trails around the opposite side of the mountains. The utter lack of food, however, leaves us with little choice.

A day trip to Isla Bartolomé, the most photogenic island in the Galápagos