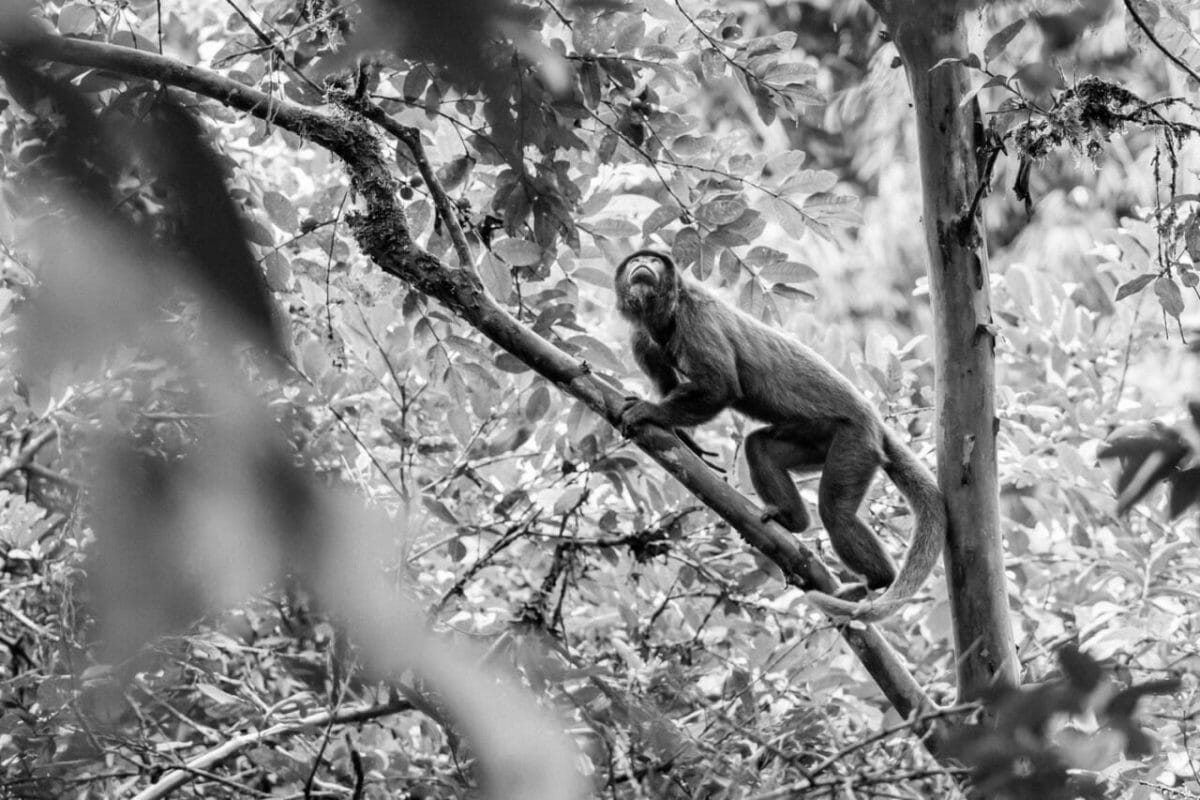 Playing with Machetes in the Amazon

After arriving to Chontachaka Nature Reserve via life-threatening 10 hour bus, we are introduced to our new best friend, Paola, the red howler monkey. Cheeky food-thief by day (seriously, will not get over her stealing my guacamole) and terrifying stalker by night, she is the most entertaining thing in the entire jungle.

Raul, the conservationist in charge of this reserve, takes us and the other volunteer on several plant-gathering expeditions. Paola dutifully follows behind us, occasionally above us, as we gently remove plants with roots intact to be transplanted in our planter. If Raul explains the point of this, I do not hear it. Though, this is highly likely, considering he only speaks Spanish, I have the Spanish comprehension of a toddler, and sometimes I get tired of asking him to repeat himself, so I just nod and occassionaly say “si, si” and “claro” to make it seem like I know what’s going on.

On this, and all our future adventures to the waterfall, or even while we are reading in the hammock, Paola accompanies us. Half the time, I love her and willingly invite her to snuggle in the hammock. Other times, like at night, she is simply not wanted around. She senses this, and actually bit the other volunteer, Kari, on the boob for trying to shoo her out of the bed at night.

I came to dread the inevitable hairy, little four-fingered hand that would reach out from the base of the bed and grab my foot in the night, waking me up to the horrifying sight of a monkey slowly slinking up between Aristo and me. This terrified me at night, but Aristo loved it and would literally push me out of the bed if Paola decided she wanted my spot. More than once, I woke up half off the mattress and looked over to see Paola and Aristo entertwined, their hairy arms wrapped around each other in peaceful sleep. I’m also 99% sure that Paola gave us fleas.

Over the course of our week in Manu, we take many hikes, plant many… plants, carry a lot of dirt, and dig a lot of holes. But there is one day, our last day, where Raul pulls out the machetes and lets us have some real fun.

Thankfully, Paola is no where to be found, as I suspect she would not hesitate to wrestle us for the knife and then run off with it, much like she did with Aristo’s lollipop the previous day. Though, I’m fairly certain he just handed that to her and is trying to pass it off like she stole it. I wasn’t born yesterday, ok, I see right through you.

Our task is to clear invasive species away from the banana trees, which Raul explains to us with the simple instructions “Platano? No. Otros? Si.” It’s four hours of knife-swinging fun in the middle of the jungle. We are like knights with blood-stained swords, protecting the sweet, innocent banana tree from an untimely demise at the hand of sinister weeds. Do not worry, my beloved yellow-peeled friend, we are here now.

After some side games of fruit ninja with stray coconas and various weed stalks, which Aristo throws at me while I do my best to slice them in half without taking my leg off (not so easy as it sounds), we are back to the task at hand. The Chontachaka dog, Princessa, is laying in a mound of plants and proving to be a worrisome obstacle, in that she occasionally and quite unpredictably rolls around when I am mid-swing. She already only has three legs, and now I’m wondering if it wasn’t a previous machete-gone-rogue that caused this. Luckily, we both complete our job without crippling any animals.

Finally, our wonderful week has come to an end and we must say goodbye to Paola and Raul and our cook, Lara, who has basically starved us to death all week (she will not be missed), and board the death bus back to Cusco. This time: at night during a rainstorm, so there are several added layers of danger.