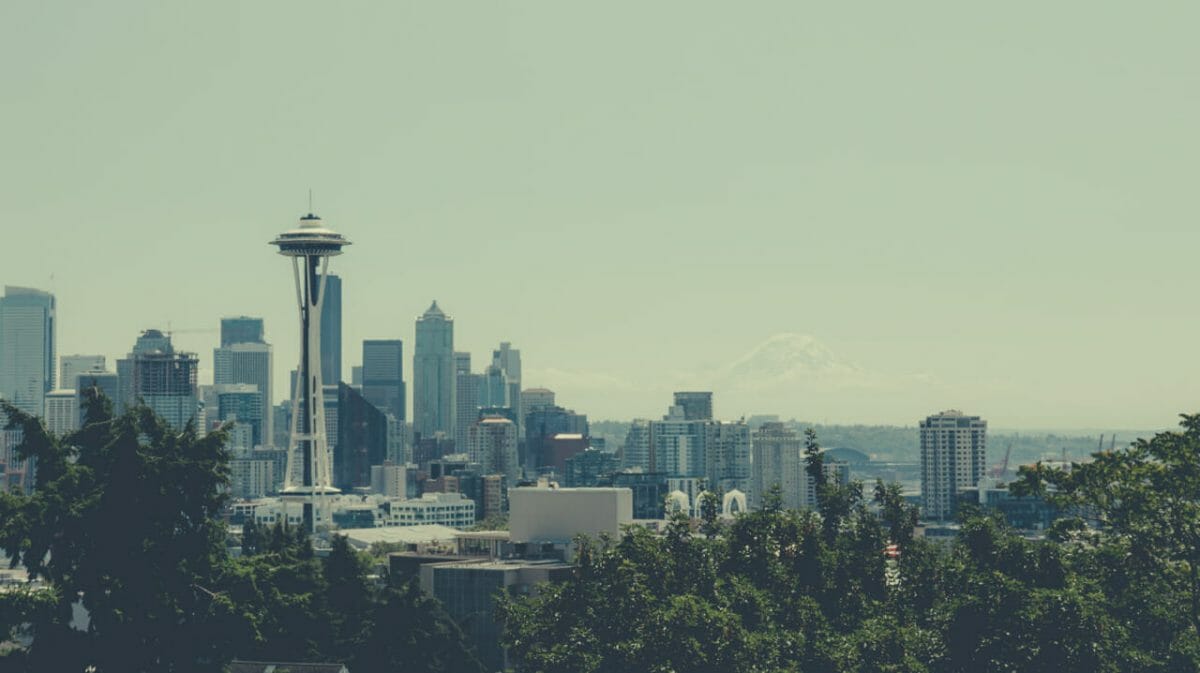 It’s been a year and a half since I moved from Seattle to Australia and this will be my first trip back to see family and friends, but also to show Aristo just a few of the beautiful places in my home state. Of course, we could happily spend weeks touring around and still not see all that Washington has to offer, but we made a good stab at seeing some of the city and some of the state’s most beautiful nature. Before we even had wheels down, we were pretty excited.

On the waterfront behind the Market, ride on Seattle’s Ferris Wheel for glimpses over the city and Puget Sound. The tickets are a little steep, but it’s usually not crowded in the daytime so you can enjoy an entire car to yourself and take in the beautiful views undisturbed.

See some of Seattle’s most famous attractions in a single stop: the famous food and flower market, Pike Place; the crazy fish throwing that takes place at one of the market’s oldest stalls; the gritty old wall covered in thousands of wads of brightly coloured chewing gum; and the first ever Starbucks. Beyond even the well-known sites, there’s still Beecher’s Cheese, which sells the best mac & cheese you’ve ever had in your life, the kitschy brass pig, the comedy club whose façade is home to much of the gum.. You could easily spend a day just enjoying the market and its immediate surrounds, which is exactly what we do.

My absolute favourite place in the city and former place of residence, Capitol Hill is a grungy and very artsy neighbourhood filled with hipsters and all kinds of crazy people who might not fit in anywhere else, but definitely find their place here. There’s prime people watching, shopping at some very peculiar shops, and some old Seattle favourites like Dick’s Drive In, for the cheapest but best burgers and fries and milkshakes, and Rancho Bravo Tacos, a somewhat sketchy looking taqueria that delivers cheap and fairly authentic Mexican. A new favourite for drinks: Rachel’s Ginger Beer, which serves up heaps of inventive flavours and fun cocktails.

For the best city views, I always recommend the Columbia Tower rather than the Space Needle (so you can get the Space Needle in your photos, of course), but the best views of Seattle at large are really from Kerry Park. You get the cityscape, the Needle, but also the stunning Mount Rainier, which is the city’s real highlight.

I also took Aristo to Snoqualmie Falls, which are quite near the suburb I grew up in and surprisingly impressive for just a local waterfall. Enjoy views over the Falls from a number of viewing platforms, or be a rebel and scramble over the banister and down onto the rocks (several dozen people will have already done it and it’s hard to watch them get close to the falls while you remain at a distance!)

Just one of the many beautiful areas of Washington state, Whidbey Island is situation in Puget Sound just NW of Seattle and offers some beautiful PNW-style beaches (i.e. rocky and freezing cold, but still surprisingly scenic). The drive from Seattle is a good portion of the fun and can easily be combined with a visit to the Olympic State Park. It may not be a tropical beach, but WA offers a lot of natural beauty in its own right.

Our final stop on our Seattle/WA hits tour is to Mount Rainier for a bit of hiking. The best way to get up close and personal with Seattle’s iconic mountain is to visit Sunrise Visitor Centre (rather than the more popular but crowded Paradise) and embark on a day hike for some truly unparalleled mountain views. It’s easy to see why people put up with all the rainy days..

Vanlife diaries #14: City of rocks, Craters of the Moon & The Sawtooths