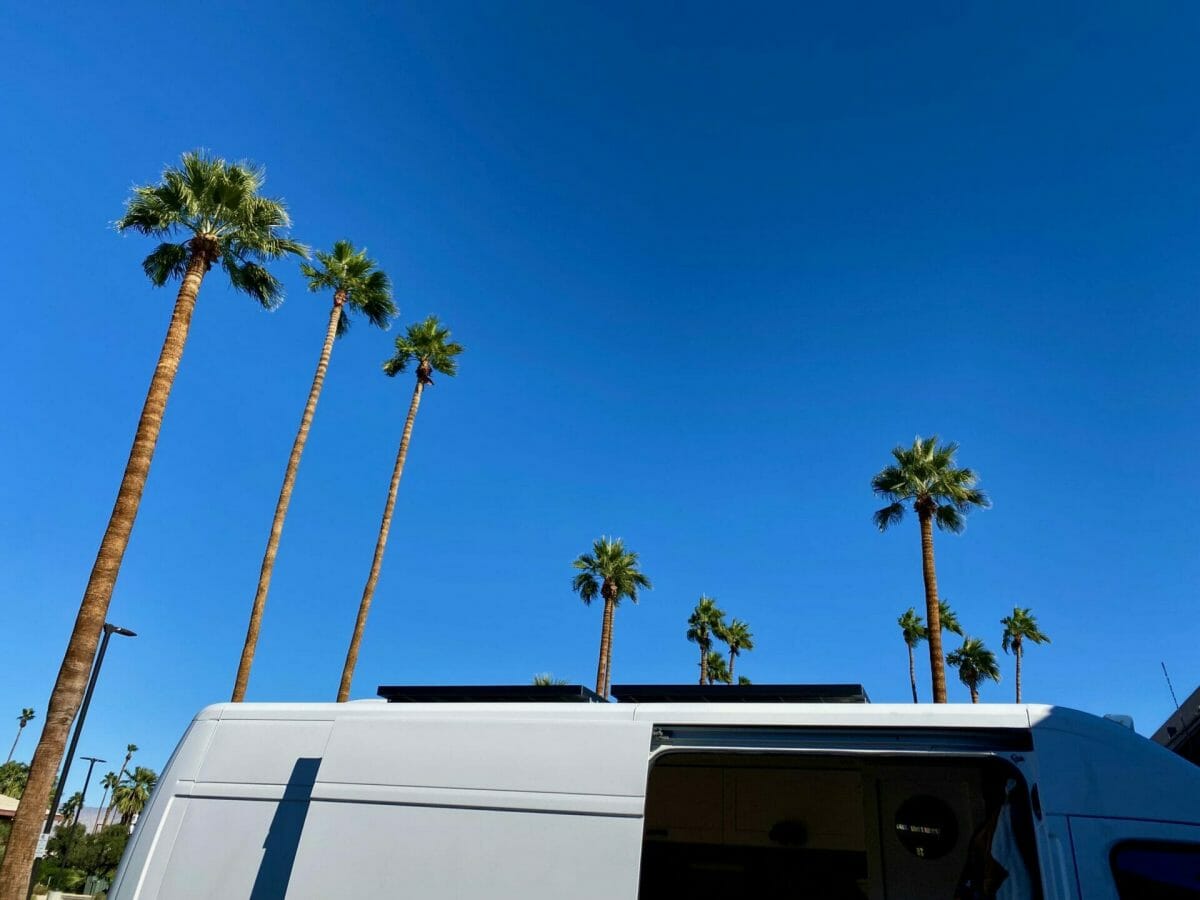 Vanlife diaries #37-38: preparing to cross the US-Mexico border to Baja in our van

As we near the end of the month and our border crossing into Baja California, Mexico, we’ve been busier than ever trying to finalise packing in the van, attend to some small but important maintenance, and organise paperwork for our travels through Mexico.

As excited as I am to finally transition to international vanlife, it honestly feels like we’ve been drowning in our ever-growing to do list.

Just in the last 2 weeks, we had to take the van to the dealership for an oil change, have our tires rotated at another location, our AC installed at a van shop, Dan replaced both the engine and cabin air filter, ordered various supplies and personal items online that came in 23 different packages to 9 different locations, made 8 calls to UPS and just as many to USPS, lost 3 parcels, returned another 15, built a DIY awning…

It’s been A LOT. And that’s to say nothing of the logistics that have been involved with actually getting our van (and ourselves) into Mexico!

Firstly and perhaps most importantly, I needed to organise our Mexican auto insurance, which is not only a legal requirement for driving a vehicle across the border— but also SUPER important when that vehicle is your home!

I wanted to make sure we had robust coverage that would protect against everything from collision and natural disaster to theft and vandalism, and after literal hours on the phone with several insurance companies and a mountain of research online, we found a policy with Baja Bound that would cover a DIY converted van like ours for the next several months in Mexico.

Read more: VANLIFE BAJA & MEXICO: HOW TO GET THE BEST MEXICAN AUTO INSURANCE FOR A CONVERTED VAN OR CAMPER

Still, that was far from the end of our logistics. It took me another several days to decide which border crossing made the most sense, as I’d have to specify this on some of our documents.

Mexicali East seemed a great option, since it would bring us down the Gulf side of Baja and avoid the tourist crowds around Tijuana. It would also allow us to spend our final days in the US stocking up in Palm Springs and boondocking near the Salton Sea, rather than cutting across to San Diego and dealing with urban camping (which doesn’t lend itself to very involved packing OR cleaning).

Although there is no visa required for US citizens to travel to Mexico, we need a tourist card (FMM), which functions essentially the same. I completed our paperwork online and paid the nominal fee, but once at the border, we will still need to visit one of the immigration offices to have that paperwork stamped and validated.

It also took me a ridiculous amount of time to get my phone switched onto an international Google Fi plan, namely because I had to change countries on my Apple account from Australia to America and that wasn’t possible without cancelling my Apple Music subscription, which also wasn’t possible because I’d already paid up to September of next year— this involved multiple calls to Apple and a lot of agony (losing my entire music library, for one), but once done, we were that much closer to being Mexico-ready.

We did enjoy a brief respite from the logistics for our anniversary date night (cotton candy burrito & a yard stick on the Vegas strip, followed by dinner at Shake Shack) and the absolutely inspired (if I do say so myself) thanksgiving bowl I prepared in the van— a base layer of french bread & parmesan stuffing; a sweet potato mash with brussel sprouts, onion, green beans, and fresh rosemary; topped with red wine gravy and cubed roast turkey.

Can you tell I’m pretty proud of this one? Just out here waiting for my Instant Pot sponsorship…

After a well-deserved break, the final hurdle was organising our Temporary Import Permit (TIP), which is required to drive any US-plated vehicle into mainland Mexico. Of course, there’s some strange regulation that vehicles must have GVWR of less than 3.5 tons (~ 7,700lbs) UNLESS they’re a motorhome.

This caused me a considerable amount of grief, since our van (and pretty much every van) is over that limit, yet not technically a motorhome— our van is actually registered as a commercial cargo van in the US. So how are all these vans getting across?!

Forum wisdom offered a wild mixture of perspectives and experiences, with some saying they’d successfully taken their van across without any mention of a weight restriction and others claiming they’d had to pay a bribe at the border to secure the permit. The only thing everyone seemed to agree on was that this rule was loosely and liberally enforced, almost a matter of luck.

At my behest, our very kind insurance agent (a Mexican native) called the permit office in Mexicali in an attempt to find more information, but she called back shortly thereafter to report that “this is so Mexico… the officers confirmed the regulation and won’t acknowledge any work-around, but I doubt it’s being enforced in actual practice”.

It was with some trepidation that I agreed it would be best to try and organise the permit directly at the border in Mexicali rather than online so I could explain in-person that we were a motorhome.

If this all sounds like a lot of rambling and a mountain of bureaucratic nonsense, it was.

But by the end of a long several weeks that were spent almost entirely with Mexico preparation, we were finally ready to make the crossing on 2 December, a sunny Thursday morning full of possibility.

The best spots to snorkel with turtles on Maui