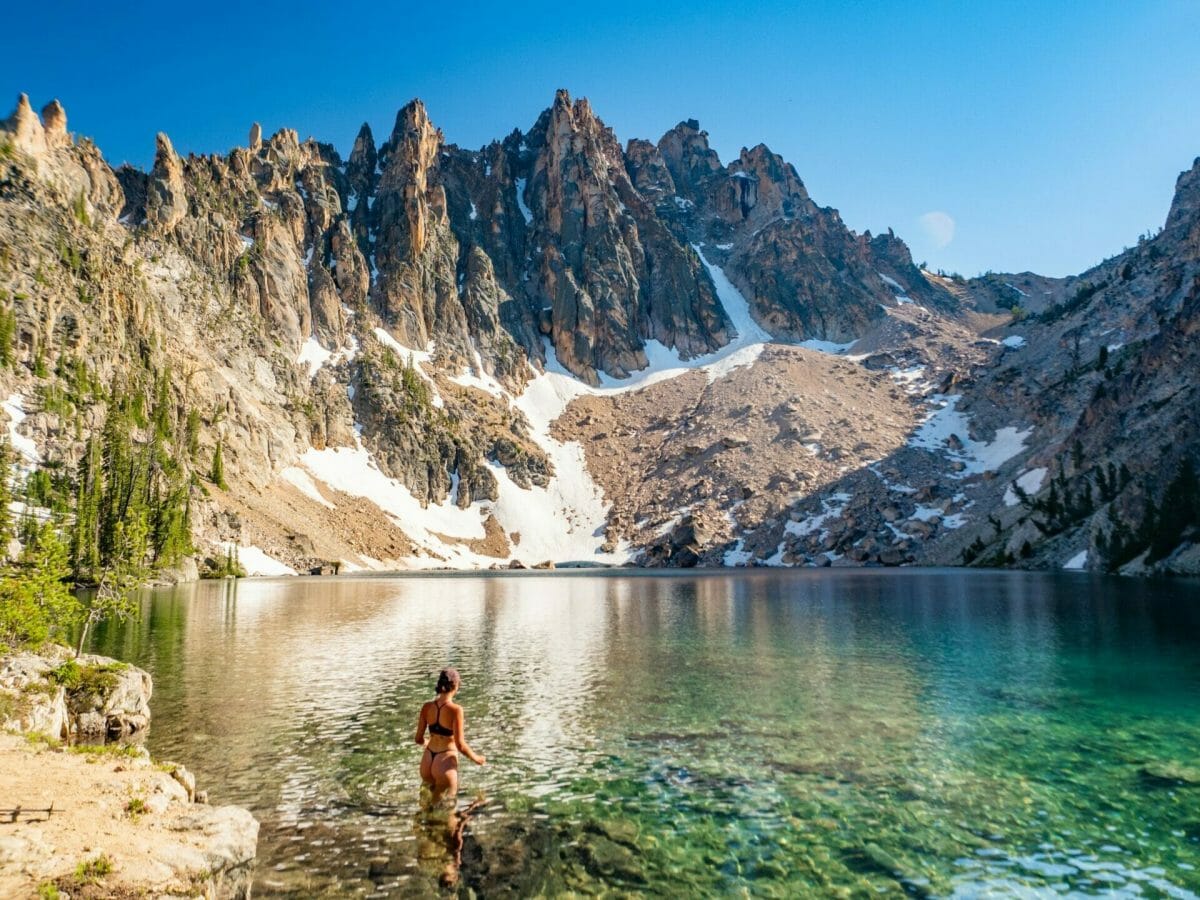 Idaho locals would have you believe there’s nothing particularly special about this landlocked western state (their licence plates say “Famous Potatoes”, need I go on)— turns out they were just trying to keep the gem state all to themselves this entire time. And honestly, who can blame them…

Idaho is SO insanely amazing, and a lot of that charm comes from being quiet, off-the-beaten-path & sort of secret. To be out in mountains like THESE, surrounded by natural hot springs, under the spray of waterfalls, camped along the river WITHOUT massive crowds?!

Totally enamoured with this part of Idaho and in no hurry to leave, we enjoyed another incredible week in the Sawtooths, making our way up several summits and exploring any trail that led to an alpine lake.

We started off the week by trekking out to the Bench Lakes, a string of 5 stunning alpine lakes in the heart of the Sawtooth Wilderness. Dan had previously made it to the 4th lake, but we were determined to go all the way under better conditions and with more time.

There’s a well-formed and easy to follow trail as far as the second lake, but beyond this, there’s only a vague hint of the path to the 5th— and as a result, very few hikers make it this far.

The route is incredibly steep, covered with downed trees, overgrown with bushes, and not even shown on the map, but our reward was utter solitude at the base of dramatic Mt Heyburn and a perfect aquamarine pool all to myself.

Like every lake we’ve visited in the Sawtooths, it was hard to pull ourselves away and return to the valley floor!

Our next adventure (one we’d had our sights on since arriving in the Sawtooths a couple weeks ago) was summiting the tallest peak in the range, Mt Thompson.

The approach begins on a relatively flat trail, transitions to a steep dirt track along the ridgeline above Redfish Lake, and finally veers directly up into the mountains on loose dirt and over inconvenient boulders to arrive at the lake at the base of Mt Thompson, a gorgeous unnamed body of water either referred to as 9000ft Lake or Lake 8865.

From here, it’s a wild scramble over scree and talus fields and up near-vertical snowfields to reach the saddle, where still more massive scree-covered slopes sent us sliding dangerously backwards with each step towards the summit.

With ominous weather brewing nearby, we hurried up the slope, struggling to find the best way (or really ANY way) before eventually connecting with the southwest coulouir, a Class 3 route we knew we could take to the summit, and topping out on the highest peak in the Sawtooths!

Sitting on the windy summit 4.5hrs later was such a happy accomplishment, and the view over one of my favourite ranges just couldn’t be beat.

Our retreat was long and, since we hadn’t even started our climb until 230pm, we returned along the final stretch of trail by headlamp to our van— but we couldn’t have been happier with our successful summit attempt.

Resting up after a demanding day of climbing to Thompson, we spent the following day relaxing in Cove Hot Springs just out of town and even treated ourselves to a burger at a local spot in Stanley.

Thursday was equally calm, opting for a short hike to Lady Face Falls so Dan could break in his new mountaineering boots and popping into town for the weekly “street dance”, a lively event with live music and outdoor drinks served between two of the only restaurants in Stanley.

It was particularly amazing to get back to camp with plenty of time to open our back doors and watch the sunset over the Sawtooths from bed, something we hadn’t been able to do for ages due to our late finishes on the trail!

By Friday, a huge number of out-of-towners descended on our otherwise quiet slice of mountain paradise and we were shocked by how many people we passed en route to Goat Lake.

The trail starts off incredibly flat and well-graded, then turns sharply up the mountain and climbs along a narrow dirt track, none of which is overly demanding until the final 20-30min of brutally steep scrambling on loose dirt and large boulders.

Plenty of hikers seems grossly unprepared for the journey and most just popped out for a quick photo of the lake before returning down, so we circled to the far side of the lake and easily found solitude even on this surprisingly busy day.

Our initial plan had been to attempt Williams Peak from the lake, but we decided instead that we’d head out the following day for a backpacking trip to try and escape the weekend chaos in Stanley.

This proved a wise idea, as a family with no fewer than 6 pickup trucks descended on our campsite at 1.30am that night and effectively squeezed us out of our own spot.

With no available campsites nearby, backpacking would have been the best option anyway, and thankfully we weren’t totally bushed by a 10hr climb (although we will certainly be back for Williams).

We set out on the ferry across Redfish Lake at midday and were on the trail to Baron Lakes by the early hour of 12.45pm.

It was a beautiful (if sweltering) afternoon hike up switchbacks that looked out over a massive cirque of mountains to finally reach Alpine Lake below Baron Divide.

Although the plan had been to camp at Baron Lakes, we found the perfect site along Alpine and opted to pitch here instead, spending the remaining hours of daylight skinny dipping in our private cove of the lake, drinking our one can of blueberry cider out of snow-filled cups, and whipping up a delicious backpacking feast.

If not for the swarm of thirsty mosquitoes, it would have been paradise, and even still, we could hardly complain with views like this.

On Sunday, we woke to the sound of chirping birds and set off at a leisurely pace up to Baron Divide and down to Baron Lakes for a swim. As per usual, there wasn’t a soul around and we had the spectacular scenery all to ourselves.

It wasn’t long after that we decided to extend our backpacking trip and venture out to Cramer Lakes, which meant packing up our camp at Alpine, returning to the trail junction about 1.5hrs below, and then forking to the left and ascending to another string of 3 beautiful lakes.

At the junction, we forded across a thigh-high creek and then zoomed up the much more mellow trail to Cramer Lakes, arriving a couple hours later just in time for a final afternoon swim.

We were both so awed by the waterfall gushing between the middle and upper lake that I even managed to persuade a reluctant Dan to jump into the chilly lake.

Dinnertime was more for the mosquitos than it was for us, but the scenery made up for the swarms of bugs that our “natural bug repellant” seemed to attract more than deter.

We enjoyed another leisurely morning, returning along the trail to Redfish Inlet in time to catch the 3pm ferry across to the lodge and back to our van. Naturally, we celebrated the end of a successful backpacking trip with a juicy burger and a large beer.

We managed to hold onto our beloved hilltop campsite throughout much of the week, but finally relinquished the prime spot to a friendly couple from Washington on Friday (this was prior to the 6 trucks that arrived at 130am) and shortly thereafter set out on a backpacking trip, well-timed to avoid the weekend rush.

Between all the hiking and backpacking (and even with our frequent burger-related treats), this was another cheap week for us at $247 total, setting us firmly back on track with our fluctuating budget.