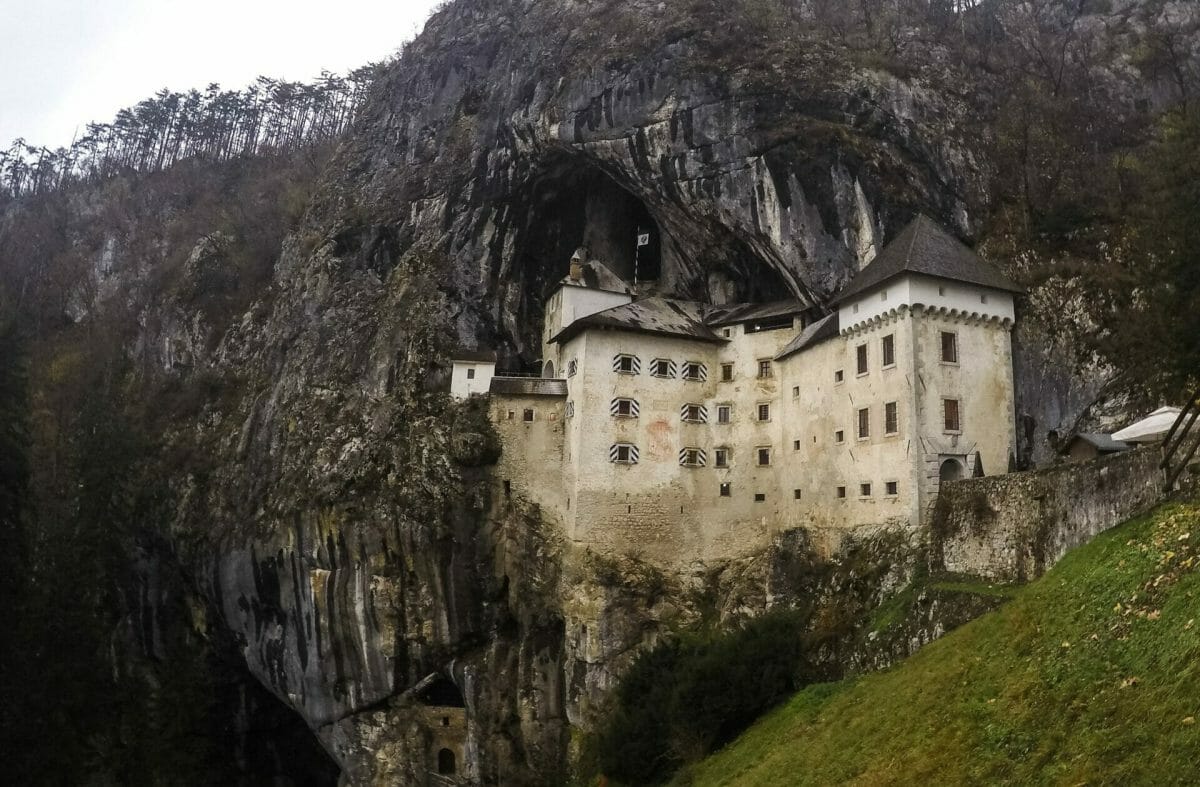 After a wonderful day biking around Lake Bled, we hoped to visit nearby Lake Bohinj today, but our Airbnb host recommended that we do something a bit different and visit a famous cave down near the coast. He organised a lift for us through a ride sharing website, so we are picked up from the park and driven 45 minutes to our first stop, Predjama Grad, a beautiful castle that holds the world record for the largest cave castle. Who knew there was even such a thing. We walk around outside the castle, but don’t have time to take the tour inside as we have to make the last tour of the day at the cave, Postojna Jama.

In the busiest two months of the year, a free shuttle runs between the castle and the cave, only 9km apart. But this is November, probably the least busy month of the year, so we have to call a taxi for transport between the two attractions and get miserably ripped off into paying 20€ for the 10 minute ride. Luckily, we do make it in time for the final tour of the day at the cave, and it is amazing. Not only is it one of the largest caves in the world, but there are calcium carbonate stalagmites rising up from the floor of the cave that date back over half a million years.

Let’s see what I can actually remember from our guide in terms of cave science.. Rain water is responsible for the formation of the stalactites (on the ceiling) and stalagmites (on the floor) of the cave. As rain drops very slowly drip through the ceiling of the cave, they erode the limestone and also deposit minerals, mainly calcium carbonate, but also iron oxide and magnesium, which accounts for the different colours in the cave. Stalactites metres long inside this cave have been slowly forming over thousands of years, only growing 1mm every 10-40 years, depending on rainfall. Some rooms within the cave have thin, spaghetti-like stalactites that form even more slowly as the result of incredibly small holes in the ceiling limiting the entrance of rain, only growing 1mm every 70 years. Yet another variety of cave architecture, “curtains” form on the curved sides of caves where raindrops roll down rather than dripping vertically.

Our tour lasts 90 minutes, with a 10 minute train ride through the cave at both the start and end, easily a highlight. We walk through heaps of rooms where mineral concentrations have made all the stalactites white or red, and cross a bridge within the cave that was laboriously built by Russian POWs during the war. Over 37 million people have visited the cave, making it the most visited cave in the world, and tours have been operating for hundreds of years, although the majority of the cave was only discovered in 1818 by a tour guide placing lanterns near an as-yet unexplored tunnel.

Finally, we get to hear about the rare sea salamander native to the caves, called an olm, proteus, or “human fish” because of its flesh colour. It is a blind amphibian with a lifespan of over a century that can go years without eating. Scientists have just witnessed, for the first time, eggs hatching and have the baby proteus in a special aquarium that we are able to see remotely via video feed. Half a dozen adult proteus are in a large tank in the cave, and they are interesting looking little things. I didn’t take a picture because of signage that warned lights may disrupt the life cycle of the animals, though that didn’t stop many people on our tour from taking flash photos or waving phone flashlights around the tank. Anyway, here’s a photo from the internet (source).

All in all, a great recommendation to visit the caves! Our student tickets (under 25s) cost about 19€ each and were well worth it, especially since we got to enjoy an English-speaking guide. We had to wait about 3 hours to catch a bus back to Ljubljana, though, and it was pouring down snow at that point. If we visit Slovenia again, I would hire a car and drive. It’s a small country, not more than 1 or 2 hours to any destination, but positively dismal public transport in the off tourist season.

Read more about our Slovenia adventures: