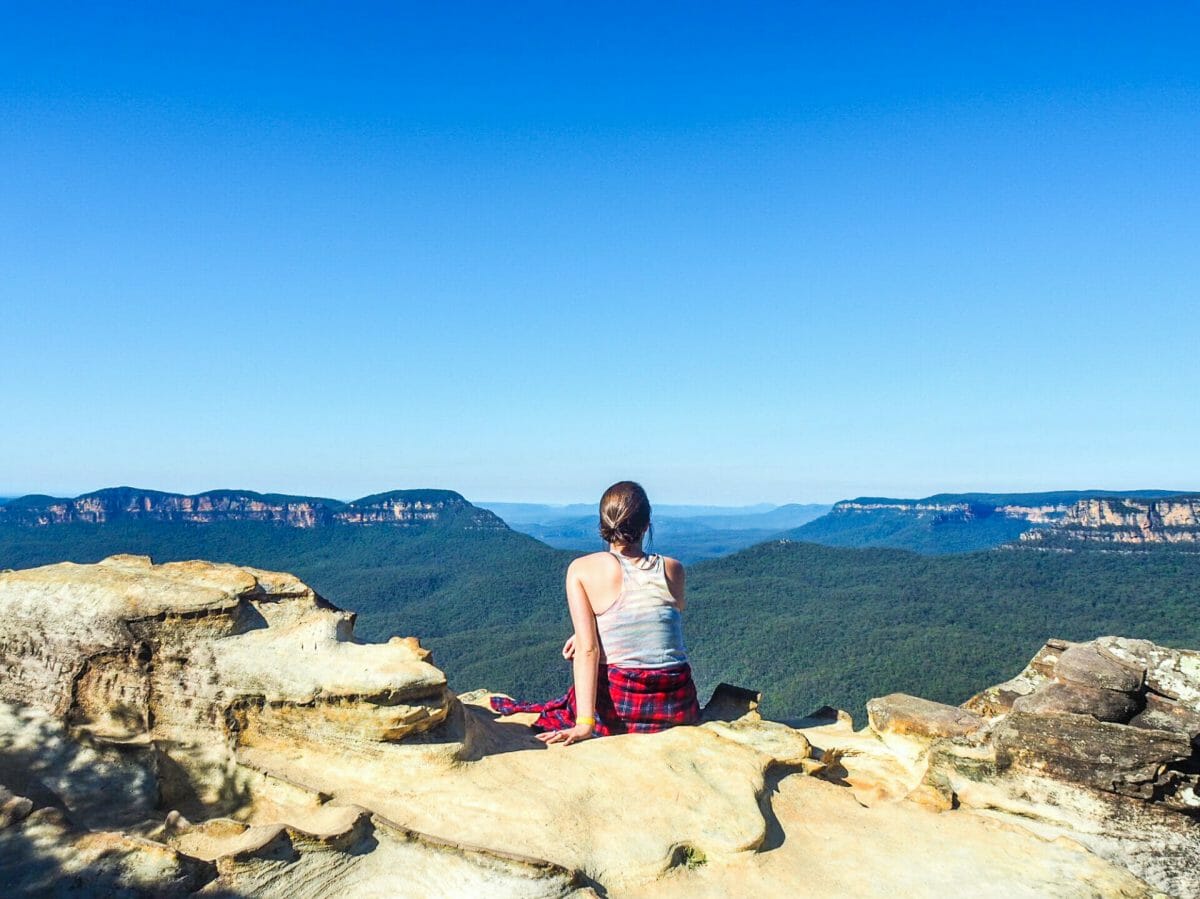 A pleasant stroll along the cliffs that includes nearly all of the Blue Mountain’s major tourist spots—Scenic World, Katoomba Falls, Echo Point & the Three Sisters, Leura Cascades, and Bridal Veil Falls—the Prince Henry Cliff Walk is inarguably one of the best day hikes this region has to offer in every regard. Not only is it very accessible and riddled with detours, side-trips, and stop-overs, it’s also chocked full of panoramic mountain views, rich foliage, and sparkling waterfalls. For an early morning walk along this legendary trail, my friend Lucy and I took to the track this weekend, enjoying perfect weather and an incredibly memorable hike.

There is a large (free) carpark at the start of the walk, the red hop-on/hop-off tourist bus drives straight to Scenic World, and there may also be some other local/tourist buses servicing the nearby area. Unless you’re continuing back on foot, the best way to get to your car after the walk would be via taxi (call 131008 to book).

Scenic World, the tourist epicentre of the Blue Mountains

2.5hrs, depending on how often you stop for photos at the seemingly endless lookouts

A rather easy trail with only a few sections of stairs

Most lookouts along the way are only a short walk to the road, spotty mobile reception, plenty of facilities at the major stops, including Scenic World, Echo Point Visitors Centre, Leura Falls, etc.

Food and drink available at Scenic World and Katoomba Falls Kiosk, plus a heap of restaurants/bars/cafes at Echo Point

7/10 for the amazing views and beautiful scenery, but rather poor signage during the second half of the trail and track closures that prevented us from walking the last kilometre

One of the biggest tourist draws in all of the Blue Mountains, possibly rivalled only by Echo Point and its view of the Three Sisters, Scenic World offers its own unique views of the area via a scenic cableway, forest floor walkway, railway down the cliff-side (the steepest in the world, actually), and “skyway” overlooking the valley. It’s been many years since I visited the park itself, but I do remember thoroughly enjoying myself, so I’d love to go back and re-explore on a future trip to the Blue Mountains.

From the entrance to Scenic World, there is a green sign pointing down a walkway for “Prince Henry Cliff Walk”. There is great signage along this first half of the trail, which guides you past a number of forks and towards Echo Point.

Skyway across the valley

As you walk away from Scenic World, you peek out a number of times through the trees to catch glimpses of the skyway and cableway firing up for the morning. The first proper lookout just another couple hundred metres on is over the Kedumba River, and also affords a great view back onto Katoomba Falls just to the right of the railway. After just a few more minutes of strolling through the lush foliage, the path passes right by the Katoomba Cascades which, although more of a trickle than a true cascade due to the sunny weather, are still superb.

Lucy walking through the forest

Our first glimpse of the Three Sisters

Continuing along the trail, Cliff View Lookout is a little platform off to the right, looking directly over Mount Solitary and much of the Kedumba Valley below. A few minutes more and another lookout, this time rather narrow and dominated by eucalyptus trees, splits off from the path offering more views over Mount Solitary and a rather impressive first glimpse of the Three Sisters in the distance. Better than these fenced lookouts, though, are a number of rocks to the side of the trail that also look out onto the mountains, offering a far less obstructed and chain-link-dominated view of the stunning scenery.

Three Sisters to the left & Mount Solitary to the right

Continuing through a particularly heavily-forested section of trail and across some charming stone steps, you pop out once again right next to a rock that’s perfect for its expansive valley views. Climbing a long line of wooden steps, the path then reaches Lady Darley Lookout, one of my definite favourite points along the entire walk. The lookout is up a set of metal steps, but possibly the best view is from the rock on the other side of the fence before you even climb upwards—you can tell I’m not the first to have that idea, as the chain-link fence has a human-sized hole torn in it.

Lucy looking out over the mountains

After only a few more minutes, the path rounds a corner to Echo Point Lookout, the ever-crowded viewpoint over the Three Sisters. Indigenous legend has it that three sisters, members of the Katoomba tribe living in the valley, fell in love with three brothers from a neighbouring tribe. As with all good love stories, though, this was a forbidden love, because marriage was not permitted between tribes. The brothers stole the sisters away in the night, igniting a war between the tribes, and a witchdoctor turned the girls to stone as a means of protecting them from the bloodshed. If not for his own bad luck in the battle, the spell could have been reversed and the girls would have emerged unharmed from the fighting, but instead they will stand forever as stone and look over their home.

Looking out over the three rock formations and the Jamison Valley, it’s easy to see why this is such a popular viewpoint. Squinting a little closer at the Three Sisters, you can even see a little path winding from the cliffs to the first Sister, which can be reached by continuing past the visitor centre and following signs for Honeymoon Bridge and Giants Stairway. After descending quite a few stairs, it’s possible to wander along this bridge yourself and stare up at the imposing Sisters in all their glory.

The descent to Honeymoon Bridge

The top of the first Sister

Walking back up several hundred steps (and pushing past what feels like several hundred people), a trail with even more steps leads back to the Cliff Walk and onwards towards Lady Carrington Lookout, a nameless lookout, and Fossil Rock.

Unlike the early sections of this hike that are meticulously signed at every fork, often including even distances and times, this latter portion is absolutely devoid of any helpful signage. In fact, there are a number of posts beside the trail that appear to have had the sign removed, so it can often be a little tricky to know that you’re on the right path. While I can’t confirm this for every single fork, it does appear that most of the paths converge eventually, though, so at least you’re never far from being on the right trail.

Continuing towards Leura Cascades, enjoy fleeting glimpses of Bridal Veil Falls, a stunning flow of water dropping quite a distance down one of the cliffs. Due to track closures, we have to divert up onto the road and back down via the Round Walk, which is how we end up missing the last kilometre of the Cliff Walk, but this trail does meander past the popular Leura Cascades, a small but crowded water feature nestled under the treetops, and make it all the way around to see Bridal Veil Falls from an entirely different angle, as well. From this lookout, seeing as it’s not possible to continue on the Cliff Walk, we hike back towards the Cascades and emerge from the trail onto the side of the road. It’s only a short walk down to the Leura Cascades carpark, from which it’s possible to call a taxi and cruise quickly back to the car (or bus) at Scenic World.

Lucy crossing the bridge to the Cascades

Bridal Veil Falls from above

There are hundreds of lookouts and dozens of falls in the sprawling Blue Mountains National Park, and it would likely take years to visit them all, but this comfortable and undemanding 6km walk takes in a fair few of the most spectacular and is probably one of the best hikes in the entire region in terms of scenery vs time/effort. In the more remote sections, you’ll find yourself the only one on the trail, but still try to tackle this walk in the morning to avoid the inevitable tourist pile-up around Scenic World, Echo Point, and Leura Cascades. All in all, I’d probably recommend this walk as the main activity for those short on time when visiting the Blue Mountains, as it really does offer a comprehensive exploration of this beautiful area.

Can’t get enough of the Blue Mountains? Check out these posts!

12 INCREDIBLE LOOKOUTS IN THE BLUE MOUNTAINS