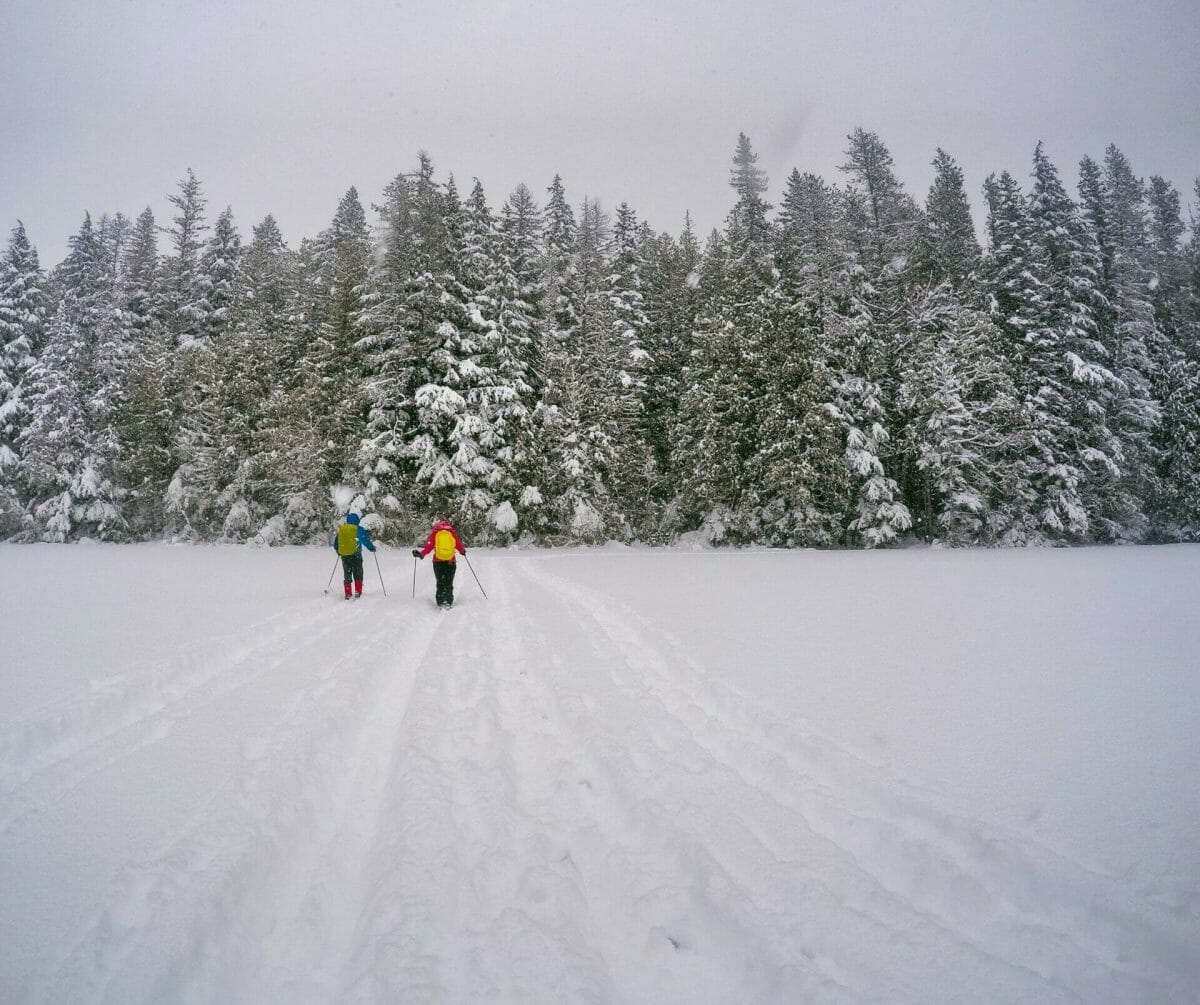 After 2 months of travelling through Europe, driving around Iceland, and catching up with some friends in Seattle, we are off on our last trip of the year to Montana. I’ve never been to Montana, which also means that I’ve never been anywhere as cold as Montana. People always say to me “Oh, you’re from Seattle, you must be used to the cold”. To which I raise my eyebrows and think of how to respond. So no, no I’m not used to the cold. I actually lose feeling in all 10 toes in anything less than 10C.

As a kid, my dad and I took train trips instead of the more typical Palm Springs-style family holiday, so I am super excited to be traveling to Montana on Amtrak. It may not be a 3-day trip like our jaunts to Chicago, Texas, LA, or NYC, but it promises to be scenic and out of the ordinary.

We get on the train in the evening, settle into our private cars, and have the attendant turn down the beds while we go to eat in the dining car. This is luxury travel at its finest. Cal and I are wondering why more people don’t use the trains in America until we wake up in the morning to disembark at 6am and realise that we haven’t moved since midnight, so we will be about 6hrs late to Whitefish. Oh, that’s why people prefer air travel.

Like all good Scandinavians, I was raised on exclusively cross country skis. Unfortunately, this also meant that I was the only person below the age of 50 enjoying the groomed cross country trails in Washington. I still have a great appreciation for Nordic skiing and take it upon myself to talk it up in young circles whenever possible, because it really is cool and gets a very boring rap that it truly doesn’t deserve.

Advocating for free-heeling aside, I missed out on those excellent years of childhood where you have no fear going down huge slopes and can fall over without hurting yourself very badly because you’re just so low to the ground to begin with. It’s really humbling to watch 5 year olds go down the mountain with more skill than you.

Seeing as it’s my second time on downhill skis ever, my family expects that I will be a master and starts me off on a really intense blue run, where I go careening off edges and threaten to take out anyone in my way while screaming “look out, I’m a beginner!”. I also have some epic (and I mean epic) wipeouts, like cartwheeling down the hill, accidentally getting turned around and going backwards at about 100mph, and sliding on my face for what feels like minutes. I sustain some sizeable injuries before we even take a lunch break. After some food, I manage to take a dozen successful green runs, even a few blue runs, before the family decides we should go all the way to the top of the mountain and ski down.

Well, I’m proud to say that I survived, but it was occasionally not a given that I would. What you can’t see in this photo is that I am genuinely fearful for my life.

As we are prepping to leave for the train back to Seattle, we think to check the train status online and notice that it is slightly delayed. No dramas, we will just hang out at the rental house a bit longer. Then it’s delayed some more, and some more, and finally the train isn’t moving at all towards us. By this time, it’s about 5 hours late and growing later by the second (due to the whole “not moving” thing). It’s also the middle of the night. We are starting to panic, since Callum is flying out that day, it’s a 15hr train ride to get home, and we are stuck in Montana.

We would fly Cal to Seattle, but we didn’t pack his passport. Who knew we’d need it! So we sit and wait for hours and hours in our house, and then eventually for hours and hours in the train station. By the time the train arrives, it’s 5am and nearly 9 hours late. We’ve pretty much given up on Cal making his flight out of SeaTac, but something stops me from paying to change his flight. Blind optimism, probably.

When we wake up (only a few hours after getting on the train), the conductor is announcing that we are all getting off the train in Spokane and being bused the remaining 5 hours to Seattle, “to save time”. Brilliantly, Eileen thinks to hire a car and we make a last-ditch effort to get Callum to Seattle. As we are taking a hurried bathroom break, we get news that the flight has been pushed back 2 hours and it’s all starting to look up for us. We transfer ourselves into mum’s car on the side of the highway in Issaquah and make up some extra time in the BMW (at the hands of a maniac driver). I am pleased to report that he did indeed make his flight and Montana was a monumental success, even considering my numerous war wounds.