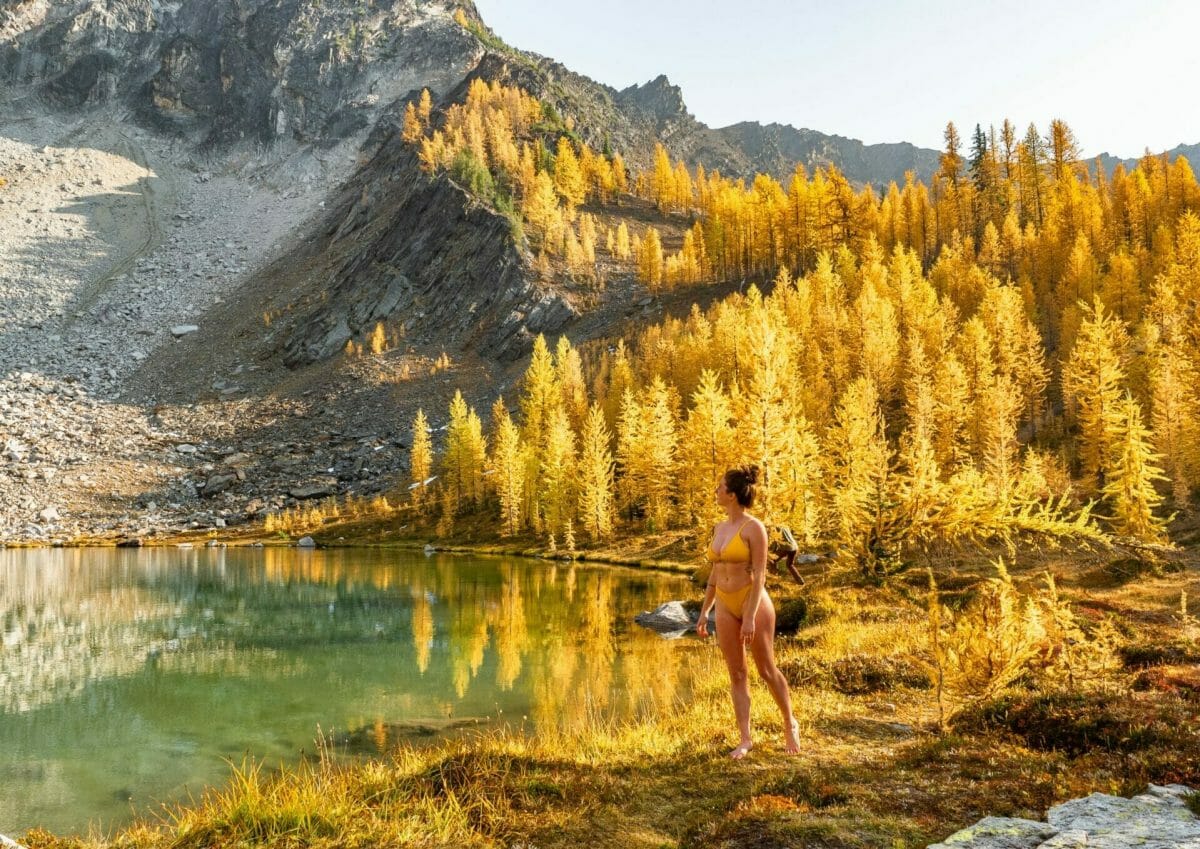 For only a few spectacular weeks every autumn, the otherwise unremarkable alpine larch trees in the Pacific Northwest turn a vibrant gold before dropping all of their needles for the winter. It’s the small geographical window, as well as the very narrow timeframe (and unpredictable weather this time of year), that makes golden larch season somewhat elusive and therefore incredibly captivating—if you know where to look and manage to time the season *just right*, it’s truly incredible to witness the deep green forests of the Cascades transition into an ethereal sea of gold.

Coupled with heather & huckleberry bushes that burn red in autumn and oak & maple leaves also in the midst of their fall change, there is no better time to be outside (particularly with a camera) than early October.

This week, I joined my dad’s annual Golden Larch Trip into the Lake Chelan-Sawtooth Mountains, a notoriously spectacular region for alpine larches. With nothing but blue skies and unseasonable sun the last 4 days, it was an unbelievable introduction to golden larch season that will certainly keep me coming back.

Highlights: Golden larches in their prime; summiting Star and Courtney Peaks; swimming in beautiful Star Lake on a hot afternoon; incredible sunset over the larches and red heather fields

After meeting up with a large group of dad’s hiking friends in the Lady of the Lake car park (Todd, Kevin, George & Karen, and Tony & Suzie), all 9 of us board the boat and set off towards Prince Creek. We are the only ones disembarking before Stehekin, so we have the trailhead entirely to ourselves when we touch back onto solid ground around 1030.

Soon, we are all off along the Lakeshore Trail, eventually connecting onto the Summit Trail that will lead us high over Lake Chelan through the Sawtooth Mountains. The day is sadly a bit smoky, with bushfire smoke from recent California fires blown in and obscuring what would otherwise be a sunny day, but all of our attention is focused on the climb anyway, so it’s not an enormous loss.

Over the course of the next 8hrs (including stops), we ascend a staggering 1,500m from the lakeshore into the mountains. The smoke seems to be holding some of the heat in, so it’s a surprisingly sweaty ordeal and I am all too keen to jump straight into a shaded pool as we cross a creek around lunchtime. It’s by far the coldest water I’ve swam in since I’ve been visiting WA, so I don’t last more than 10min, but I’m suitably refreshed (and shivering so badly that I’m borderline convulsing).

After lunch, we still have quite a few hours of uphill climbing to reach our destination. There are some challenges locating our planned campsite, but we do finally come across a little wooded area equipped with a basic open air shelter and, with great relief, drop packs for the night.

With the shelter as our group kitchen and pleasant tent sites among the trees, we wind down from a great first day on the trail and discuss what’s to come for day 2. (Photos of camp from dad’s blog).

The following morning, we roll out of camp just before 9am to continue the uphill climb. Thankfully, it’s relatively short-lived and we reach Star Pass within 2hrs, the final length of the morning’s ascent opening up into massive fields of golden larches.

Now around 2,200m, there are thousands of larches covering the hillside and dotting mountain slopes in the distance, their needles glowing a bright gold in the morning light. Particularly against the blue sky, cleared significantly from yesterday, the larches seem to burn across the landscape. This is what we came for!

At Star Pass, we stow our packs behind a bank of trees and, after a snack break, helmet up for the climb up Star Peak. Despite the massively unstable talus lining the base of the mountain, it’s not an overly challenging ascent and we reach the summit within 90min, spinning to admire hazy views of the peaks around us and Star Lake, tonight’s camp, just below.

My second major peak this week and my third major summit since I arrived in Washington 3 weeks ago, and it’s pretty sweet.

The descent from Star Peak proves more challenging, particularly with my geriatric knees and their worsening mobility, but finally we arrive back to our packs at Star Pass and gear up for a very short downhill into the basin.

By this time, the sun is blazing and the day is surprisingly hot, so all I can think about is Star Lake and a chilly mountain swim. With water on the mind, it’s an easy (albeit painful) descent to the lake through a forest of brilliantly golden larches, and before I know it I’m suited up and neck deep in the surprisingly fresh water.

I live for these alpine swims, the colder the better, so I am easily the last to emerge from the water (indeed, one of the only ones who actually go swimming at all) and take my sweet time pulling away from the shore.

Instead of camping directly at the lake, which would surely be more scenic, we walk just a couple minutes back through the red heather meadow to set up our tents out of Star Peak’s shadow, knowing that we’ll appreciate the early sun in the morning.

We take our time setting up camp, but soon a small group of us break off to ascend Courtney Peak, which looked like little more than a hill from Star but should offer fantastic views of the golden valley and back onto Star Peak that make the second ascent very worthwhile.

It’s a bit hard to leave the rest of the group behind in the sun drinking margaritas, especially to pant the entire way up to the summit, but we manage to ascend through sketchy trails and scramble across unsteady holders all the way to the summit in just 42min.

From the summit of Courtney, we really do have the most fantastic views of Star and the surrounding mountains. Star Peak may have been higher and required more scrambling, but this view is arguably more spectacular, so I’m quickly reassured that I made the right decision (even if I did miss out on afternoon margaritas).

The drop is unpleasant as usual, but thankfully it’s such a short distance to camp that we are soon seated in the heather with the rest of our group, sipping the remaining margaritas and shovelling in cheese dip. I’m certainly tired after a long couple of days on the trail, but I can’t wait to see what tomorrow has in store for us!