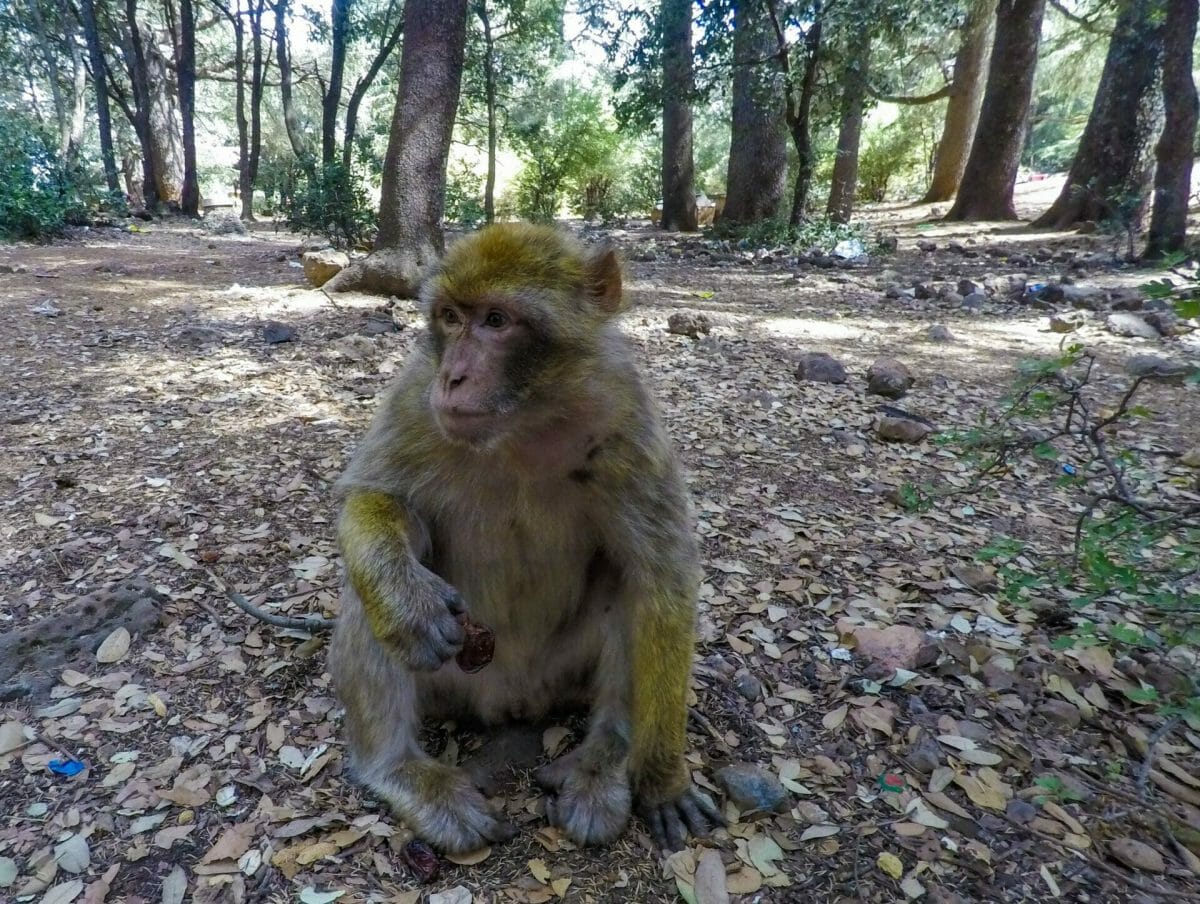 Monkeys & Dates: Merzouga to Fes through the Middle Atlas Mountains

Following an incredible 3 day tour from Marrakech to the Sahara Desert, my friend Katy and I find ourselves in Merzouga with no real plans for getting up to Fes, our next destination in Morocco. Luckily, it proves incredibly easy to organise transport and we soon find ourselves the only passengers in a 4×4, northbound for Fes. For 20€ a person, it feels almost too good to be true!

As with most things, it does turn out too good to be true when we stop an hour later to pick up the driver’s entire family and are now at full capacity in the car, thigh to thigh with only a thick layer of sweat between us. Thankfully, our driver, Ammar, more than makes up for it by stopping at numerous points of interest along the way and inundating us with a never-ending stream of Morocco facts. Some highlights from our drive include:

Leaving Merzouga and the Sahara Desert in our wake, our first stop is at a little lookout from which we can admire the Ziz Valley as we begin our climb up the Middle Atlas Mountains. Given that it’s summer, the Ziz River that normally rushes through the valley is more like a puddle, but a sprinkling of vegetation in between the hills still flourishes in its absence and the view is rather beautiful.

After stopping at the half-way point between Merzouga and Fes for a delicious lunch of chicken tajine and stocking up on fully-frozen bottles of water (that I honestly would have traded my left arm for, had it come down to it), Ammar makes a stop for us in the Cedar Forest. We know to expect monkeys, but we have no idea just how many furry friends there will be. We arrive to monkeys swinging from branches, monkeys hanging out in the sun, baby monkeys climbing over their mama monkeys, and I even come dangerously close to being peed on by a particularly cheeky monkey in a tree.

Ammar has come well prepared and gives us each a handful of dates and grapes to feed to the monkeys, who are not at all shy and happily grab fruit from us while scratching themselves lazily with their other hand. Clearly the monkeys are fairly used to people and see us more as a food source (or as something to pee on, as it may be) than a threat. The whole experience has me giggling with excitement.

Reaching the outer limits of Fes, Ammar takes us to a viewpoint to gaze out over the expansive city before we reach our final destination. It’s difficult to grasp the size of these cities when you’re wandering through the maze of narrow streets in the medina, but Fes has well over a million people and not a single high rise in sight, so it only makes sense that growth would be happening outwards. The result is sand and lime buildings as far as the eye can see.

Finally, after a full day of driving that was greatly elongated by our many stops (certainly not complaining), Ammar calls the riad we’ve booked in Fes and makes arrangements for them to meet us near the Blue Gate and walk with us to our room. Before we take our leave from Ammar, who will be in Fes for a few days with his family while his daughter tours the university (the world’s oldest university!), he tells us that Fes is also home to the world’s oldest medina, dating back to the 9th century. Living in Australia, it’s difficult to comprehend history beyond the 1800s, so I am suitably impressed by this information and look forward to exploring more of this storied city.

We profusely thank Ammar for a wonderful day and wander off through the winding streets with the man from our riad, who also proves unbelievably nice. After settling us in our room, he brings us delicious mint tea and even sends one of the other staff out with us to find food. After wandering starry-eyed around the bustling streets and just taking in the pleasant buzz of the medina, we settle, as suggested by Mohammed from the riad, on msemmen (magnificent crepe-type things filled with soft cheese) from a street vendor and are instantly obsessed with yet another Moroccan food.

Read more: THE ULTIMATE ITINERARY FOR 1-2 WEEKS IN MOROCCO

Once again, we’ve had a brilliant day in Morocco, almost entirely thanks to the kindness of the locals and their enduring determination to show off the best of their country to travellers. I can’t recommend Ammar highly enough as a driver― I’ve included a photo of his business card at the top of this post and I strongly suggest that you call him if ever you find yourself in Morocco and want to have the time of your life― and I also can’t say enough good things about the people at Riad Rocco. We’re only halfway through our time in Morocco and already I am dreading having to leave this incredible country.

Read more about our travels through Morocco:

MARRAKECH, MOROCCO: HOW TO GET INCREDIBLY LOST IN A SOUK AND SPEND ALL YOUR MONEY ON SCARVES

A GUIDE TO BOOKING THE BEST SAHARA DESERT TOUR

THE MOST PHOTO-WORTHY SPOTS IN CHEFCHAOUEN, MOROCCO’S BLUE CITY

A VERY SWEATY HIKE TO AKCHOUR WATERFALL AND GOD’S BRIDGE

ON THE BEACH IN OUED LAOU

THE ULTIMATE ITINERARY FOR 1-2 WEEKS IN MOROCCO

Photo journal: view from the top of Table Mountain

Quadbiking through the dunes in Namibia

8 most amazing places to visit in Namibia