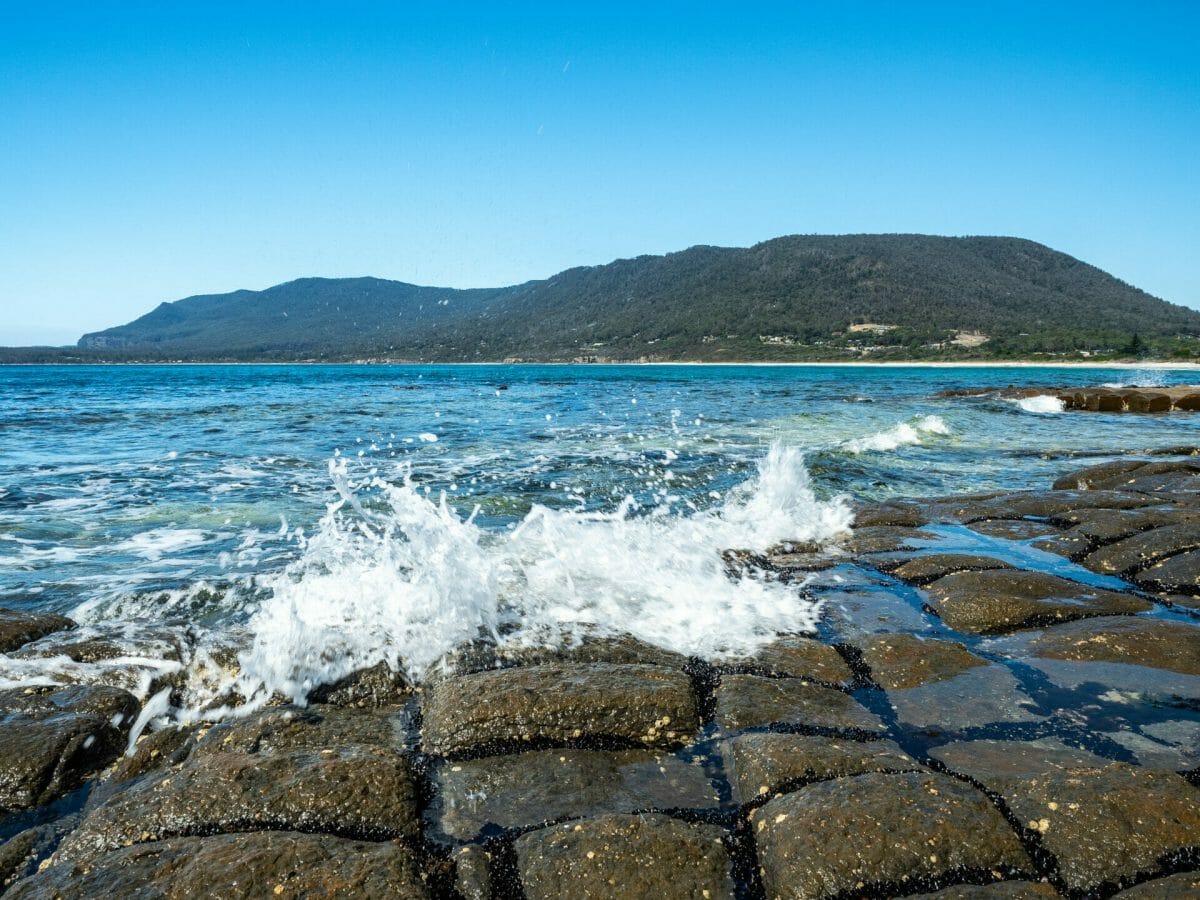 Easily enjoyed as a day trip from Hobart or a series of interesting stops on the way to Port Arthur Historic Site, the Tasman Peninsula is one of the state’s most beautiful and diverse areas, offering an endless supply of coastal lookouts and frequent opportunities to discover fascinating geological phenomena that exist in few other places on earth. We recently drove through Eaglehawk Neck on our way to hike the Three Capes Track and were totally blown away by the number of scenic stops right off the main highway, easily accessible from large car parks within a matter of minutes.

More than just a pretty picture, though, all of the attractions on this 120km drive showcase unique coastal erosion patterns and highlight the role of sea and wind in the gradual sculpting of our environment, proving once and for all that geology really does, as they say, ROCK. From the Tessellated Pavement to Remarkable Cave, this guide (with added commentary from my geologist father) will hopefully inspire you to discover the Tasman Peninsula on your own Tassie road trip!

After driving approximately one hour from Hobart along Arthur Highway, the first stop as you cruise through Eaglehawk Neck is a beautiful viewpoint overlooking Tasman Bay just off the main road onto Pirates Bay Drive. Admire the coastal views through the vintage telescope angled over the water or grab a hot drink at the little Cubed Espresso Bar and enjoy the surroundings from one of the many sunny tables. This is just a tiny taste of what’s to come!

Dad inspecting the geology of the Tessellated Pavement

Only about 3km down the road, stop at Eaglehawk Neck’s principle attraction, the Tessellated Pavement. And just as promised, we were all baffled by the fascinating salt-carved rock slabs here, spending ages just wandering along the various “pans” and “loafs” to inspect the geometric patterns that have been slowly eroded into the rock over the last 160 million years. Indeed, the formation of this unique landscape is just about as interesting as the scenery itself.

According to my friendly local geologist (aka dad), the Tessellated Pavement humbly began as a horizontal layer of silt about 300 million years ago after a slight depression in the earth’s surface caused sediment to settle here and gradually cement together. As the siltstone layer dried out and hardened over the next 100-200 million years, it developed a geometric pattern of shrinkage cracks related to stresses in the earth’s crust (you can see a good example of this in the first photo below). The cracks closest to the shoreline were subjected to back-and-forth wave action, which widened and deepened the cracks, leaving the adjacent siltstone to form convex “loaves” (as in the third photo below or the title photo of this post). The cracks farther from the shoreline were filled with sand but were not subjected to back-and-forth wave action; instead, the seawater tended to sit on top of the siltstone and chemically weaken the rock, thereby forming concave “pans” between the cracks (as in the big photo of dad above or the second photo below). In short, the “loaves” are the result of physical erosion, whereas the “pans” are the result of chemical erosion. And both create some pretty spectacular visuals!

A perfect example of a “pan”

“Loaf” features of the Tessellated Pavement

Continuing another few minutes to the south end of Pirates Bay, the next stop is the Blowhole, a very aptly-named rock cave that blows seawater high into the air as each set of waves pumps through its narrow opening. During our visit, the tide was at its lowest point, but we still managed to catch several impressive eruptions of saltwater— I can only imagine the spectacle in high tide or turbulent seas. From the carpark, there is also a small (~5min) trail, the Blowhole Circuit, that brings you to the wonderful Fossil Bay Lookout. Here, you can see the rather dramatic effects of erosion on the sedimentary cliffs, which have calved enormous hunks of rock into the water after intense encouragement from the powerful and unrelenting waves.

Sunny day at the Blowhole

Just 2km around the other side of the point, you can park your car at either Devil’s Kitchen or Tasman’s Arch carpark to explore both sites, as well as the lookout along Tasman’s Arch Track. Much like the Blowhole, Devil’s Kitchen was once a sea cave, gradually eroded by pumping waves to form the prominent chasm that we can now vaguely make out from the viewing platform. Essentially, the cliff’s horizontal siltstone was undercut and finely chiseled by the ocean to form the beginnings of a sea cave, which was then slowly expanded over thousands of years as water pressure between the cracks dramatically forced rocks apart. Devil’s Kitchen continues to grow in size and a new little cave has even formed on the opposite wall, so it will be any wonder what this landscape looks like in another hundred years.

If you’ve already parked at Devil’s Kitchen carpark, you can access Tasman’s Arch in a quick 5min via the Tasman’s Arch Track. It’s really interesting to view this beautifully carved rock arch after visiting Devil’s Kitchen, as the two are geologically similar but still look strikingly different. In terms of erosion, Tasman’s Arch is actually many thousands of years behind Devil’s Kitchen, despite the fact that the Arch sits so much higher above sea level due to a roof collapse. After ogling the arch from several different vantage points, head back along Tasman’s Arch Track and detour towards the lookout for more spectacular views before continuing the drive south.

The lookout near Devil’s Kitchen and Tasman’s Arch