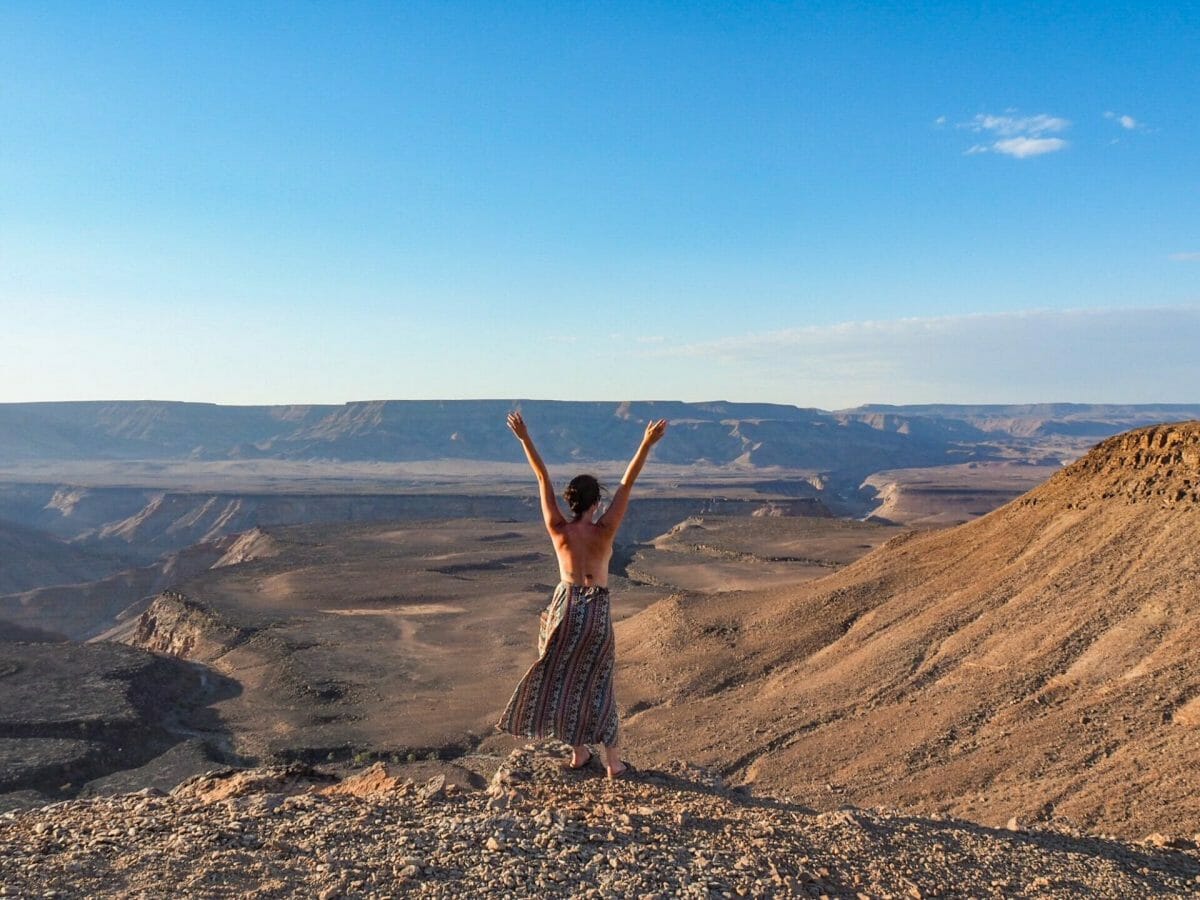 Southern Namibia’s awe-inspiring Fish River Canyon, despite being the second largest canyon in the world, flies just about as far under the radar as the rest of this alarmingly underrated country. At 160km long, 28km wide, and just 550m deep, it is still a far cry from Arizona’s Grand Canyon in terms of sheer volume, but its lack of commercialisation and tourist crowds really place it a step above— while both canyons are inarguably stunning, you won’t find yourself enjoying the sunset alone or exploring the canyon in complete solitude at both. Legs dandling over the rocky rim and staring into the winding Fish River below, it is truly difficult to imagine why people aren’t coming in droves to experience this natural wonder, but it’s pretty spectacular for those who do come that it’s still largely untouched. Point being: get to Namibia ASAP, before the rest of the world finds out about it.

All the details: Fish River Canyon

Cost: Entry into the park is N$80 per person plus N$10 per vehicle, payable in Hobas.

Getting there: Hobas is a 6 hour drive south of Windhoek, or the nearest airport is located about 90 minutes away in Karasburg. After entering the park, continue on another few minutes to reach the first viewpoint.

Where to stay: Camp at the very funky Cañon Roadhouse, just 15 minutes down the road from Fish River Canyon. Sites are N$195 per person, but there are also rooms available for $1355 and up.

Top tip: Make it to the canyon in time to enjoy at least an hour of light before the sun begins to set, that way you get beautiful views into the canyon and the amazingly colourful sunset.

After breakfast and packing up as usual, we hit the road this morning for what will be a relatively long day of driving to reach our next camp near Fish River Canyon, the world’s second largest canyon. (Interestingly enough, I saw the world’s third largest— Blyde River Canyon— last month in South Africa, and I had never heard of either of these canyons before researching and planning this trip.) As we travel farther south through Namibia, away from the Namib Desert and towards the border with South Africa, the weather should, in theory, start cooling off, although this remains to be seen. By 10am, I’m sweating in my seat as usual and we still have quite a few hours to go. The only good news is that I now have heaps of time to catch up on my photo editing, which is backing up miserably as I spend more and more time in the pool at camp (out of physical necessity).

We have a mid-morning shop stop, where I pick up on a few snacks to carry me through the rest of the trip, and then we are back in the truck until lunchtime. Some of us play a couple rounds of Mafia and Pictionary, but eventually everyone just gets too hot and retires back to their seats to suffer alone. Even though my elderly MacBook is the temperature equivalent of Venus and it physically hurts to hold it on my lap, I work on my blog and listen to music until we arrive at our camp, trying to distract myself from the fact that I am near boiling alive.

Anticipating our needs in the best possible way, Rachel drops us directly in front of the pool and goes off to sort out our check in. Clothes and all, I hop immediately in and then just enjoy the shade, the first shade we’ve had all day. I even get the opportunity to kill Grace (in reference to an ongoing game of camp Clue, not actual murder) at the pool, so it’s shaping up to be a lovely afternoon. (Actually, my murder wasn’t quite as successful as I hoped, since it turned out that Grace had me as her target and now the only way for me to advance in the game is to kill myself. At least now that the game is over, people will stop getting jumpy when I ask them to take a photo for me or put sunscreen on my back..)

After plenty of swimming, a few sandstorms, and a refreshing G&T or two at the bar, we walk back to the truck and drive a short distance to reach Fish River Canyon. It’s still painfully hot, but the canyon proves an excellent distraction as I run around in excitement trying to capture every angle. After the requisite landscape shots, we make a second attempt at our girls photo and then play photographer, posing each other in front of the canyon and snapping long streams of photos. Sometimes it is so nice to be surrounded by females.

Several thousand pictures later, those of us who have lingered the longest at the first viewpoint start the walk over to the lookout from which we will watch the sunset. Naturally, for me at least, the walk involves a number of stops as more and more of the canyon is revealed around bends. More than 500m down, I can even make out the (rather low) Fish River carving its snaking path through the rocks. At one particularly beautiful outcrop, I make Nicole take several dozen photos of me sitting precariously on a rock over the Canyon, capitalising on the fact that Cal isn’t here to get mad at me for climbing out onto dangerous ledges. The feeling of dangling your legs over the world’s second largest canyon as the wind rushes past and the sun sets is worth the journey out onto the ledge. Plus, the photos aren’t bad..

Rachel and Sam have driven the truck around to the viewpoint to meet us and prepared dinner by the time Nicole and I, the last ones back, arrive, so we dish up heaping plates of spagbol, fill our mugs with grape Fanta, and watch the sun descend over the majestic Fish River Canyon as a group. It truly is a stunning natural wonder, and one that I’m not sure many people know about— we don’t see a single other person the entire 2 hours we are at the canyon, which is pretty unheard of at other (even less impressive) sites around the world. Just one of the many reasons that Namibia is quickly rising to the top of my list.

Read more about our travels through Namibia

SLEEPING UNDER THE STARS IN SPITZKOPPE, NAMIBIA

WHERE THE DUNES MEET THE SEA: SKYDIVING IN SWAKOPMUND

QUADBIKING THROUGH THE DUNES IN NAMIBIA

8 MOST AMAZING PLACES TO VISIT IN NAMIBIA

Read my article about Namibia on We Are Travel Girls

10 REASONS NAMIBIA SHOULD BE AT THE TOP OF YOUR BUCKETLIST

Crossing the Tropic of Capricorn

A guide to planning the best South African safari