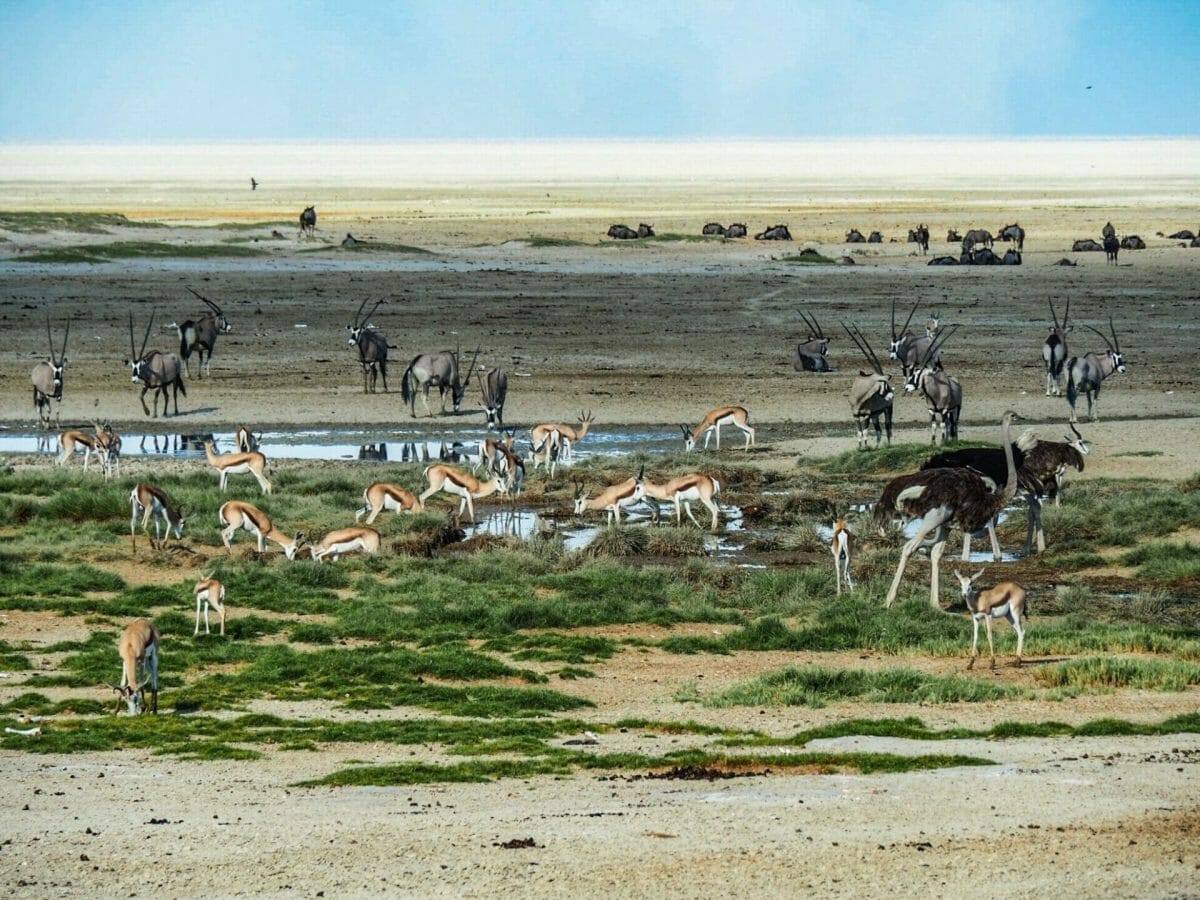 Etosha National Park, whose name literally means “Great White Place” in reference to the enormous and blindingly white salt pan in the centre of the park, is one of Namibia’s (many) treasures. Hundreds of animal species roam around the 20,000 square kilometre conservancy and visit the watering holes at night, most notably the near-extinct black rhino. It’s incredibly rare to see these African giants in other national parks around southern Africa, but Namibia is actually home to the world’s largest population of black rhino, the majority of whom live in Etosha. There’s something a bit magical about watching the sunset over the watering hole as a whole family of rhino come for a drink, just moments after half a dozen elephants have been splashing about. But I guess that’s just Namibia: magical.

Cost: An entrance fee of N$80 per person and N$10 per vehicle per day is payable at any of the four entrance gates: Anderson’s Gate (near Okaukuejo), Von Lindequist Gate (near Namutoni Camp), Galton Gate, and King Nehale Lya Mpingana Gate. It is also possible to join guided game drives through one of the camps for around N$600.

Getting there: The nearest airport is Ondangwa Airport (2hrs from Etosha), but it’s also possible to fly into the larger Hosea Kutako International Airport in Windhoek (4hrs from Etosha). Once at the park, drive from one of Etosha’s 6 internal camps to the nearest gate for entry beginning at sunrise, and then enjoy a self-drive safari through one of Southern Africa’s most diverse national parks.

Where to stay: Namutoni, Halali, Okaukuejo, and Olifanstrus all offer camping facilities, while all 6 camps offer chalets (Dolomite and Okonshi being the most luxurious). Camping at Okaukuejo is N$250 per site (8 people max) plus N$136 per person and the amazing chalets overlooking the waterhole range from $N2000-3500 per person sharing.

Top tip: Hang out at the waterhole after dark to see families of elephants and rare black rhinos come for their nightly drink/mating ritual.

After a very short and uncomfortable sleep (following a rather late night of dancing at Chopsie’s in Windhoek), we eat a quick breakfast, pack up our tents (or rather my tent is packed for me as part of the bet I won yesterday at the Namibian border crossing), and hit the road for another long day of driving. Now in central Namibia, we must travel several hundred kilometres northeast to reach Etosha National Park where we will spend the next couple of days on safari. I’ve heard a number of glowing reviews of Etosha from other travellers, so I am eager for the opportunity to spot more animals, but I must admit that I am not looking forward to travelling north where it is likely to be even hotter. As it is, the heat is near unbearable..

For the majority of the 6 hour drive to the park gates, every single person on the truck is passed out, rotating through a series of sleeping positions that increase in apparent discomfort. Around 3pm, we pull through the gates of Etosha National Park and everyone comes groggily alive to start watching for animals. I routinely nod off in between sightings, though, only waking up to excited shrieking in time to stick my camera out the window and take photos of elephants, giraffe, zebra, springbok, or some strange bird. The high point is when we see a lioness, lazily walking through the heat as a large group of springbok look nervously on, but I will admit that I’m relieved to finally arrive at camp, get out of this boiling truck, and start cooling off. It was 45C this afternoon and I swear I nearly died.

After setting up the tent and organising our things a bit, I chop carrots as part of cooking duty and then run off to the watering hole to meet up with the rest of the group. I’m devastated to have missed the sunset by only a few minutes, but the sky is still lit up in blues and yellows that provide a great backdrop to the elephants drinking water, so I’m still pretty excited. This is easily the best camp we’ve yet stayed at and we’ll be here for two nights to enjoy the busy watering hole. I would have said that Elephant Sands in Botswana was impossible to beat, but the size of this watering hole draws in elephants, rhino, giraffe, zebra, and springbok, sometimes all at once, and I’m already wishing we could just spend all day sitting here while animals come for water. Around 830pm, we all head back for another of Rachel’s delicious meals and then I shower and pass out in my tent (mistakenly, it turns out, since a family of rhinos visit the watering hole after dark and I miss the whole thing).

The next morning, we wake up around 530am to catch the sunrise and get a good start on the day for our full day game drive. Thankfully, I can already tell that today won’t be quite as unbearable as yesterday, so I’m in a good mood for animal spotting and manage to stay awake most of the day. We spend about 5 hours driving through the park, stopping for animals and visiting the massive salt pan that gives the park its name (Etosha means “great white place”) before stopping at another camp for lunch and several hours of relaxation time at the pool. It’s by far the nicest pool we’ve seen on our travels thus far, so everyone is excited to get in and play a variety of games. Some of the group peels off during the last hour to go see the watering hole, but Cal and I convince ourselves that it’s too hot for animals to be out anyway and spend our remaining time in the pool and eating ice cream, which turns out to be a great choice.

Back on the truck around 330pm, the heat is starting to get a bit uncomfortable again and I fall asleep to avoid suffering, waking up a little while later to the unmistakable smell of rain. Within minutes, rain is pelting down, blowing straight into the truck windows and drenching everything, but it’s the most excited I’ve ever been to see rain. With the downpour comes a dramatic drop in temperature and a great improvement in energy levels within the truck— Kerri gets out her speaker and we all scream along to Toto’s Africa, followed by songs from The Lion King in German courtesy of Melina and Emelie.

By the time we roll back into camp, it’s really just sprinkling, so I whip up the cheese dip I’ve been saving, stock up on cold Fanta from the shop, and trot off to the watering hole with the group where we spend the remaining time before dinner watching a large herd of elephants. It seems very likely that we will get to watch two of the elephants (at times it is unclear which two) mating and we all narrate the painfully obvious love triangle with excitement, but unfortunately the female elephant is just not that into it and the herd eventually moves away.

After dinner, we return to the watering hole to find a number of black rhino taking a drink and having a splash in the dark. Over the next hour, they move so close to the perimeter that I can stare into their little black eyes and we quite nearly get to see mating again, so I am dying that I left my camera in the now-locked truck. It’s quite late when Cal and I eventually peel away from the watering hole and go to bed in our tent. Just before falling asleep, I swear I hear lions (later confirmed by several others who also heard them, although no one saw them), but I am way too tired to get back up. Even without a lion sighting, though, it’s been a wonderful day on safari, with many of the highlights happening right at our own camp.

Read more about our travels through Namibia

SLEEPING UNDER THE STARS IN SPITZKOPPE, NAMIBIA

WHERE THE DUNES MEET THE SEA: SKYDIVING IN SWAKOPMUND

QUADBIKING THROUGH THE DUNES IN NAMIBIA

8 MOST AMAZING PLACES TO VISIT IN NAMIBIA

Read my article about Namibia on We Are Travel Girls

10 REASONS NAMIBIA SHOULD BE AT THE TOP OF YOUR BUCKETLIST

A guide to overlanding in Southern Africa, Part I: What to expect