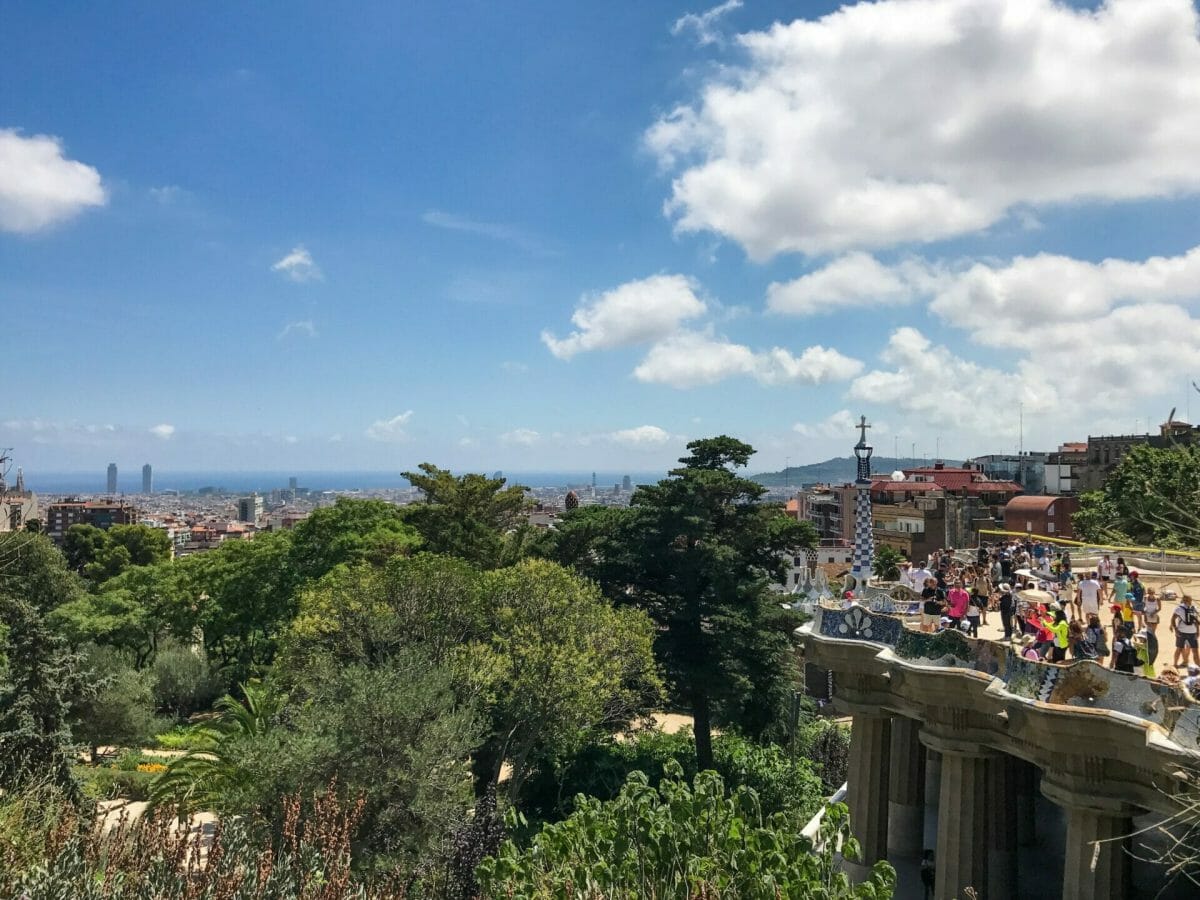 Spain’s Catalonian capital is a bustling Mediterranean metropolis, with wide, leafy lanes prime for people-watching, sandy shores that are almost eternally sunny, and a fútbol following bordering on religious. It’s immediately plain to see why so many of my friends have raved about this city— I am completely bewitched by the people, the heat, the peculiar architecture, and the lively noise in every corner of Barcelona. And the readily flowing sangria certainly doesn’t hurt, either! Here’s everything you need to know for your own visit to Barcelona, including how to get there, where to stay, and what to do.

Fly into the Josep Tarradellas Barcelona-El Prat International Airport, from which you have a number of options for reaching the city. A quick and comfortable (yet still cost effective) mode of transport is the Aerobus— these buses stop outside T1 and T2, and will get you into the city in about 30 minutes for just 5.90€. You’ll either need to walk to your accomodation or get on the metro afterwards, though, as there aren’t heaps of stops.

Alternatively, you can take the metro or a train into the city using the Hola BCN public transport card (15.20€ for 48hrs of unlimited use). This can sometimes take a bit longer depending on exactly where your hotel is, but it’s a great way to get familiar with Barcelona’s public transport and get your money’s worth out of a pass.

Although parts of Barcelona are great for walking, you’ll probably end up on public transport at some point due to the urban sprawl. Thankfully, public buses and metro are incredibly safe and easy to use. When in doubt, just ask your hotel staff to direct you towards the correct bus or metro stop for your journey, and pay using your Hola BCN public transport card (15.20€ for 48hrs of unlimited use, or check out other options on their website).

Where to stay in Barcelona

We stayed at Factory Gardens Hostel (now called The Loft Hostel), which is a fantastic, centrally-located hostel with dorm beds for about 25€ per night. I loved the lockers for our bags, the lights and charger next to each bed, and the curtains that that helped to create some privacy at night. Overall, I’d highly recommend this clean, comfortable, and inexpensive hostel— save your money for tapas!

What to do in Barcelona

I’m totally obsessed with markets— in my opinion, there is no better introduction to a city than being thrown into the sounds and smells of its markets, and La Boqueria is no excpetion. Near the Liceu metro station, we visited this hectic and spectacular mercado where you can buy all sorts of fruits, meats, and spices (it was pretty difficult for me not to bring home mango-infused sea salt, but it would have been snatched immediately off me by Australian customs, so I resisted). As a consolation prize, I enjoyed a delicious fruit juice and then wandered around the market, drink in hand, just trying to soak it all in. Come hungry or, at the very least, thirsty!

I don’t think anyone can really appreciate the degree to which Barcelona’s cityscape is dominated by the whimsical designs of the famous Catalan architect, Antoni Gaudí, until they witness it in person. Just walking to our hostel, we passed at least three of his towering masterpieces, sparkling in the sun (he was a fan of glitter) and commanding quite a lot of attention from tourists. Sandwiched between entirely normal buildings, there would be a confetti-covered edifice with warped balconies and peculiarly shaped windows that would be entirely at home in a Salvador Dalí painting. (That’s my cultured adult comparison, but it also did not escape my notice that Casa Milá looks exactly like Floop’s castle from Spy Kids. Uncanny.)

There’s a number of museums and tours entirely dedicated to Gaudí’s work and his obvious penchant for the less-ordinary, but it was far too hot to spend the day standing in queues, so we opted for wandering past his buildings instead and had a great time. Here are a few of the best-loved examples of Gaudí’s weird and wonderful genius:

The one attraction that I had been most looking forward to visiting in Barcelona was the immensely popular World Heritage-listed Park Güell, an expansive network of parks that sit above the city on Carmel Hill. The first thing we did when we arrived was hop on the #24 bus and scoot our way up to the Park.

Also designed by Gaudí, and every bit as eccentric as his other works, the park is an absolute masterpiece and has several dozen great spots for panoramic views of Barcelona below. Heartbreakingly, we missed out on the ubiquitous mosaic terrace photo, as access to the “Monumental Zone” is regulated by tickets that were completely sold out. I still felt quite satisfied with the views from other terraces and even just the interesting walk around the snaking paths of the park, but if it’s important for you to see the terrace, reserve a ticket online in advance for 7€.

Even though we had already enjoyed our share of tapas on Mallorca, I was still eager for more—when in Barcelona! Tapas are tiny plates of food, wonderful for sharing and sampling a large variety of tasty nibbles rather than having to choose just one thing off the menu. Some restaurants will serve up more traditional tapas, like chorizo and patatas bravas and croquettes, but we also found wonderful places that offered a variety of small plates, including everything from gazpacho and tiny open-faced sandwiches with meats and cheese, to mini hamburgers and baby bowls of ice cream, all for 1.5 – 2.5€ per plate. The whole experience is incredibly fun, not to mention delicious, and no trip to Barcelona is complete without going for tapas at least once.

And while you’re nibbling tapas, grab a drink! There’s truly no better way to spend a summer afternoon in Barcelona than perched on a shady outdoor table on La Rambla, people-watching with a gigantic glass of cold sangria in hand. We indulged a time or two (or four).

Read more about our travels through Spain

Paragliding from Planpraz in Chamonix-Mont-Blanc