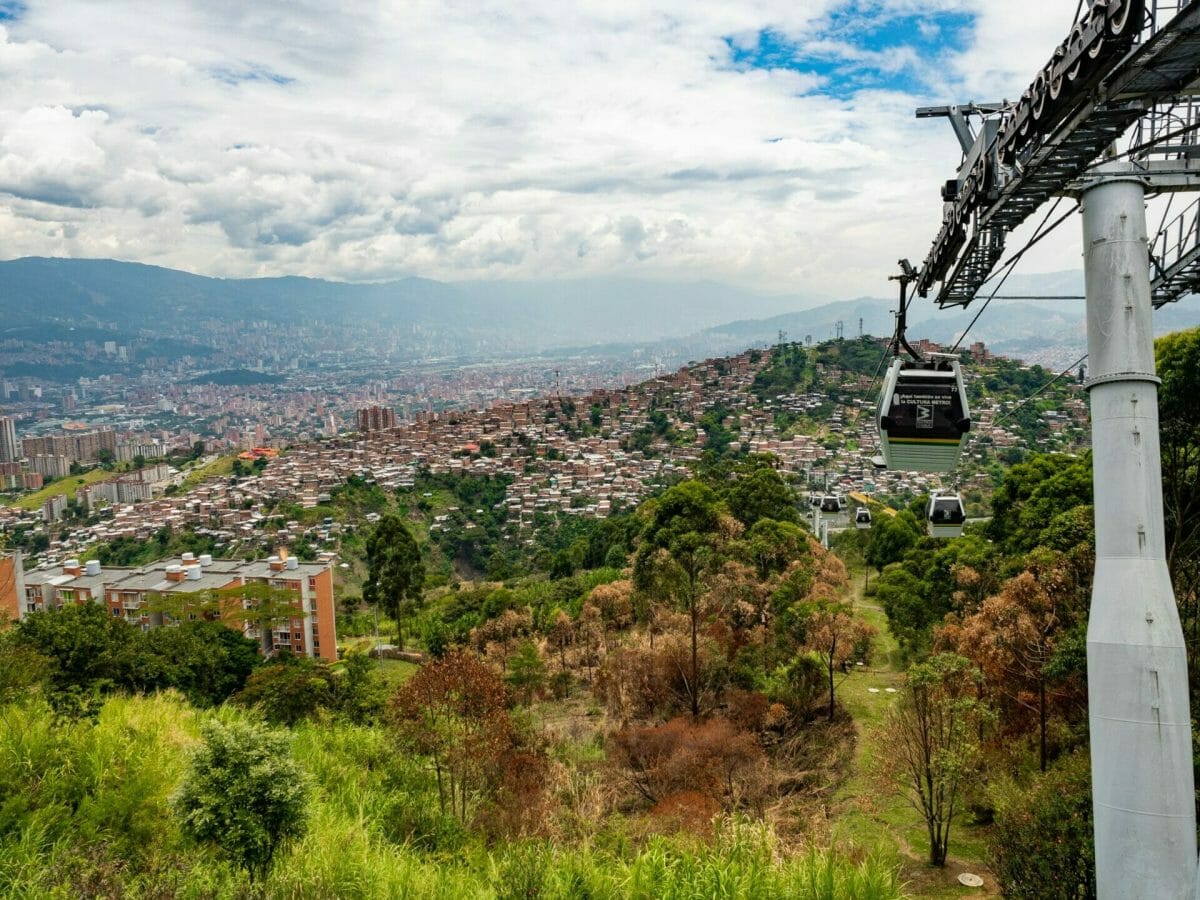 How to get from San Gil to Medellín (bus or flight): Colombia transport guide

Medellín is Colombia’s trendiest destination, risen from the ashes of its turbulent Pablo-tainted past to become one of the most innovative and progressive cities in all of Latin America. From the adventure hub of San Gil, you’ve got both public buses and flight routes available to reach Medellín— but how do they compare and which should you choose?

This Colombia transport guide will cover absolutely everything you need to know about travelling from San Gil to Medellín via bus or plane, including how to get to the bus terminal in San Gil, how to travel by bus to Bucaramanga, how to bus or fly onwards to Medellín, and how to use Medellín’s Metro system to reach your hostel.

Travelling between other popular destinations in Colombia? Check out all of my Colombia transport guides:

Taking the bus from San Gil to Medellín

Buses in Colombia are incredibly nice, very inexpensive, and perfectly safe, which makes them the best transport option about 99% of the time (including the journey between San Gil and Medellín). Even though it’s not possible to get a direct bus, there’s only a single and very simple transfer involved, which I’ll walk you through below.

Step 1: Get to the bus terminal in San Gil

The bus station in San Gil (Terminal de Transportes, NOT Termanilito) is only 2km out of town along a large main road, so it’s super easy to walk if your bags aren’t too heavy. Alternatively, you can get your hostel to call a taxi for you, which should only cost around 5,000COP ($2AUD).

A number of bus companies operate the route between San Gil and Bucaramanga, including Cotrasangil, Copetran, Omega, Berlinas del Fonce, and Expreso Brasilia.

The cheapest option is one of the small Cotrasangil busetas, which run every 20min and cost just 12,000COP ($4.80AUD). However, the larger buses only charge 15-20,000COP and can be a bit more comfortable, which is certainly appealing on the 2.5-3.5hr drive from San Gil to Bucaramanga.

Note that it’s sometimes possible to purchase your bus tickets all the way to Medellín from the terminal in San Gil— you still have to transfer buses in Bucaramanga, but you don’t need to queue up at the ticket counter when you get there. It’s not possible with every company (like Cotrasangil), so that might dictate who you travel with.

If you haven’t already, you’ll need to purchase bus tickets onward to Medellín when you arrive in Bucaramanga. Expect to pay 60-80,000COP for your ticket, depending on which company you choose (Expreso Brasilia, Copetran, Omega, Bolivariano).

A fun bonus of travelling the entire route with Expreso Brasilia was the lounge on the second level of the bus terminal, where we got to use free wifi and enjoy clean bathrooms— a member of the staff even came to collect everyone when it was time to board our bus!

Before you get on the bus

The bus terminal in Bucaramanga is quite large, so take the opportunity to stock up on snacks and other goodies for the bus. I was pretty excited about the Colombian cookies and sweets I picked up for 2,000COP (as well as the Subway footlong, hehe).

Just before you get on the bus, staff will sight your ticket, tag your large bag (you get a copy of this tag to reclaim your bag later), and then place it under the bus. This is totally safe, but it’s always a good idea to keep your valuables in a carry-on just so they don’t get too knocked around on the journey.

Step 4: Travel by bus from Bucaramanga to Medellín

The journey between Bucaramanga and Medellín can take anywhere from 8-10hrs, and since it’s Colombia and nothing ever arrives on time, plan on getting to Medellín at least 1-2hrs later than your ticket actually states.

Tardiness aside, Colombian buses are incredibly nice, and you can expect superbly comfortable reclining seats and even seat-back TVs playing Spanish films with most companies. The only irritating aspect of bus travel (and this is mostly true for all of Latin America) is that the aircon will be blasting— make SURE you have some layers with you on the bus or you will not have a good time.

Step 5: Get to your hostel in Medellín

When you do finally arrive into Medellín, reclaim your bag using the ticket the staff previously gave you and then either take the Metro or order an Uber to your hostel.

Public transport from the bus terminal in Medellín

Buses from Bucaramanga arrive into Medellín’s busier northern bus terminal (Terminal Norte), which is directly and very conveniently connected to the Caribe Metro Station. Follow signs to the Metro and then purchase a ticket for 2,550COP ($1AUD). You can buy the ticket directly from the counter, and there’s no need to say where you’re headed— all tickets on the Medellín Metro cost the same!

From Caribe, hop on a train towards La Estrella and then disembark at Poblado Metro Station, which is located in the popular tourist district of El Poblado and should be walking distance from most hostels.

Wondering what to do and where to stay in Medellín? Check out my complete guide: 9 AWESOME THINGS TO DO IN MEDELLÍN, COLOMBIA’S MOST INNOVATIVE CITY

Uber from the bus terminal in Medellín

If you want to take an Uber to your hostel in Medellín, it should only cost around 10,000COP ($4AUD) from Terminal Norte to El Poblado, although that is subject to change based on time of day or how busy the roads are.

If you aren’t keen on travelling for 11+ hours, you can shave a bit (but honestly not much) time off your journey by flying between Bucaramanga and Medellín. You’ll still need to grab a bus from San Gil to Bucaramanga (3hrs) and a taxi to the bus terminal (25min), but it might be worth it if you’re on a seriously tight schedule.

Step 1: Get to the bus terminal in San Gil

Following the exact same directions to get to the bus terminal as described for the bus journey, you can either walk 2km from San Gil to the Terminal de Transportes or take a quick taxi for 5,000COP ($2AUD).

Also following the same instructions as the bus journey above, you need to purchase bus tickets from San Gil to Bucaramanga. A number of bus companies operate this route, including Cotrasangil, Copetran, Omega, Berlinas del Fonce, and Expreso Brasilia.

The cheapest option is one of the small Cotrasangil busetas, which run every 20min and cost just 12,000COP ($4.80AUD). The larger buses charge 15-20,000COP and can be a bit more comfortable, however, which is certainly appealing on the 2.5-3.5hr drive from San Gil to Bucaramanga.

Step 3: Get to the airport in Bucaramanga

The easiest way to get from the bus terminal (Terminal de Transportes de Bucaramanga) to the airport (Palonegro International Airport) is just to grab an inexpensive Uber or taxi out the front. You can expect to pay around 30,000COP or $12AUD for the 25min drive to the Bucaramanga Airport.

Step 4: Fly from Bucaramanga to Medellín

Avianca, Viva Air, and LATAM can all get you from Bucaramanga Airport to Medellín, but only Avianca actually has direct flights. A direct flight usually costs around 250,000COP ($105AUD) and takes under an hour.

If you’re trying to save time by flying rather than doing the considerably cheaper bus route from San Gil to Medellín, adding a layover to the trip basically defeats the purpose, so I wouldn’t even bother looking at anything other than direct flights with Avianca.

Remember that you also need to factor in some time to actually check-in for your flight (1-2hrs early). Buses are notoriously late in Colombia, which means it’s a good idea to allow several hours between your scheduled arrival in Bucaramanga and your flight.

Step 5: Get to your hostel in Medellín

Public transport from the airport in Medellín

José María Cordova International Airport (MDE) is actually located around 35km out of Medellín, so there’s no option to just hop on a quick and convenient metro train to get to El Poblado.

The best option in terms of shared transport is the official Aeropuerto-Combuses (busetas) departing near gates 2A and 2B (10,000COP or $4AUD; buy your ticket from the driver). It will take approximately 60min to get to Medellín on this bus, which terminates at the Hotel Nutibara.

From here, walk about 300m to the Parque Berrío Metro Station, purchase a one-way ticket (2,550COP / $1AUD), hop on a train bound for La Estrella, and disembark at Poblado about 15min later. Allow around 1.5-2hrs to get to your hostel in El Poblado using this option.

Uber from the airport in Medellín

There are heaps of taxis operating from the airport, and although it’s safe enough to trust these registered companies, the taxi fare into Medellín can be quite expensive (90-100,000COP or $36-40AUD, which is the price of your flight!). Uber is a bit cheaper at 80,000COP ($32AUD), but still adds a considerable amount to the overall cost of flying.

Thanks to a newly completed tunnel running through the mountains, the hour-long drive from the airport to Medellín now only takes around 30min, although this can certainly vary depending on time of day and traffic. If you’re not overly concerned about an extra $25AUD and you just want to get to Medellín quickly and without hassle, this is your best bet.

Make the most of your time in Medellín: 9 AWESOME THINGS TO DO IN MEDELLÍN, COLOMBIA’S MOST INNOVATIVE CITY

Travelling from Medellín to Guatapé

Guatapé is Colombia’s most colourful town, located just out of Medellín on the shores of an enormous lake. It’s unquestionably one of the best places to explore from Medellín, and actually one of my favourites in whole the country— thankfully, it’s super easy to get there. From Terminal Norte in Medellín, hop on a 2hr bus to Guatapé (14,000COP); usually these depart from the lower level, ticket window #14.

Check out my detailed Guatapé travel guide: EVERYTHING YOU NEED TO KNOW ABOUT VISITING GUATAPÉ AS A DAY TRIP FROM MEDELLÍN, COLOMBIA

Travelling from Medellín to San Gil

If you’re travelling from Medellín to San Gil, just reverse these directions! All the same prices and instructions still apply.

11 AMAZING THINGS TO DO IN SAN GIL: A GUIDE TO COLOMBIA’S ADVENTURE CAPITAL

HOW TO GET FROM BOGOTÁ TO SAN GIL: COLOMBIA TRANSPORT GUIDE

TRAVELLING FROM BOGOTÁ TO MEDELLÍN VIA BUS OR PLANE: COLOMBIA TRANSPORT GUIDE

EVERYTHING YOU NEED TO KNOW ABOUT VISITING GUATAPÉ AS A DAY TRIP FROM MEDELLÍN, COLOMBIA

9 AWESOME THINGS TO DO IN MEDELLÍN, COLOMBIA’S MOST INNOVATIVE CITY

11 amazing things to do in San Gil: a guide to Colombia’s adventure capital