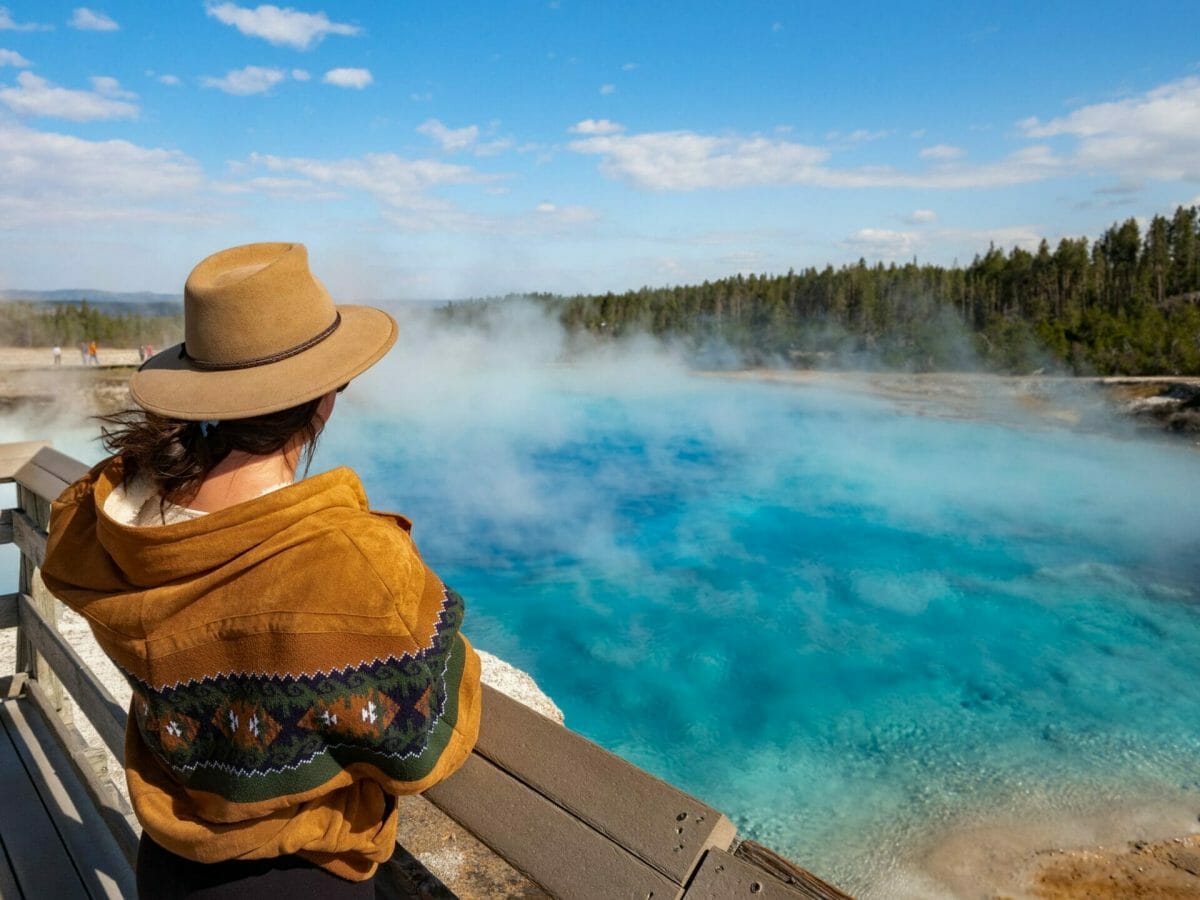 We spent this week exploring the country’s oldest national park, and despite both having been to Idaho, Wyoming, and Montana previously (as well as Dan having been to Yellowstone), we were suitably blown away by autumn in Big Sky Country.

The colours were amazing, the camping was unbeatable, and we even got a snow day to keep things interesting! This week will be genuinely hard to beat.

After a long drive from Oregon that began last week and finished on Friday night just outside West Yellowstone, we finally arrived in Montana for the main event.

Dan had visited Yellowstone on a previous trip (albeit 11 years ago) and was extremely keen to tour me around to all the best spots, but despite all the excitement, I really don’t think I had any idea how amazing this park is until our first few stops.

In fact, I hadn’t given Yellowstone hardly any thought in my entire life beyond ”America’s first  national park” and “lots of geysers”, but anyone who has visited can similarly attest: the park is SO much more than that, an insane landscape unlike anything else in the world, bursting with unnatural colours and steaming at every turn.

It is totally surreal and completely amazing.

Being in Yellowstone is also like being on safari, constantly scanning out the window for bison herds (this is the only place in the world that bison have continuously inhabited since prehistoric times and their population is booming!) or bears (grizzly and black) or even wolves (which were reintroduced in the park in 1995).

With his patented “nature eye” (and his willingness to stop and ask anyone with a spotting scope what they are looking at), Dan was the perfect tour guide, identifying lone bison in the distant valley, bald eagles perched on treetops, and even a mother bear and her two cubs romping below the road.

We were constantly slamming on the brakes and craning our heads out the window just trying to take it all in!

Over the course of 3 days, we saw a solid chunk of the park— but could easily have spent twice as long wandering along boardwalks and driving through the valley in search of wildlife.

In case it wasn’t clear, Yellowstone exceeded my expectations SO MUCH, and in every possible way. There is truly no where like it, so it makes sense that it receives about 4x as many annual visitors as the second and third most-visited national parks. And the crowds here ARE crazy, even midweek in September there were traffic jams and filled car parks, but it’s popular for a reason!

The itinerary we followed isn’t necessarily the one I’d recommend, only because some of our stops and the order of things were affected by snow, but I would recommend just about all of our stops in general. Hopefully a dedicated post will be forthcoming— for now, here’s exactly what we got up to:

It actually snowed so much that we didn’t want to risk leaving camp, so we hung out in the van for a day!

Without question, Yellowstone is one of the most scenic places I’ve ever been. Even with less than ideal weather on several days, we had an amazing time and truly didn’t want to leave— but we have new places to see!

As we left Yellowstone Lake behind, we drove a short distance to enter Grand Teton National Park, and then indulged in our first shower of the trip. It’d been a long 12 days…

To top off an already brilliant day, we ended up finding the most insane campsite— just below an established NF site where 3 campers were sharing tight space, two other established sites sat completely unoccupied and offered the most incredible view of the Tetons, the yellow aspens, and the Buffalo Fork below.

We couldn’t believe that no one else was down here, but we laid in the back with open doors to watch the sunset and then enjoyed the Equinox Party we’d been using as an excuse to drink our fancy wine. Of course we stayed two nights, just to keep our view!

Although we’d originally intended to do a bunch of hiking in Grand Teton National Park, including the Teton Crest Trail, my broken toe required yet another change of plans that brought us into Jackson, Wyoming for the end of the week.

Dan managed to get out on a couple hikes in the area, one while I hung out in town with my high school BFF Marielle and another with Marielle and her boyfriend Patrick while I worked and watched their new puppy at the campsite.

We had excellent food, got a private tour of Melvin Brewing (Patrick is the lead brewer), soaked in secluded hot springs that were fed by a scalding waterfall, and just generally had an awesome time catching up with friends before rolling deeper into Wyoming on Sunday.

I’ll be honest, I’ve been pretty down about not being able to hike, but good company and amazing views made it so much easier this week. Here’s to hoping that I’ll be recovered enough for a short hike next week!

If you read my last update, you’ll know that I didn’t want to split all our Yellowstone photos across two posts (despite technically visiting across two calendar weeks), so I shortened the previous Week 28 post through Friday and tacked that weekend onto this post. For the record, we spent Saturday through Tuesday in Yellowstone National Park and the rest of the week meandering down into Grand Tetons and Jackson, Wyoming.

An epic afternoon of climbing at Lambs Knoll with Rock Odysseys