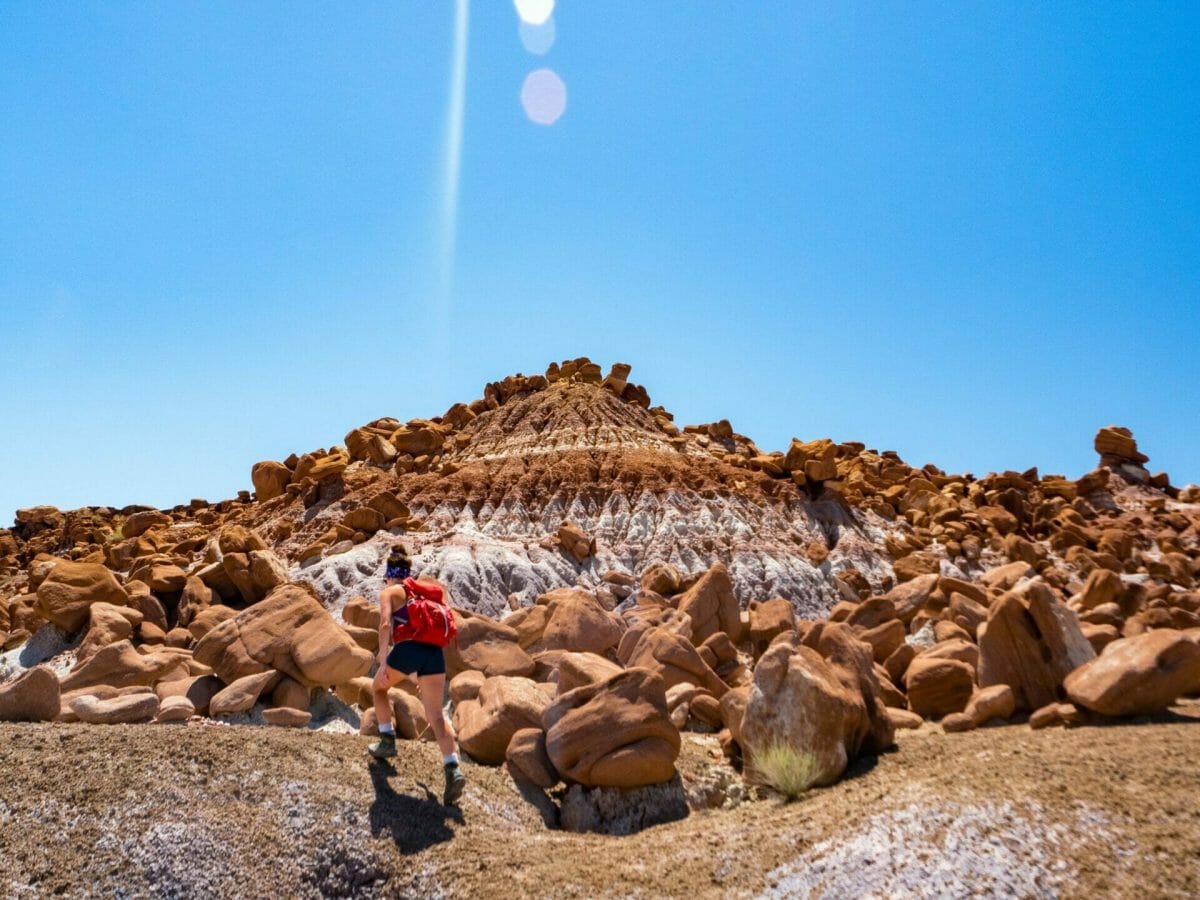 We hit the ground running this week, spending our first few days exploring a national park neither of us had visited before and the next several days revisiting one of the most scenic spots in the southwest, jam-packing our afternoons full of hiking. Between the insane rainbow of colours at Petrified Forest and the dramatic red rock canyons of Sedona, we were totally awe-struck by yet another incredible week in Arizona.

After completing the final leg of our long drive from the Superstitions near Phoenix all the way up to northeastern Arizona, we crossed into one of the most eagerly awaited destinations of the trip: Petrified Forest National Park. It’s not somewhere either of us had ever visited— in fact, I didn’t even know it existed until Dan suggested it a few weeks ago!

One look at the vibrant orange and purple logs turned to stone, scattered in the thousands across an equally colourful landscape, was enough to prompt an entire re-arrange of our plans, and I’ve been excitedly sneaking glances at photos online ever since.

Still, no amount of online research could have prepared us for the incomprehensible beauty of the Petrified Forest and the Painted Desert it lies within. Log-textured rocks in every colour and size litter across purple badlands and blue mesas. Perhaps I use this descriptor too often, but it has to be said: otherworldly.

A few weeks prior to visiting the Petrified Forest, we’d seen several large specimens of petrified wood in Valley of Fire State Park in Nevada. They were entirely underwhelming compared to what’s in front of us, but they did prompt me to learn a bit about how petrified wood is formed.

Over 200 million years ago, ancient conifer trees were transported via floodwaters from the vast forests that once covered Arizona and then buried under the soil, where mineral-rich groundwater slowly leached into the bark and between the fibres of each tree. While these minerals hardened within every microscopic air pocket, the trees themselves naturally deteriorated until all that remained was rock, still in the original shape and texture of the pine trunk.

Much of what makes the Petrified Forest so unique is that these logs are almost entirely comprised of quartz, lending an intense sheen and sparkle to every rock that you really don’t see with typical petrified wood.

Of course, the other incredibly special element here is the vibrant colour, caused by mineral impurities— purples and pinks from iron, blues from iron & copper, green from iron, copper & chromium… a veritable kaleidoscope.

We spent our first day in the park exploring the southern hikes and viewpoints, which is where the most spectacular petrified logs are on view.

We stopped at every single marked walk and overlook, but our favourite activity was an “off the beaten path hike” (which the National park encourages at select sites) through Jasper Forest (3mi).

Leaving the tourists behind at the overlook, we descended into the most colourful landscape we’d yet seen, a rainbow of petrified logs set against a surprisingly blue and purple backdrop. It was nothing short of fantastical.

The following day, we ticked off every single marked hike and overlook in the north half of the park, plus another incredible off the beaten path hike through the Blue Forest (3mi), which connects the Tepees viewpoint to the popular Blue Mesa loop through a rugged blue badland.

If the south end of the park is home to the most striking petrified wood, the north boasts even more colourful landscapes. And as part of the greater Painted Desert that runs through central Arizona, these were some of the most insane natural colours we’ve ever seen, and nothing like I’d expected.

We wrapped up our time in Petrified Forest with one final off the beaten path hike to Devil’s Playground in a distant, untouched corner of the park.

Through sheer luck and opportune timing, we managed to score one of only 3 permits to this area given out per week (yes, 3 per WEEK!) and set off Wednesday to explore the wild landscape, scattered with petrified wood and dominated by intense blue hoodoos (blue-doos, if you will).

We spent 4hrs hiking only 7.5mi (12km) on relatively flat terrain, a true testament to how captivating this landscape is. It was hard to leave, but with Sedona as our next destination of the week, there’d be plenty more natural beauty to look forward to!

Having both been to Sedona at the end of last year, we chose 2 new hikes and tackled them across the coming days.

Our first excursion was out to Boynton Canyon (8mi), insta-famous as the location of the hidden Subway Cave. Indeed, finding the cave proved somewhat challenging, with absolutely no signage or maintained trail to follow, but we did eventually make our way up into the circular cave for one of the most incredible views over Sedona’s red rock canyons.

Despite suspicions that we’d be in for another Devil’s Bridge experience (queuing for 30min+ to walk out onto the bridge), there was only one other girl there, and she quickly scooted along after getting her photos, leaving us to enjoy the cave in total solitude— rare anywhere in Sedona, let alone one of these “secret” spots!

Continuing onwards from the cave towards Boynton Canyon, we found ourselves suddenly alone on the previously busy trail. In fact, the only other pair we passed was lost and searching for the the Subway Cave

Once we got to the end of the trail, this made even less sense— Boynton Canyon is SO beautiful, a massive rock amphitheatre surrounded by towering red rock cliffs and lush pines, the walls sending off dramatic echos in every direction.

The only ones here, we sat and marvelled in the comfortable shade for the better part of an hour, all the while puzzling over why no one seemed interested in hiking past the Subway Cave… yet very pleased to have the view all to ourselves.

Our final hike of the week was West Fork along Oak Creek (7mi), one of the most spectacularly beautiful places in Sedona (big call, but true!).

Under the shade of towering red sandstone cliffs (highly reminiscent of Zion), we waded back and forth across the cool river for several hours. The temptation to swim was great, but low water levels meant it would have been more of a seated experience, so I settled for splashing around up to my thighs while Dan sat nearby. The perfect afternoon and a great end to the week (before our long Sunday drive to the North Rim).

It was another excellent week of 100% free camping, largely in beautiful forested areas that provided excellent shade and cool mountain air. The unfortunate side-effect of our pine-scented campgrounds, though, were the hordes of mice that saw fit to sneak into the van through some unknown access point… we made it 7.5 weeks without a single visitor, and in the last week and a half, we’ve had more than half a dozen confirmed mice in the van. Ugh.

Our cheapest week in quite a while, we managed to come in at just $283 total (split between 2), thanks again to spending the majority of our week in the national park. It feels good to be living cheap and still exploring so much!

Maluaka Beach, the best place to snorkel with turtles on Maui