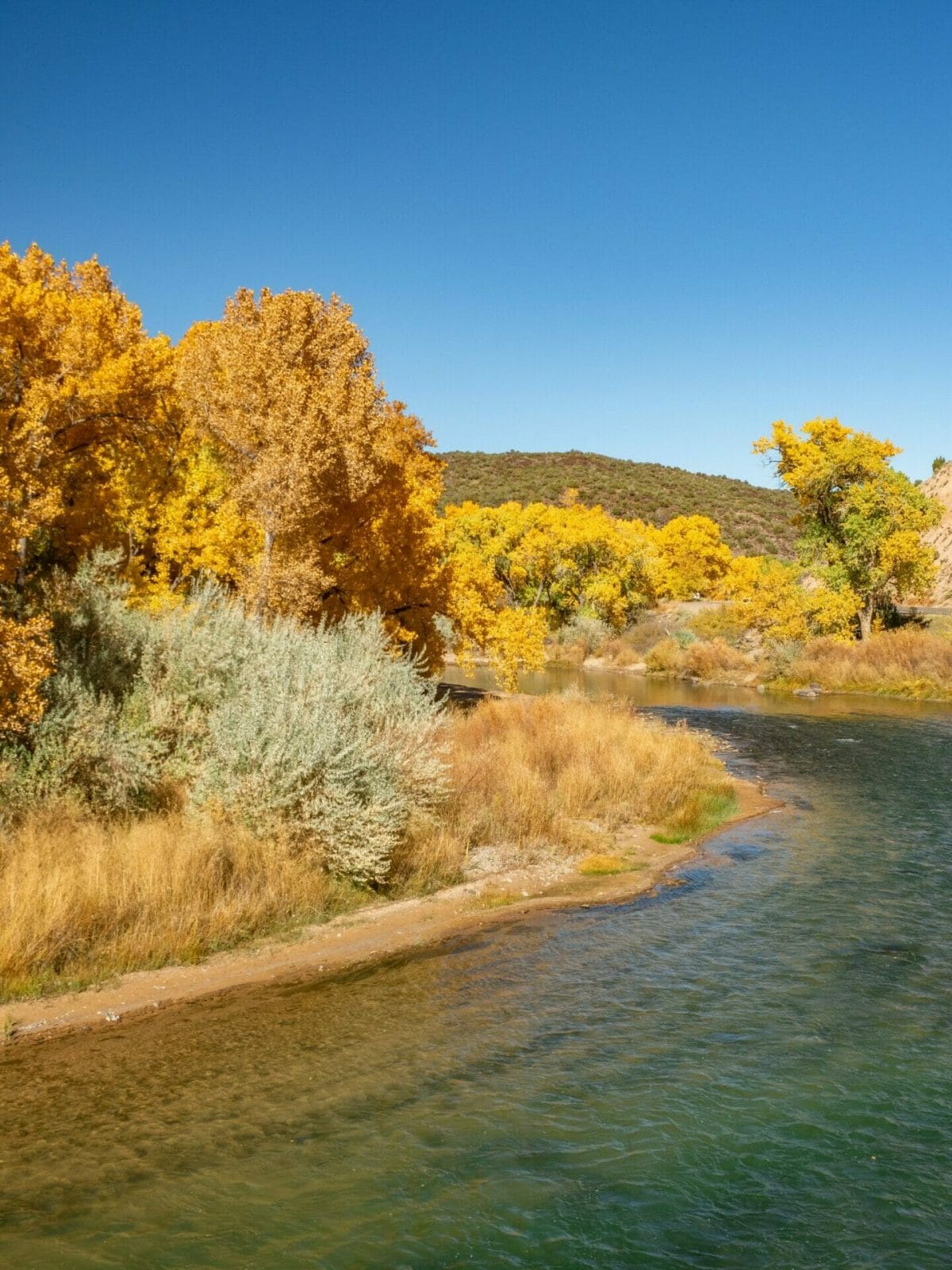 Travelling deeper into New Mexico, we definitely enjoyed the warmer days and above-freezing nights that had brought us down here in the first place, but also the unexpected autumn beauty of the desert and all the incredible Nuevo Mexicana cuisine we could eat. For a last-ditch effort to escape the cold, I don’t think we could have asked for a better detour.

We began our week in Taos, which was reported to be rather uninteresting by several people— and therefore a delightful surprise, given that I found it plenty interesting and even quite charming!

This was likely due in large part to our arrival right in the middle of the weekly farmer’s market, which transformed the central plaza into a bustling hub of tamales, ristras, and colourful spices.

The attendees were all Hispanic farmers, sunburnt cowboys, or dread-locked hippies, which we’d later discover to be more or less true for the entire state. I love the constant paradox of New Mexico, and I think we can reasonably attribute much of it to this curious blend of residents.

We wasted no time digging into our first New Mexican meal, ordering half a dozen homemade chicken tamales from a local carnicería, but it would take me another week to convince Dan that we needed a decorative string of chiles in our van and at least that long to settle on the perfect ristra— still, there was a palpable excitement in arriving into New Mexico amidst friendly Spanish chatter and an entirely new motif, almost as if we’d crossed an international border into some foreign country without even realising.

And that’s about how I’d describe the resemblance between New Mexico and Colorado or Arizona— bordering countries with only passing similarities.

The Taos Ski Valley, which permits free overnight camping in a designated lot at the base of the lifts, was a deviation from the feeling of already being in Mexico, and I suppose just a further testament to how diverse this state really is.

While Dan set off to hike Wheeler Peak, I nursed my broken toe and caught up on work under the snow-capped shadow of New Mexico’s tallest peak.

Santa Fe and Albuquerque delivered even more in the way of local culture as we ate our way through some of the cities’ best New Mexican restaurants (the green chile enchiladas and pozole at The Shed were practically diabolical) and redoubled efforts to find the best green chile cheeseburger (a local specialty, although the best was definitely yet to come).

The final excitement of an already wonderful week was catching up with my cousin Tara, whom I hadn’t seen since my high school graduation 10 years ago, and meeting her lovely family in Albuquerque. Both of her kids were eager to test out our van bed (which Sylvia adorably called our “tiny home”) before determining that it was indeed very “cozy”.

We ate green chile pizza, sampled record-breaking hot sauces, drank local beer, and listened as 6yo Logan read aloud the final chapter of Harry Potter and the Sorcerer’s Stone after dinner. I always love these spontaneous family reunions, and even better with New Mexico as the backdrop.

Although we rolled out of Albuquerque and spent our weekend at White Sands National Park, I’ll include all pictures of the park in my next post for the sake of continuity (but check out our Halloween costumes below!).