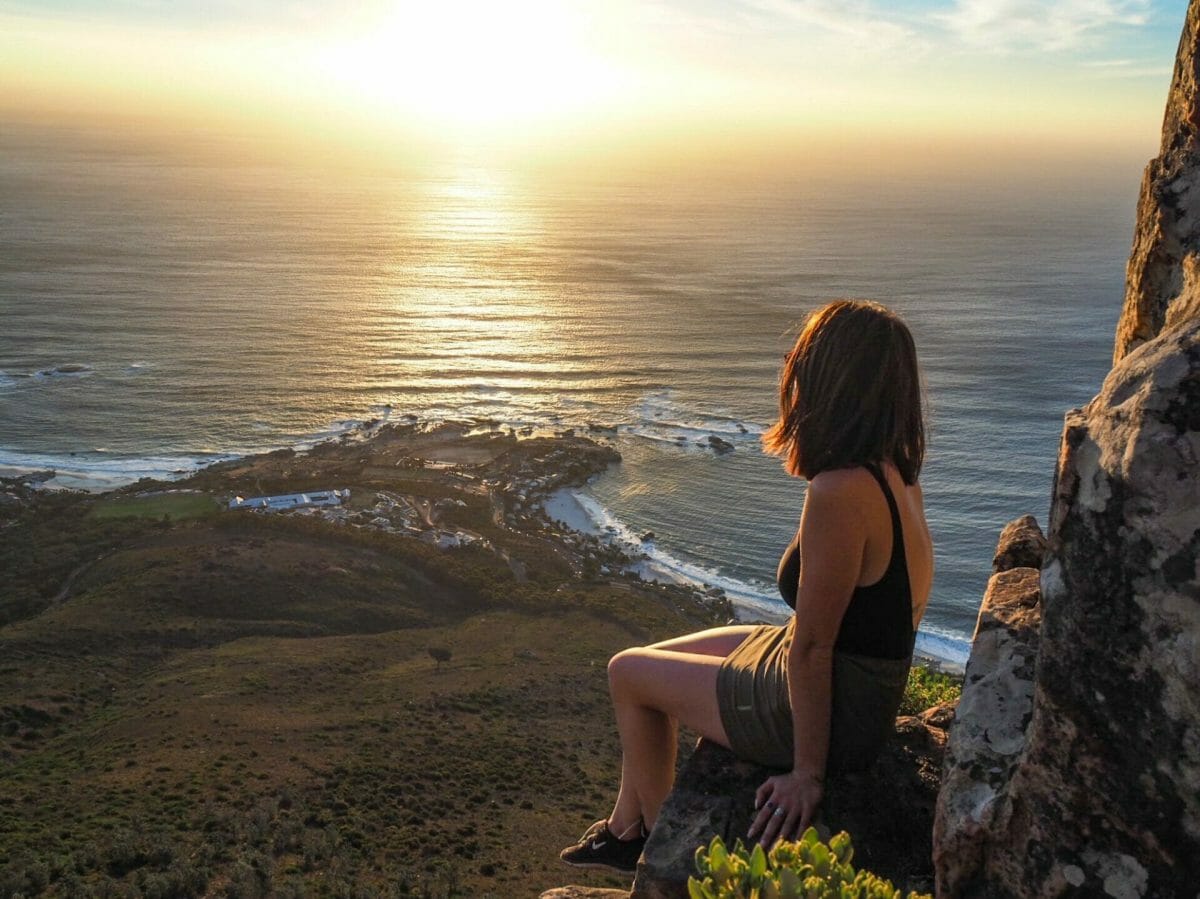 A Christmas hike up Lion’s Head

Christmas is finally here (!!) and there seems no better way to wrap up what has already been a spectacular festive season in South Africa than by hiking Lion’s Head and taking in views of Cape Town from above. After meeting up with my friend Aimee, who is also travelling around southern Africa at the moment and equally keen to tick off some of CT’s best hikes, we set off in the direction of the trailhead via Uber. Time got away from us a bit this afternoon as we sat drinking and catching up in the painfully beautiful Camps Bay, but, spoiler alert: the hike isn’t actually that long, so it ends up being perfect timing for sunset.

All the details: Lion’s Head hike

Getting there: Take an inexpensive Uber from anywhere in Cape Town to the Lion’s Head trail at the base of Signal Hill. When you’re done, catch a taxi from a small rank at the trailhead, just be sure to negotiate price before you get in and be wary of anything suspicious (R80 should be more than enough to get you across the city).

Length of walk: It’s less than an hour to the very top of the mountain, and a little over 30 minutes back down. All up, the walk is about 5km and won’t take up more than a couple hours of your day.

Difficulty: The trail is occasionally steep, but still not overly difficult if you have a basic level of fitness. At the end, there is some climbing aided by metal ladders and chains— the highlight of the hike, in my opinion!

Best time to hike: Time your hike so that you can catch sunset from the top. If you’re an early bird, I hear sunrise is equally fantastic (but good luck getting me out of bed before 8am).

Popping out of the car at the start of the trail, there’s a parks employee lurking around the signage who stops us to make sure that we have water (we do) and pull-overs (we do not). Despite his warnings that it will get quite chilly when the sun goes down and the wind picks up, we are both fairly confident that the body heat generated during our ascent will be plenty to carry us through the sunset and the quick walk down. I ask how long he thinks it will take to reach the top, and he responds by grabbing my hand and inspecting my nails, which apparently give an indication of 1 hour. My nails are actually painted quite nicely at the moment, so they really may not be an accurate representation of my hiking abilities (also, when are nails ever) and more importantly I feel a little unfairly judged just for trying to look presentable for one time in my life!

Determined to prove the parks employee wrong, we set off at a brisk pace up the mountain. The trail is plenty wide and not overly steep, so it’s an easy hike until we reach about the 2/3 way, when the moderately-graded trail gives way to a bit of scrambling, often aided by chains and ladders. It’s not ideal to have my camera flopping around my neck while trying to climb, but this is still the best part of the trail and somewhat reminiscent of the famed/dreaded (depending on who you ask) ladder section of the Tour du Mont Blanc.

Once at the top (in well under an hour, thank you very much), Aimee and I spend a few minutes staking out the best spot from which to watch the sun go down before settling on a little rock ledge overlooking Camps Bay. Even though I had never been to South Africa before this trip, I always had it in my head that Cape Town would be a great place to live, and I feel that thought has only been confirmed by the almost unbelievable beauty of this coastal city. Of course, the view from the top of Lion’s Head absolutely does not disappoint and it’s only the fact that we didn’t bring a headlamp to scramble down in the dark that forces us to finally, and quite reluctantly, vacate our little perch.

We power along on the way down, thankfully making it past the climbing (which is quite challenging when descending, actually) before it really gets dark. Given that I am the clumsiest person alive, I am still stumbling along on the trail, but at least I’m not plunging to my death on the slick rocks. Once at the bottom, we hop in a taxi and return to Camps Bay to split a well-deserved bottle of wine and cheers to a very merry Christmas in Cape Town.