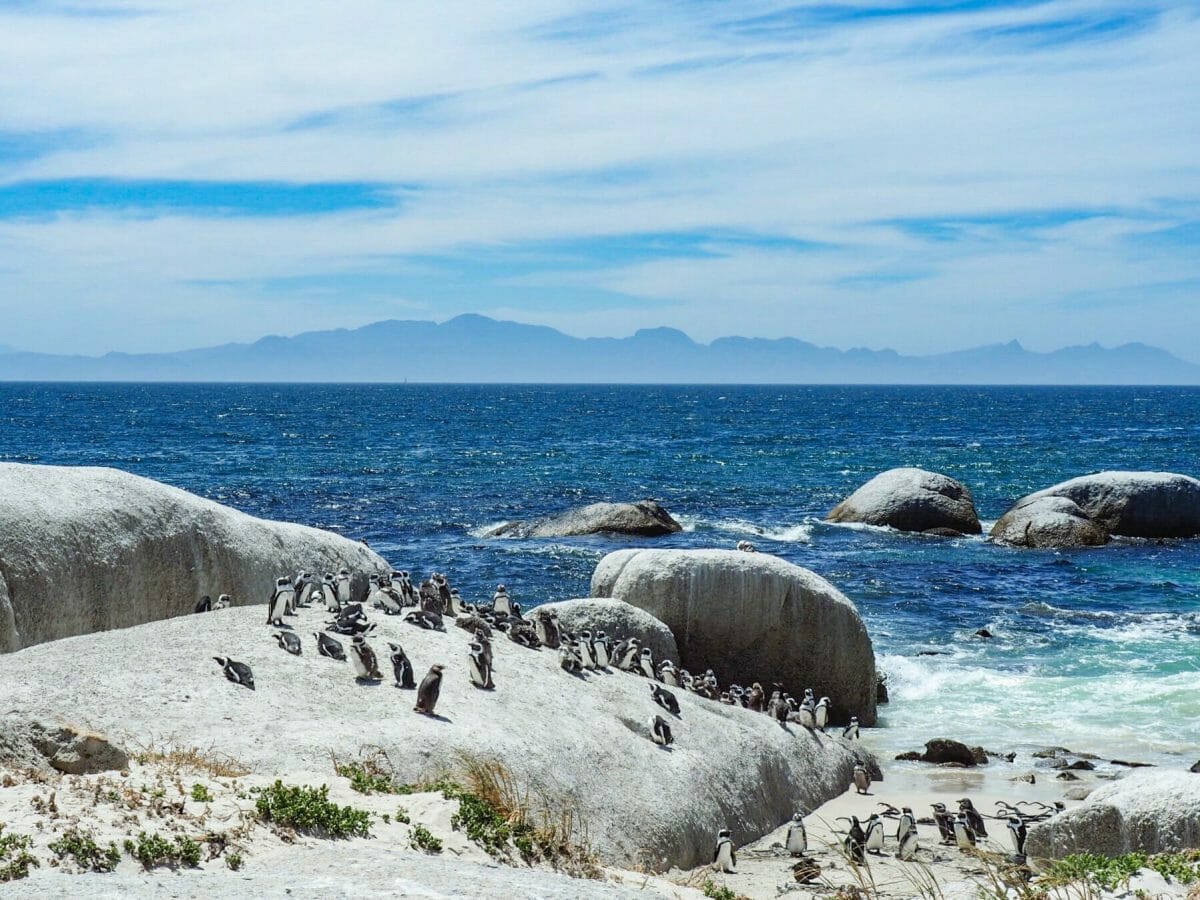 South Africa is so overflowing with scenic drives and stunning road trips that you could easily spend a year zig-zagging around the country and still leave beautiful places unexplored. Given that we don’t have a year, though, mum and I drove the famous Garden Route from Port Elizabeth to Cape Town last week and are now finishing up our time in Cape Town together with another of SA’s most popular drives, the Cape Peninsula.

All the details: Boulders Beach & Cape of Good Hope

Cost: Take a kayak tour around Boulders Beach to see the famous penguins for R300, and then walk along the boardwalks to see the penguins up close at the National Park for R75. Continue on to Cape Point Nature Reserve for R147 per person.

Getting there: The best way to explore the Cape Peninsula is definitely by car. However, there are a number of tours that will include all of these stops, such as the red City Sightseeing bus tour for R530.

Where to stay: If you are looking to stay somewhere closer to the Cape Peninsula, try one of the Airbnbs in Muizenburg! You’ll spend less time driving from Cape Town and more time enjoying the scenery of the Peninsula; plus, it’s a beautiful area in and of itself!

What to do: After you’ve seen the penguins by kayak and snapped photos of them on the beach, spend the afternoon exploring the Cape Peninsula, climbing up to the Cape Point Lighthouse, and walking out to the Cape of Good Hope.

Top tips: Start your day early to fit everything in, and grab lunch in Simon’s Town (near Boulders Beach) before heading to the Point, as food is limited and very expensive within the Nature Reserve.

Departing from our apartment in Muizenberg, just south of Cape Town, we continue down the coastline via Kalk Bay to Simon’s Town for the day’s first activity: kayaking with cape fur seals and African penguins. After checking in with our guide at the harbour, Mum and I situate ourselves into one kayak while Cal joins up with an SA lady and we all set off into the Indian Ocean. It’s mum’s first experience sea kayaking so she is a bit surprised by the considerable chop, not to mention less than impressed by my poor paddling efforts as I routinely drop the oar to take photos (I totally warned her that would be the case, though, so she should have known what she was getting into when she agreed to be my partner).

Penguins on the move

Cal’s boat sails ahead of the group while mum and I lag behind, but the scenery is just so beautiful that I can’t help myself. Before too long, we spot our first grouping of African penguins and actually pull the kayaks ashore to see them a little closer. These adorable little birds, also called jackass penguins for a reason I’m still not completely clear on, live only in southern Africa, particularly along the Cape Peninsula, and are at risk of becoming endangered due to changing climate. One of the largest colonies of African penguins is on Boulders Beach in Simon’s Town, so after stopping to see a few dozen penguins on the shore, we hop back in the kayaks (I’ve been swapped to be in Cal’s kayak because mum is getting tired of carrying my dead weight) and continue our paddle towards the famous beach to see an estimated 4,000 penguins.

Not only is the suitably boulder-covered beach dotted with thousands of waddling penguins, there are also huge groups of little black heads bobbing around us as many of the penguins swim out into the ocean for the day, in search of food. A beach-full of penguins is every bit as cute as it sounds. After a lot of squealing, we return to the harbour, passing several dozen fur seals on the way who splash and swirl about in the water, and leave the kayaks behind to continue our trip along the peninsula.

Hopping in the car, we drive 5 minutes to down the road, hoping to see our penguin friends again from land along the Boulders Beach boardwalks. Entry to the National Park is just R75 per person and, however, crowded it may be, it’s totally worth seeing the penguins from the beach size as well, since the paths and boardwalks get much closer to the penguins than we were able to from the water. It reminds me a little of Phillip Island in Australia, where you can watch hundreds of little penguins come in from the ocean and waddle up to burrows and man-made shelters in the brush, the difference being that this is in the middle of the day and also it’s Africa, so it’s automatically more exciting.

After our romp with the penguins and a great seafood lunch, we continue our drive towards Cape Point, getting stuck in a long line of cars still 15km from the actual Cape. Luckily, the Point is well worth it when we do finally arrive. After a stroll along the gorgeous coastline towards the Cape of Good Hope, Cal and I trek up the hill towards the Cape Point Lighthouse while mum takes the funicular up the hillside to meet us for the final steep climb. The view is inarguably stunning and I take about a million photos, but of course they can’t capture the crazy wind and the overwhelming smell of saltwater.

Finally, we pull ourselves away from the view and drive on just a few minutes further to the Cape of Good Hope, our final stop of the day. We are all disappointed to learn that it’s not actually the most southern point of Africa, rather the most southwestern point, but it doesn’t take away from the dramatic coastline, even more beautiful as the sun starts dipping down and lighting up all the rocks. For me and mum, it’s the end of another phenomenal day in SA, and for Cal, it’s a pretty knock-out first day in Africa.

A CHRISTMAS HIKE UP LION’S HEAD

STELLENBOSCH & FRANSCHHOEK: A GUIDE TO WINE TASTING IN THE CAPE WINELANDS

A guide to overlanding in Southern Africa, Part III: What to pack