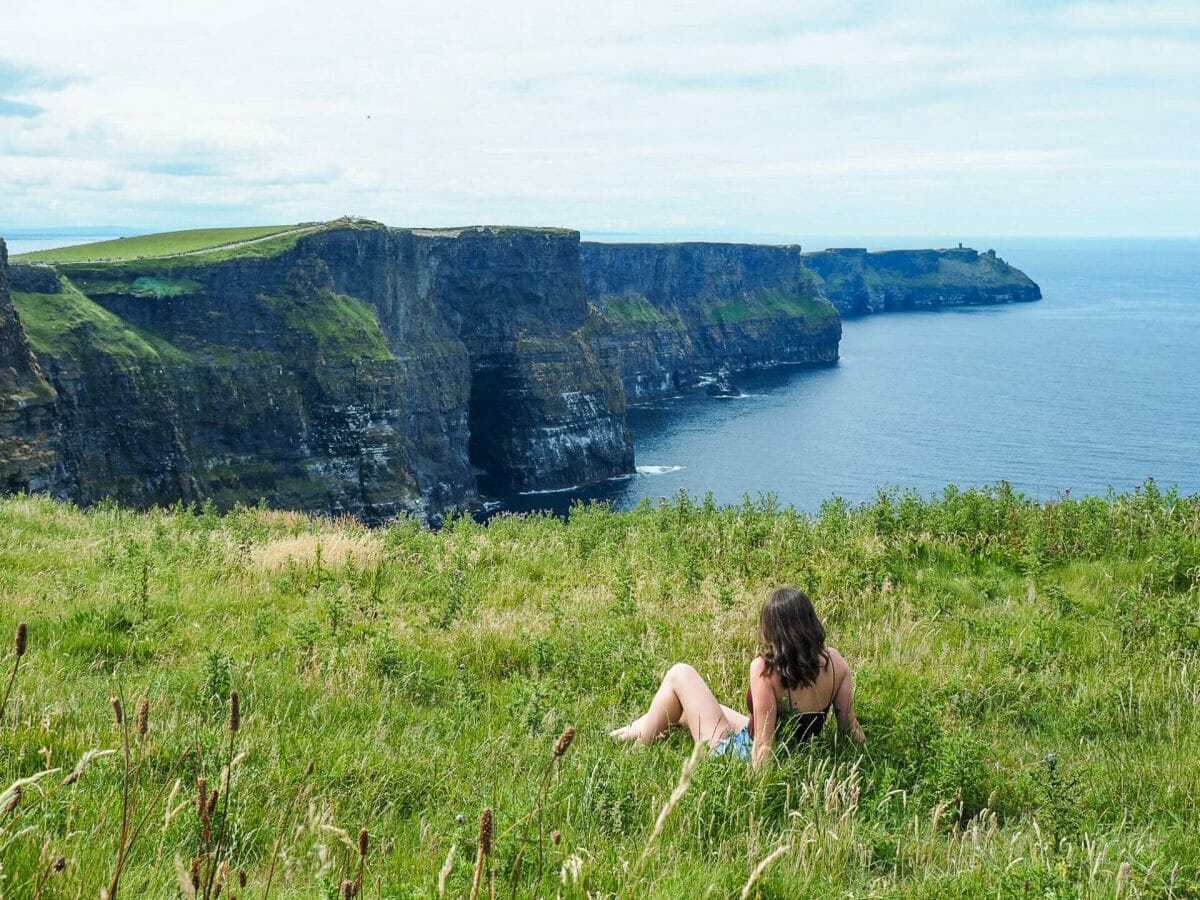 Wild Atlantic Way: Adventuring from the Cliffs of Moher to Galway city

Getting up bright and early for another long day of adventures in Ireland, my friend Josey and I meet up with our Wild Rover Tours bus at 7am and settle in for a somewhat lengthy drive across the country to the Cliffs of Moher. We actually have a designated tour guide (not just a driver) on this trip, an Australian who has moved to Dublin to embrace the Irish roots on her mother’s side, and she is a veritable wealth of knowledge on everything from Celtic symbolism to war history. As a result, our morning drive is peppered with information that I really ought to have (but definitely did not) know about the fight for Irish independence and the civil wars that ensued, as well as a running commentary on everything we are passing.

All the details: Cliffs of Moher day tour

Cost: Visit the Cliffs of Moher and Galway city on a Wild Rover day tour for €50. (As always, no one is giving me any incentive to mention this company, I am recommending them entirely of my own accord after a wonderful day tour!)

Getting there: Meet the Wild Rover bus on O’Connell Street near the Savoy Theatre at 7am, and then enjoy a long day on the bus, being shuttled around to many points of interest along the Wild Atlantic Way before returning to Dublin around 9pm.

Where to stay: Abbey Court Hostel, just off O’Connell Street and about a 5min walk from the pick-up point, offers dorm beds ranging from €10-25.

Lounging right on the edge of the Cliffs

It’s around 11am before we reach the Cliffs and are given several hours to explore the vast network of paths and viewpoints on our own. Josey and I immediately set out, stopping frequently for photos of the dramatic coastline as it plunges to the Atlantic below, and it’s not long before I am, yet again, overwhelmed by the beauty of Ireland. Although some of the walkway nearest the Visitor’s Centre is separated from the Cliff by a short rock wall, we only have to walk about 10 minutes before there is nothing between us and the edge, making for some incredible views and amazing photos.

These 215m tall cliffs span an 8km section of the Atlantic coastline, offering striking views down onto the turbulent sea below, over to the Aran islands, and all the way to the Dingle Peninsula. Geologically, the Cliffs of Moher date back as far as 300 million years, during which time the striated sandstone has been worn away by intense waves and wind to form the ruggedly beautiful coastline we see today. But, as with everything in Ireland, the legends are really what make this place special.

My favourite is the story of a king who was flaunting his wealth to his starving subjects, only to accidentally drop the keys to his castle in the centre of town. One of the village people found these keys and angrily hurled them into the sea, where the rest of the castle soon followed. Now, the entire kingdom lies under the Atlantic, rising only once every 7 years for the opportunity to be unlocked and returned to shore. However, it is said that if you witness the kingdom rise out of the sea, you won’t live to see it return. Thankfully, I did not see any castles appearing out of the ocean during my time at the Cliffs, so I have at least another 7 years in me.

Searching for puffins in the distance

Me & Josey in front of the Cliffs of Moher

Peering over the edge

Me & Josey taking in the scenery

In addition to being one of the most visited tourist destinations in Ireland (and it’s no wonder why), the Cliffs of Moher have also made several significant film appearances, two of which really stand out in my mind. Firstly, they provided the perfect setting for the Cliffs of Insanity in the cult classic The Princess Bride, which was my absolute favourite film growing up— I actually got a plastic sword for my 8th birthday so I could reenact Inigo Montoya’s famous fight scene (“My name is Inigo Montoya. You killed my father. Prepare to die.”).

The Cliffs were also an important backdrop in Harry Potter and the Half-Blood Prince, where you can see a grey, turbulent coastline before Harry and Dumbledore enter a cave to retrieve one of Voldemort’s horcruxes. I wouldn’t normally make any fuss about film locations, but these happen to be two of my very favourite movies, so I just can’t help but get a bit excited over the fact that I am (a) standing on top of the Cliffs of Insanity and (b) only a stone’s throw away from one of the horcruxes. Let me have my moment.

Me & Josey admiring the Cliffs of Moher

Looking down at the Cliffs below

This grass gave me a leg rash, but it was worth it

The perfect spot for a photo in front of the cliffs

All too soon, we have to hop back on the bus and continue to our next destination along the Wild Atlantic Way: the Burren. This barren and somewhat desolate karst landscape is surprisingly home to nearly 75% of Ireland’s native plant species, a fact that I still struggle to wrap my head around considering just how, well, rocky this place is. Just like the Cliffs and the Giant’s Causeway up north, the Burren comes with its own 300 million year old geological history, but I’ll let you rock fanatics read about it on your own time (this site is simply overflowing with information, probably more than you ever needed to know, but enjoy).

Walking along the Burren

Exploring along the Wild Atlantic Way

A special visitor on our drive to the Burren

Driving from the Burren

Around 3pm, we arrive in Galway, our final stop for the day. This small but bustling town is said to be the cultural capital of Ireland, and our driver gives us many suggestions of what to do with our time here, although none better than simply wandering around and listening to the street buskers playing Irish music and popping into the charming shops that line the cobbled streets. We do, however, eagerly take her suggestion for food, making a beeline for The King’s Head pub and gobbling down a long overdue lunch (alongside several gin & tonics, because it is a holiday, after all).

As we slowly wander back through the colourful streets, we make one final stop at the amazing Murphy’s, which serves inventive flavours of ice cream made locally in Dingle. Because I can just never get enough, I choose a scoop of Dingle Gin ice cream alongside a scoop of Raspberry Sorbet, both of which are simply phenomenal. All the good bits of gin, with none of the blood alcohol content..

Every pub in this country has about 30 types of gin, so naturally I feel obligated to try them all.

Fast forward through a lot of napping and photo editing on the bus home, and we arrive back in Dublin around 9pm, ready to meet up with even more friends: Amelia, whom I went to high school with, plus her friend Mackenzie, and Kevin, a friend of Josey’s presumably also from high school. As with any good impromptu Seattle reunion, we head to the local gay bar for cocktails, bulk chats, and quite a bit of sweaty dancing. Pantibar proves successful on all fronts, and we leave around 1am, hot, tired, but very pleased with what has been another fantastic day in this amazing country.

GETTING OUTDOORS IN THE WICKLOW MOUNTAINS

Getting outdoors in the Wicklow Mountains