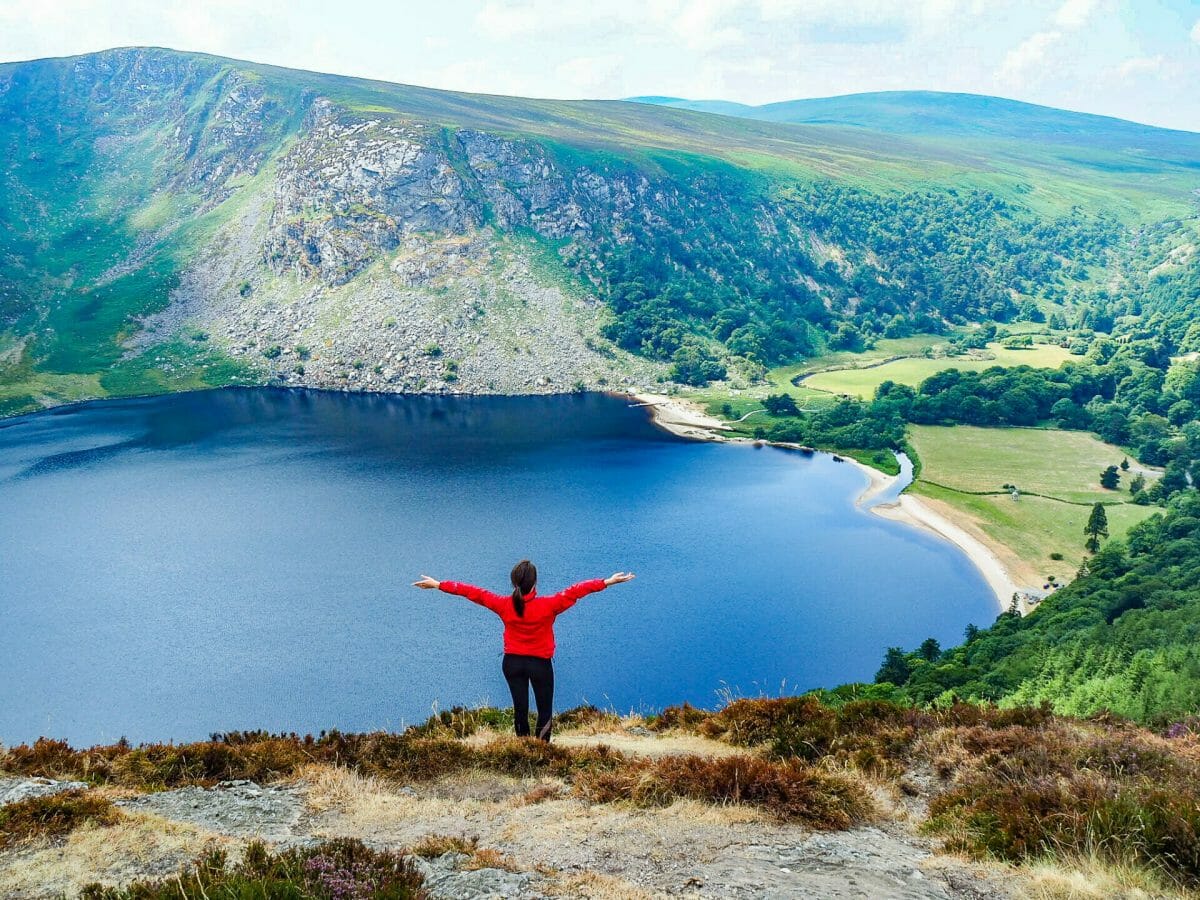 Getting outdoors in the Wicklow Mountains

I meet my friend Maryem in the hostel common room this morning for one last breakfast together before she joins her friends for the wedding and I go on my next adventure. Today: the Wicklow Mountains with Hilltop Treks! It’s a later start than my other two tours, so I have a relaxed stroll to the meeting point around 9.20am, although it’s easily 10am before we are driving out of Dublin with a full bus (thankfully only about 16 people). By midmorning, we make a stop at the Powerscourt Gardens, where some of the people are spending their afternoon, and then continue on towards the starting point for our walk.

Cost: Explore the Wicklow Mountains, Glendalough, and see some of the beautiful Irish countryside on a Hilltop Treks tour for €25. Add either a guided walk (€10) or a horse ride (€50), or just explore the Powerscourt Gardens. (I am not getting anything for linking to Hilltop Treks, I just thought this tour was a great way to explore outside of the city if you don’t want to hire a car!)

Getting there: Meet the Hilltop Treks van on O’Connell Street near the Gresham Hotel just after 9am, and then be driven around all day until your return at 6pm.

Where to stay: Abbey Court Hostel, just off O’Connell Street and about a 5min walk from the pick-up point, offers dorm beds ranging from €10-25.

Irish ponies in the distance

Wild Irish pony in the field

Enjoying the peace of the forest

Exactly how I imagined the Irish countryside would look

The remains of an old castle

Unlike the previous day where we were left to wander on our own at each stop, our guide leads the way on our walk, pointing out the remains of an ancient church, the significance of some Celtic symbols, but mostly just making sure we know where we are going as we pad through the countryside and into the forest. Over the course of our leisurely 2 hour stroll, we see about a dozen horses in picturesque meadows, wander by babbling creeks, and pass seas of green foliage before popping out in Enniskerry for lunch. Joining an older woman from Spain and a couple of forensic pathologists from LA, I dig into an amazing Shepherd’s Pie at Poppie’s, which is pricey but delicious.

Poppie’s restaurant just to the right

After lunch, we wander around town for a few minutes before regrouping and continuing further into the Wicklow Mountains, soon making a stop at the bridge made famous in the film PS. I Love You. Our driver makes no attempts to veil his disdain for the movie (mostly directed at Gerard Butler), recapping the bridge scene for those who haven’t seen it by saying that Hillary Swank is standing awkwardly on this very bridge as some Scotsman pretending to be an Irishman just happensto wander by so that she can ask “where is the Wicklow Mountains National Park?” and he can idiotically respond “you’re in it.” It’s been a lot of years since I’ve seen the film, but I’ve certainly been convinced never to watch it again by our guide, who believes that life is just too short to watch Gerard Butler do anything, least of all butcher the Irish accent.

Driving through the Irish countryside

Looking down into the valley

The famous PS I Love You Bridge

It’s actually quite a nice spot, an unpretentious bridge over a little creek that looks scenically down into a valley below, and I enjoy the opportunity to photograph more of the Irish countryside, hopping along the rocks trying to get the best angle. Not seeing any other visitors or even any passing cars our whole time at the bridge, it does feel incredibly far-fetched that Gerard Butler would happen to saunter by.. But believability aside, it’s still a worthwhile stop as far as I’m concerned.

Back in the bus for only a few minutes, we then come to what I believe to be the most beautiful stop of the entire day, Lough Tay or “the Guinness Lake”. Even on a sunny day, the lake is almost black due to silt and peat up-river, and is bordered on the top by a small sand bank, giving the lake an uncanny resemblance to a pint of Ireland’s beloved “Black Stuff”. The rolling hills and rocky mountains sitting all around the lake really make for an amazing scene, and I am once again blown away by the unassuming beauty of this country.

Lough Tay from the car

Enjoying the view over the Guinness Lake in County Wicklow

Reluctantly back on the road after taking about 100 photos of Lough Tay, we motor on towards our final stop, the little village of Glendalough, where we are given free time to wander around and explore. With my friends from lunch, I enjoy ice cream by the river before heading over to the town’s main attraction, the monastery. The impressive 30m tall Round Tower is surrounded by an aging cemetery, although clearly still in use according to some of the more recent dates on the headstones, and I stroll through en route to the nice forest path that will bring me by another section the river on the way back to the carpark. The view does not disappoint, and is as quintessentially Irish as anything we’ve yet seen—a wonderful final stop for the day.

The historic cemetery in Glendalough

Celtic cross atop a large headstone

The Round Tower rising 30m above Glendalough

An incredibly scenic spot for a cemetery

The Round Tower in the distance

By 5.30pm, we arrive in Dublin and I’m excitedly walking back to the hostel to meet up with my friend Josey, who arrived from London last night and has been working at her company’s Dublin office all day before spending the weekend with me. We catch up on the last 5 years over a wonderful pub dinner and talk long into the evening before wandering back to our room and turning in, eager for another long day of adventures tomorrow on the Wild Atlantic Way.

A riverfront view of Glendalough’s Round Tower

WILD ATLANTIC WAY: ADVENTURING FROM THE CLIFFS OF MOHER TO GALWAY CITY