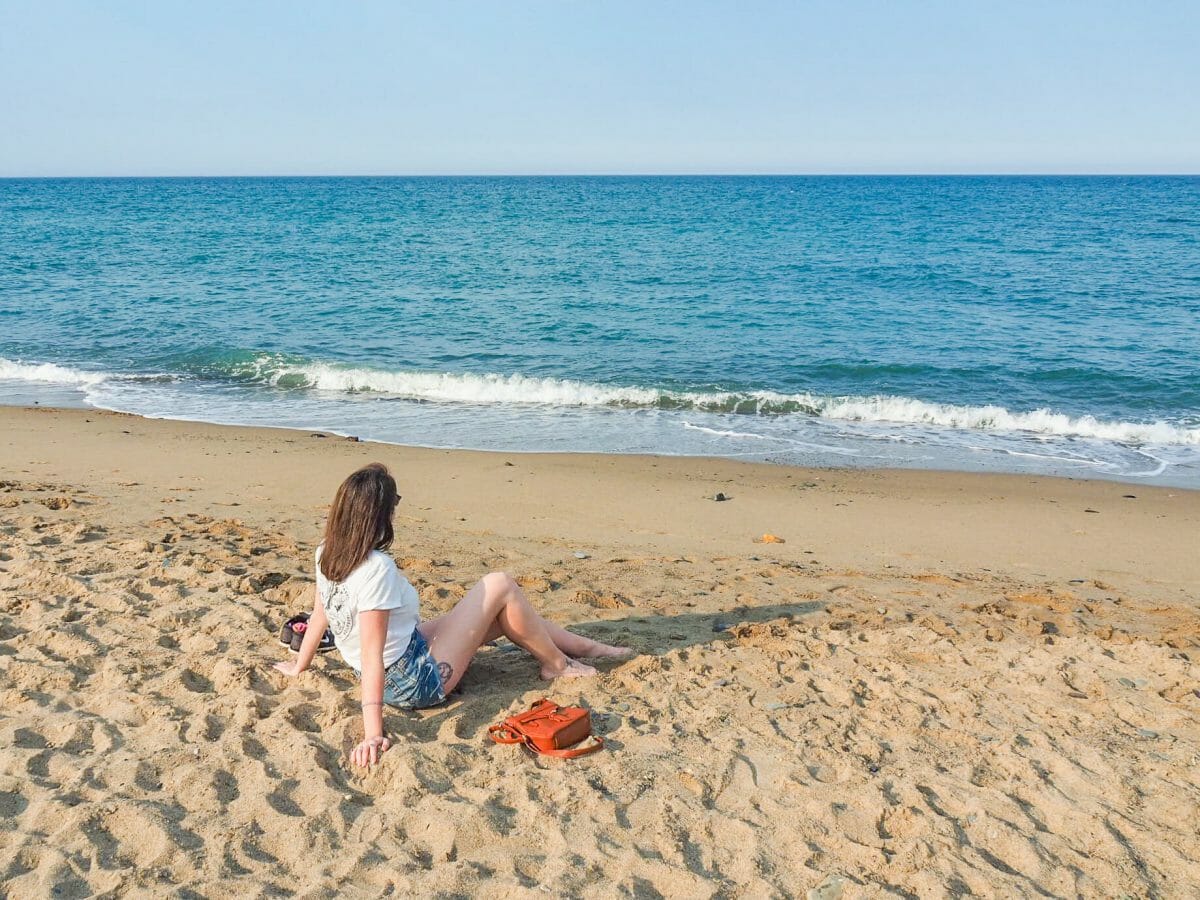 Coming off the back of a nearly 30 hour multi-plane journey from Sydney (we are honestly far from everything), I am ecstatic to finally arrive in Dublin. Even more so when I step out of the airport to blue skies, a glaring sun, and 28C weather. Ireland is apparently in the middle of a heat wave, and while it may not really qualify as a “heat wave” to me (the Australian version of a heat wave is 45C and you risk boiling alive every time you leave the house), it is far better weather than I ever imagined I’d find on the notoriously grey Emerald Isle. In fact, I packed 2 rain jackets, a jumper, and a wool coat in anticipation of Ireland’s “summer” weather. I’m now wishing I had thought to bring more shorts..

After a quick Uber ride to my hostel in the centre of Dublin, I drop my things in the storage room and join a free walking tour that is, very conveniently, departing out front in approximately 5 minutes. As I wait, I strike up conversation with Maryem, a doctor from London here for a friend’s wedding, who eagerly becomes my adventure partner over the next few days.

Looking up at the Chapel Royal

Statue of Fortitude at Dublin Castle

Snakes winding across the grass at Dubh Linn Gardens

Our walking tour takes us first to Dublin Castle, although only a very small section of the surprisingly ordinary brick building actually looks like a castle. As with all good castles, though, it is located at the city’s highest point (which really speaks to the lack of hills in Dublin) and does come with its own storied history. In an area formerly inhabited by Danish Vikings, the castle was built in the 13th century, partially burned down in the 17th, and remained the seat of English/British government in Ireland all the way up to the 20th, when Ireland gained independence. Our tour guide also tells us about the difficulties in building the Chapel Royal (the extremely castle-y bit that was added to the complex in the late 1800s), as the ground was so soft in this area of the city that two (very heavy) churches built entirely of stone sunk completely into the earth before someone thought, ok, perhaps we don’t need stone inside the church as well as outside, and the third iteration remained successfully above ground.

We then walk to nearby Dubh Linn Gardens, where our guide tells us about Ireland’s famous St. Patrick, who was apparently neither Irish (he was Welsh) nor a saint (he was never officially canonised), but did allegedly banish all the snakes from Ireland in an epic battle. The significance of this story is that, at the Gardens, two enormous stone snakes wind their way through the grass, seen from above as the Celtic symbol for “Welcome”. So apparently not all snakes were successfully banished from the island.

Next, we walk through Temple Bar, which is actually an area of town rather than an actual bar (although The Temple Bar is certainly one of Dublin’s most well-known venues). Its little laneways are dominated by charming pubs and colourful flowers, the streets are cobbled, and there’s an infectious bustle of international activity, particularly as the World Cup is playing in every restaurant and everyone in the country seems to be using it as an excuse to get blind drunk at midday and scream at the TV.

We are given some free time from the tour here, which Maryem and I happily seize upon to fast-walk towards a waffle shop she had eyed off the previous day and about which she has been telling me for the better part of the morning. I’m happy to report that our bubble waffles, topped with ice cream, Oreos, and peanut butter sauce, live up to every bit of Maryem’s hype, and then some.

Bustle of activity in Temple Bar

Waffle of my dreams

Strolling along the River Liffey, waffles long-since devoured, we continue with the group to the Ha’Penny Bridge, so-named for the half penny that used to be charged to cross. Now, there are dozens and dozens of bridges across the river, and our guide jokes that if we wanted to cross , we need only wait a few minutes and someone would come to build us a bridge sooner than we’d be able to go around.

Our final stop of the tour is Ireland’s oldest and most prestigious university, the beautiful Trinity College. We wander through an enormous door in the impressive façade and into the leafy courtyard, flanked on all sides by historical buildings, many of which are student accommodation, society headquarters, and dining. It’s free to explore the university yourself (having now left the free walking tour), but there is also a paid tour, led by students, that will provide further insight into the history of the College, as well as access to the university’s most impressive building, the Long Room Library.

The entrance to Trinity College

The area of campus referred to as Botany Bay

This library is most notable for housing the Book of Kells, an early Gaelic version of the bible, but it really isn’t what I want to see—I’m all about the library itself, which is home to hundreds of thousands of aging leather-bound tomes, arranged by weight on the dozens of shelves that line the long, two-story room. Maryem and I don’t visit the library today, eager to explore outdoors while the weather is so good, but I do make it back to the Long Room Library before my time in Dublin is over, and it is like stepping into Hogwarts. Pure magic.

Check out my photos of the Long Room Library: coming soon

After wandering around the university, Maryem and I make a beeline back to the hostel so I can check into my room, and then immediately leave again, walking to nearby Tara Street Station. On her flight, Maryem met a local woman who peppered her with recommendations, and we are taking one of the more exciting ones now—catching a train (the DART) to the seaside in nearby Bray.

On the beach in Bray

All the details: Bray

Getting there: Across the River Liffey and just a few blocks down from Temple Bar, catch the DART from Tara Street Station to Bray Station for €6.95 return. The journey is only about 20min and the scenery is amazing!

What to do: Hang out on the beach; if you’re really brave, go for a swim in the freezing water; walk along the coast to the next station south, Greystones; have dinner and drinks at one of the many oceanfront restaurants (check out Butler & Barry).

Top tips: Buy a Leap card for unlimited travel on the DART, Luas (tram network), and all of Dublin’s many buses for €10 (24hrs), €19.50 (3 days), or €40 (7 days). Buy your card at any Spar or Londis location, or hundreds of other news agency and off license shops throughout Ireland.

Within a few minutes, the scenery out the window has changed entirely from the historical buildings and city bustle that characterise Dublin to a surprisingly beautiful stretch of beach-y coastline, the likes of which I really hadn’t expected to see in Ireland (coastline, of course, but I never thought of Ireland as having beaches!). After just 20min on the DART, we arrive in Bray, a quaint seaside town with plenty of waterfront eateries. Maryem and I settle in to enjoy the view at Butler & Barry, an upscale restaurant with a gin list long enough to classify as a book, and finally have some long-overdue dinner.

Walking along the Bray seafront

Ireland stays light in the summer until nearly 11pm, so the hours easily slip by unnoticed as we enjoy our drinks and then settle onto the beach to enjoy the scenery at closer range. I loudly lament my lack of swimwear until I take a few steps into the ocean and realise, ok, it’s probably not warm enough to sustain human life, swimsuit or not. My seat on the sand suddenly seems a lot more inviting.

Before we know it, it’s approaching sunset, so we stroll along the beach towards the train station and then zip back to the city, exhausted from an amazing first day in Ireland but beyond excited for the adventures still to come.

Sunset over the Liffey River

GETTING OUTDOORS IN THE WICKLOW MOUNTAINS

WILD ATLANTIC WAY: ADVENTURING FROM THE CLIFFS OF MOHER TO GALWAY CITY