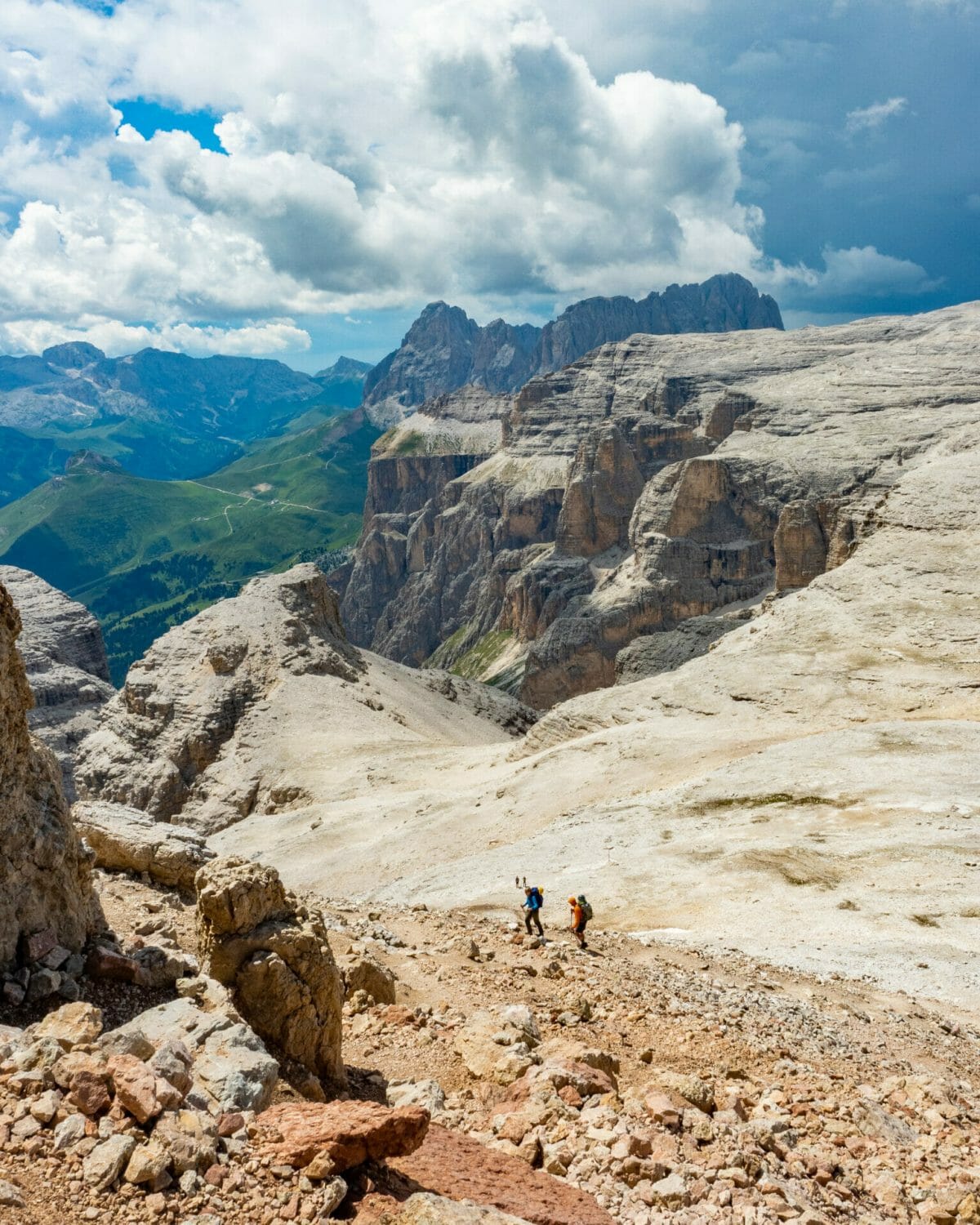 Following the traditional AV2 route, day 4 is very short and not terribly remarkable, but there’s a wonderful addition that might just change that— Piz Boè.

Rather than stopping  in the midst of the barren, lunar landscape of Rifugio Boè, ascend further to the summit of Boè and sleep among the stars at 3,152m. If you don’t climb Marmolada, this is the highest point of the entire route, replete with panoramic views and a rustic, sure-favourite hut!

This comprehensive guide to Day 4 of Alta Via 2 contains detailed section times, route recommendations, adventurous side trips, via ferrata, and heaps of insider tips— use it to plan your hike & then refer back on the trail so you always know what to expect!

For a complete Alta Via 2 planning guide, check out this post: LINK

After a quick drop to the lake shore just below Rifugio Pisciadú, ascend steeply up a rocky trail and connect within about 10min to an easy cable section (this is not an EEA route, so it’s up to you whether you’d like to gear up or not).

Within 30min, reach the flat plateau of Val di Tita and drop your pack for a quick side trip!

It took me about 20min to ascend to the summit and slightly longer to return back to my pack, given the loose terrain. Although our notes showed this as a via ferrata, there was no identifiable cable on the entire route, which was impeccably marked by the characteristic red and white painted rocks.

Looking across the valley at the little Campana Fassa hut perched improbably on the rounded summit of Piz Boè, it seems unlikely that you should arrive there within just a couple hours, but indeed you will!

Walking across the flat expanse of white rock and ascending the trail visible on the opposite mountainside, this next section is a pleasant mix of climbing and gentle downhill.

In just over an hour, arrive at Rifugio Boè and stop for lunch at this scenic hut in the shadow of Piz Boè. This is a new and very spacious hut, and also an option for accomodation if tiny Campana Fassa is booked!

From Rifugio Boè, ascend a steep hill for about 15min to reach a signed junction. With cables on either side of you, make sure to take the right path (noted as the “up route”) towards Piz Boè.

This route isn’t a true via ferrata and you’ll be off the cable within 5min, from which point you have a steep uphill climb on rocky terrain (about 15min) to the summit. In clear weather, tantalising views of The Queen of the Dolomites greet you across the moonscape, the iconic glaciated massif of Marmolada dominating for the next several days.

It’s unquestionably worth detouring off the main AV2 route to sleep at Campanna Piz Fassa, one of the highest huts in the entire Dolomites, situated at 3,152m on the summit of Piz Boè.

It should come as no surprise that a hut of this height sacrifices some ammenities— Campanna Piz Fassa is a small and rather rustic rifugio, but it more than makes up for it with stellar views, most notably of Marmolada and her sprawling glacier. Sunset and sunrise aren’t to be missed! Reserve Campanna Piz Fassa with a 20€ deposit.

*Via Ferrata Vallon (2B): there is also a via ferrata route accesible from Piz Boè, but due to a sudden afternoon hail storm, we were relegated inside to the dining area, so I can’t comment on it personally. If any readers manage it, please let me know what you think and I’ll add some info here!