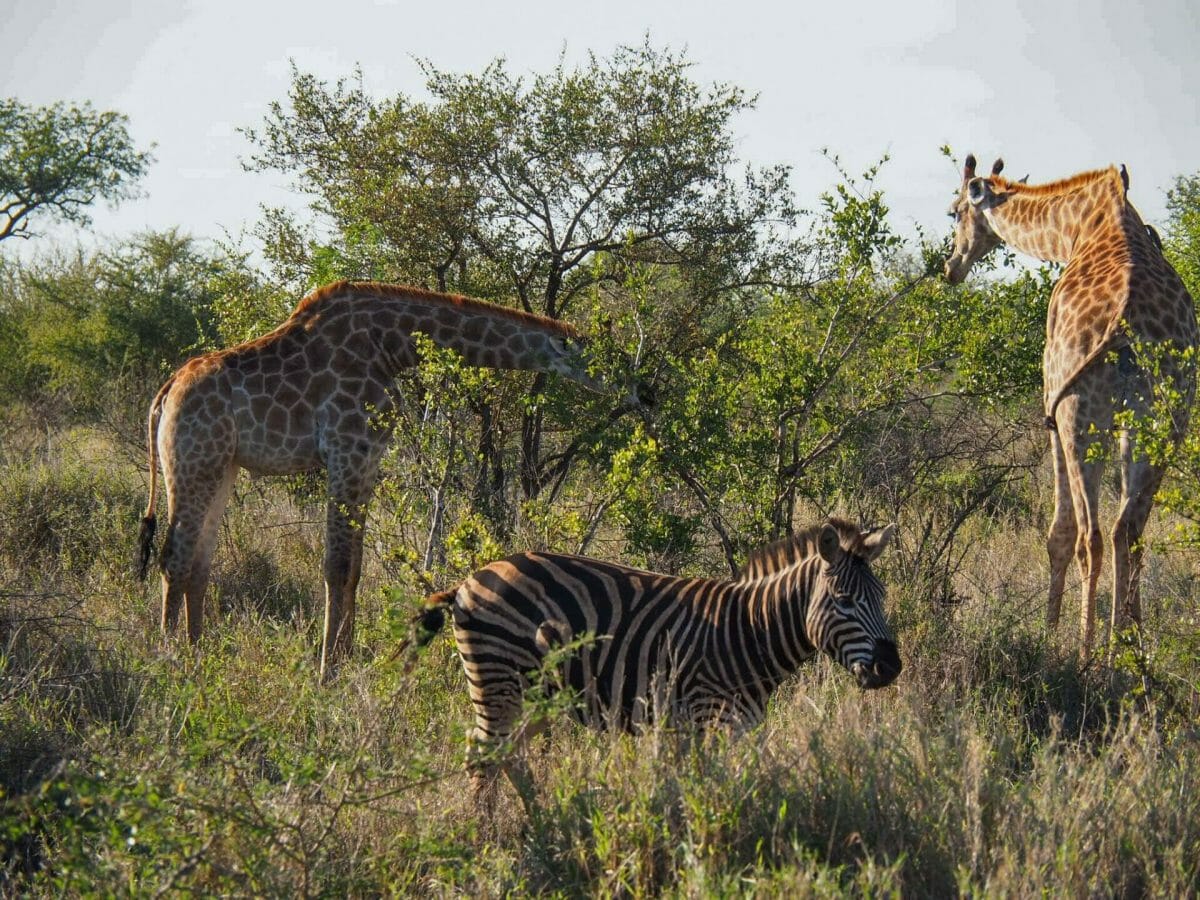 Our first full day of safari begins dark and early this morning as we wake up in our cute little thatched rondavel at Satara Rest Camp to a positively ungodly 4am alarm. I rush to get my camera bag and half a dozen water bottles ready, and then we hop into the car with our private guide Mary-Anne for our full day game drive. She sussed the sighting board last night and has decided that it will be best for us to head south if we want to see cats, so we set off towards Tshokwane. As our drive begins, Mary-Anne points out all the dirt and droppings on the road, commenting that buffalo must have come by. Not 30 seconds later, we see an entire herd on the opposite side of the road, ticking off the third of our Big Five (since we saw the rhino and elephants last night, and are still looking for the lion and leopard). That being said, I’m less concerned with the actual Big Five, and more concerned with just seeing big cats.

After our buffalo encounter, Mary-Anne takes us to see a baobab tree, actually South Africa’s oldest at 1,500 years old. Elephant are known for doing a thing called “ring-barking” to trees where they eat the bark off the trunk in a perfect ring, thus disrupting the flow of nutrients from the roots to the leaves (the transfer of these nutrients occurs in the cambium layer of the bark, so the removal actually kills the tree), but boabab trees are unique in their ability to regrow their bark and are therefore able to survive ring-barking.

After the botany lesson, we drive a dirt loop looking for cats, but manage to stumble across a massive herd of elephants instead. Two families are actually travelling together and we find ourselves sandwiched between them on the road, which gets a bit dicey when one of the elephants doesn’t like us there and starts charging and trumpeting. We can’t actually reverse because there are elephants behind us, so it requires some tricky manoeuvring on Mary-Anne’s part, and we are so happy to have her (for this single moment) because we would not have known what to do if we were driving ourselves.

After our very exciting elephant encounter, we stop for a quick rest at Tshokwane before continuing on towards Lower Sabie, still on the look out for kitties. On the way, we visit a viewpoint and see tiny dots moving about below us, which I discover to be zebra, giraffe, and ostriches when I squint through my camera lens. Despite a 35C forecast, it is chilly, overcast, and drizzling as we arrive in Lower Sabie for a delicious breakfast overlooking a river. While waiting for our eggs, we spot hippos and buffalo lurking about the shores, plus endure the endless identification of bird species in the vicinity by Mary-Anne.

After our late breakfast, we continue to Sunset Dam, where we photograph the African spoonbill and the yellow-billed stork near two hungry looking crocodiles, likely waiting for the birds to make one wrong move and become a light morning snack. Finally, some true excitement comes when Mary-Anne hears rumours of a leopard sighting and we manage to find said leopard nibbling its recent impala kill in a tree. The only bad news is that there are about two dozen cars all trying to spot the same animal, which is about two dozen more cars than we’ve seen in any one place on our entire drive through Kruger (obviously not including the car parks, but there have seriously been hardly any cars on the road). This is such a big deal for me, all I wanted was to see big cats, so I’m simply beside myself with happiness. We hang around for me to take several hundred photos and videos of the big cat, all while mum and I are noisily squealing, and then move along to allow other people through to admire the beautiful kitty and the unlucky impala.

After leaving the leopard and her many admirers, we head towards Skakuza, stopping for some bushbuck and elephants along the way. Once at the camp, Mary-Anne heads into the little shop to buy chicken sosaties (kebabs) and kudu sausages for our braai (bbq) this evening, and mum and I enjoy some popsicles while admiring a southern ground hornbill. These birds actually live to be 70 years old, but despite being sexually mature at 7 years old, they don’t mate until about 14 and only lay two eggs at a time. From these two eggs, the mother bird chooses a single egg to nurture, meaning a single baby bird to rear, so it’s not surprising that they are incredibly rare and at risk of being extinct. Other interesting bird facts from Mary-Anne: the southern ground hornbill’s beak is strong enough to break a tortoise shell and their Zulu nickname is “isingkleese”, which means “red coats”, a nod to the English who still wore red coats at the time of the Anglo-Zulu War of 1879.

En route back to our camp, we stop off at Tshokwane for a brief rest, during which time we pin our leopard up on the Sighting Board, and then continue on to see monkeys and baboons playing in the trees and on the side of the road. We cross another dam with buffalo and then come to a few cars on the side of the road who appear to be looking at something of significance. We pull alongside one car and ask what everyone is looking at: lions. Immediately, my camera is positioned out the window and I’m wildly scanning for movement. Sadly, I can’t actually see these lions. With Mary-Anne’s help, I finally do find them, but they are on the opposite side of the river so the photos are little more than cat-shaped blurs. Still, lions!

We arrive back to Satara in the evening, mum and I buy some wine at the little camp shop, and then Mary-Anne comes over to our rondavel to light the fire for our braai. The kudu and chicken is absolutely delicious, and we easily finish our wine, which makes falling asleep all the easier (although with a 4am wake up, we hardly need the help). Today was a phenomenal day for animal sightings, and we actually managed to tick off the Big Five, but I just won’t be satisfied until I see lions up close and personal, so I fall asleep hoping that tomorrow brings many kitties.