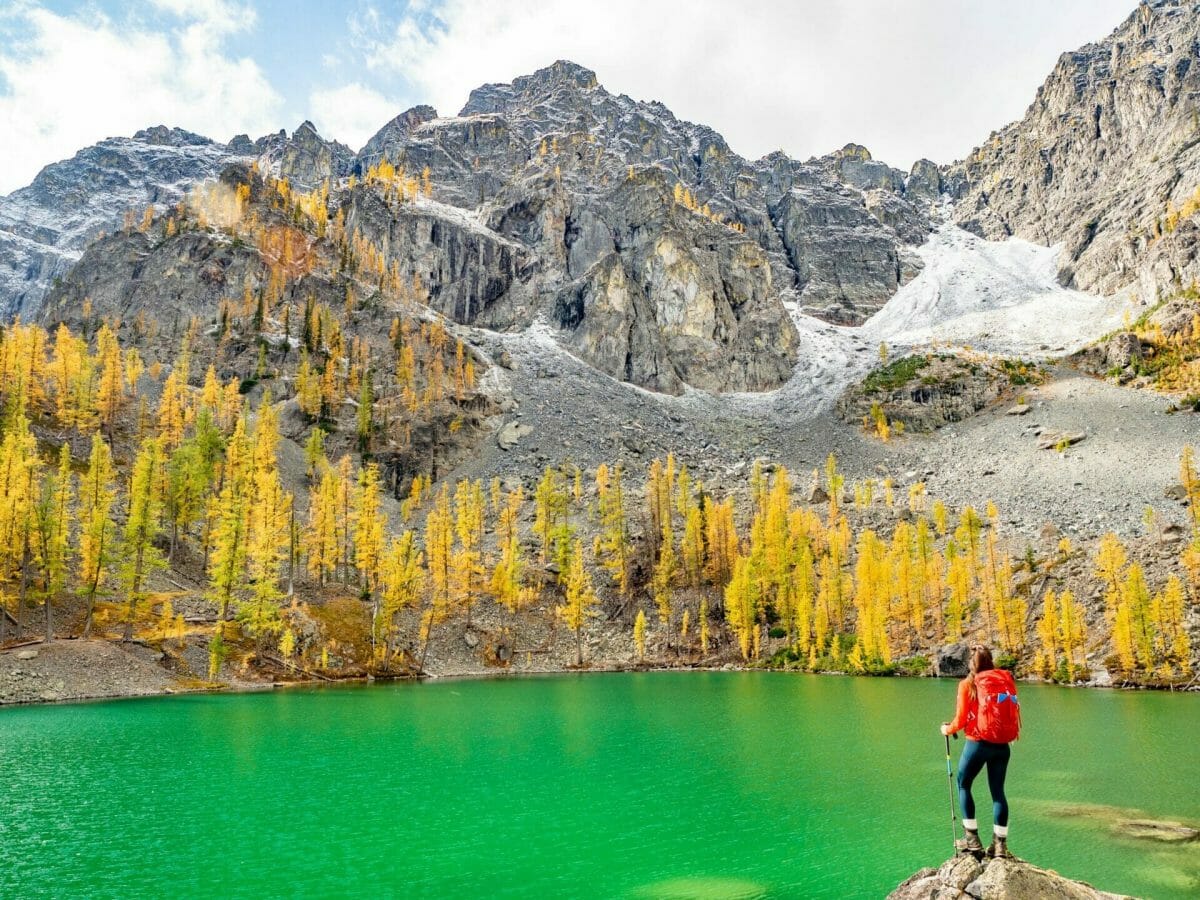 Located in the far northeast of Washington State, about 1hr from the Canadian border and just beyond North Cascades National Park, Pasayten Wilderness is a protected mecca of snow-capped alpine peaks and sparkling glacier lakes. Hoping to savour some of the vibrant autumn colours (and possibly even a few elusive golden larches) during my teaching break this week, I travelled up north with dad and Eileen to enjoy some trail time in both the NP and the Wilderness.

First up is Copper Glance Lake, so named for the old mine encountered early along the trail— it was a last minute choice that we hope will avoid the worst of the forecasted weather, but we’re not entirely sure what to expect, as none of us have been here before.

Despite the relentless uphill climb, it’s some of the finest scenery I’ve yet encountered in Washington, an explosion of yellows and reds perfectly contrasted against the green lake and snow-dusted panorama of peaks. And best of all, golden larch season is well and truly upon us!

ALL THE DETAILS: Copper Glance Lake

Drive about 45min from Winthrop (5hrs NE of Seattle, Washington)

Moderate, considering the 900m elevation gain to the lake, but still relatively short and reasonable for any fit hiker

There are a few creeks and streams en route to the lake where you’d be able to fill up water, but best to bring a filter just in case

With the promise of mid-morning rain hanging in the air, we drive about an hour from our hotel in Winthrop to reach the Copper Glance Lake trailhead at 9am. It’s a relatively short day-hike, but manages to cram 900m of elevation gain into only a few kilometres, so we set off with poles in hand, ready for a steep ascent.

The morning is partly cloudy— insanely cold when the wind blows off Sherman Glacier (apparently just a permanent snowfield now), but almost hot when the sun burns through breaks in the clouds. We stop to strip off layers on the way up, quickly getting back into our rhythm and hustling up the hillside to beat the impending precipitation.

Not far along the trail, we encounter the old Copper Glance mine, completely devoid of copper but lined with pyrite and an assortment of purple-orange rocks, and stop to poke around for a minute. From here, the ascent continues steadily through fire-charred forest, punctuated by the occasional bright red evergreen tree.

I’m totally blown away by the incredible colours, especially the trees that seem split down the middle in green and red— and then slightly discouraged to learn that it’s not autumn change but rust disease that causes these particular needles to change.

Thankfully, there are an ever-increasing number of healthy orange and yellow bushes as we trudge up the hill in the shadow of snow-covered Big Craggy Peak, as well as vibrant tundra and colourful ground cover lining the slopes.

By the time we finally crest over a little hump and Sherman Peak comes into full view in front of us, the trees are an explosion of autumn colours, the sun is in full swing, and you really couldn’t imagine a nicer place to spend a Saturday morning.

We run around the little meadow, photographing the scene from every angle, and at this time (despite the fresh dusting on the mountains above us) it seems truly impossible that snow was ever in the forecast.

The remainder of our hike to the lake is impossibly picturesque, more of Sherman Peak and Isabella Ridge appearing behind a white talus field with every step.

Together, we weave through the rocks and blaze a path down to the emerald Copper Glance Lake, whose shores are lined with golden larches already exploding in vibrant yellow needles. Our official golden larch trip (part of dad’s annual expedition to see the seasonal colour change on the larches in NE Washington) isn’t for another week, but clearly the larches are ready! And not having ever seen the phenomenon myself, I am suitably impressed.

For the uninitiated, there’s a magical 2-3 week period each autumn when the typically green alpine larch trees in eastern Washington turn a vibrant gold before dropping all of their needles and heading into winter. It’s the small geographical window, as well as the very narrow timeframe (and unpredictable weather this time of year), that makes golden larch season somewhat elusive and therefore incredibly captivating—if you know where to look and manage to time the season just right, it’s truly incredible to witness the deep green forests of the Cascades transition into an ethereal sea of gold.

We spend the next 1.5hrs hanging out on the chilly shores of Copper Glance Lake, photographing the kaleidoscope of fall colours as the sun does finally fade behind the clouds and little flakes of snow begin to fall, right on cue at noon.

The disappearance of the sun definitely changes the scenery (and requires us to bundle up in every layer we’ve brought), but the snow adds plenty of intrigue to our view, the high peaks around us growing whiter and slightly fuzzier as heavy winds whip little drops around their summits and down onto our heads.

We walk the long way around the lake to get back to the trail, taking in some fantastic views of Big Craggy from across the water, the yellow larches reflecting in the surface of the glassy lake. It’s my first snow of the year and, save for one little snow flurry in Peru last August, the first snowfall I’ve seen since my last time in Washington 4 years ago.

Finally back to the (faint) trail cutting through the talus field, we ascend a short distance up from the lake and begin the long descent back to the trailhead. We’re still rugged up beneath multiple layers of puffy jackets and mittens as the snow swirls around, and although I don’t really like the cold, there’s something undeniably magical about our snowy afternoon.

Descending in earnest, however, proves less fun, with an unrelenting 1hr decline that leaves all of our knees aching and practically swelling in front of our eyes.

The somewhat miserable return is improved by a passing woman on the trail who recognises dad from his mountaineering blog and stops to chat about a surprising number of mutual friends and similar climbing accomplishments. It’s dad’s first true celebrity spotting and it leaves all of us feeling a bit giddy. He’s been writing trip reports since I was an infant, but my stepmum has been working hard to catalogue his old work onto a digital site, prompted by my insistence that this was the best way to share all of his many adventures with the masses.

Buoyed by the chance encounter with a fan, the entire family motors along the remaining section of trail, finally groaning into the trailhead at 230pm with stiff joints, wet hair, and large grins. We couldn’t have timed our trip any better to enjoy the sun this morning, and there’s a definite satisfaction in feeling like we stumbled across something special out here in the Pasayten Wilderness today.