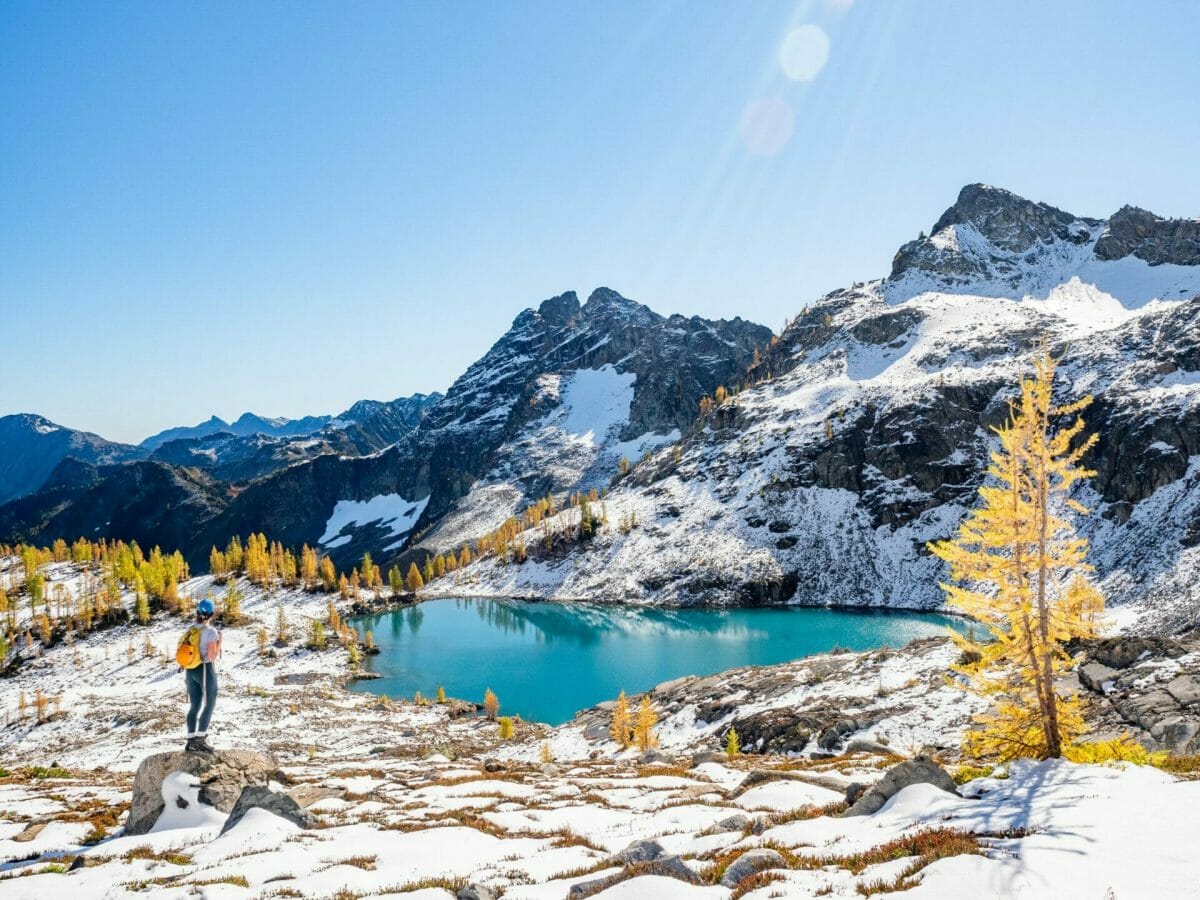 Following a spectacular day along the Maple Pass Loop trail yesterday, we’ve left the crowds behind to trek towards (and hopefully summit) Black Peak today, a task whose difficulty is somewhat magnified by the recent snowfall. We are rewarded for our efforts with an almost unbelievable pocket of good weather, though, and the combination of white slopes, blue skies, and golden larches backlight by the morning sun is mind-blowing.

We make an incredibly late start to the day, puttering around camp and enjoying a slow breakfast before finally rolling out around 945am. The trail leads down and around the lake on the right shore, all the while offering incredible views of our ultimate goal, Black Peak.

In contrast to yesterday’s bitter cold and intermittent cloud cover, the morning is already warm, the sun unobstructed by even a single cloud as it seers down on the valley. Not only are these far more pleasant hiking conditions, but the sun is also melting the snow on Black Peak, making the summit more and more attainable with each passing minute.

Continuing upwards from the silty green shore of little Lewis Lake, we cut through talus fields and between golden larches en route to upper Wing Lake. It takes us 90min from camp, but only because I’m stopping every two minutes for a photo.

With fresh snow covering most of the landscape and a clear blue sky burning overhead, you couldn’t imagine a more magical setting. Coupled with the season’s first larch trees, it’s quite literally staggering.

Naturally, I have a quick splash in Wing Lake, unable to pass up the sparkling blue water and its powdered sugar backdrop. If not for our summit plans, I could easily spend several hours swimming around and relaxing in the sun, but alas, we have peaks to bag and I eventually have to pull myself out of the water to continue upwards.

Dominating our view all morning is Black Peak— even as we near the base, it still seems impossibly far and way too technical, so I struggle to imagine us on the summit. Dad shares some of these concerns, having made both of his previous two summits of Black under clear (or at least less snowy) conditions.

We aren’t totally sure what we’ll find at the top in terms of snow or ice, but we’re aiming to get as high as possible, even if it’s only the ridge. And yet, I’m not sure any of us will really be satisfied without a summit today..

After frolicking around the shores of Wing Lake for so long that Eileen leaves to blaze her way up the hillside alone, dad and I finally follow through the snow-covered scree. It’s a steady, sharp ascent all the way to the peak, so I’m grateful to have just a small summit pack (as well as poles, without which I probably would have broken a leg long ago).

With every few steps, I wheel around and stare back at the incredible Wing Lake and its snowy, larch-covered shore below, my jaw dropping each time, even though I already know what’s below. By the time we reach the Ridge around 1pm, I’m ready to say this is one of the best views I’ve ever seen in my life.

Stretched out below is the most insane contrast of colours and textures, all ringed by high snowy peaks of the North Cascades, Picketts, and Sawtooth Mountains. From this vantage point, we can even see Mt Baker and Glacier Peak rising above the surrounding mountains.

Mt Goode is another star of the show, its jagged face positioned right in front of us, and several of the peaks we admired on our drive over Washington Pass also make an appearance. One of my favourites among these is Silver Star, a dramatic, ribbed peak that is instantly recognisable to our left— but there are genuinely so many incredible mountains that it’s difficult to focus attention on any single point for longer than a few moments.

To say that I’m overwhelmed by the panorama of peaks would be an understatement, and it’s a genuine challenge to tear myself away from the view and continue upwards. Fear of descending in the dark proves an excellent motivator.

The snow has become even deeper at these heights, and although sometimes I’m thankful (it does trap falling rocks and cushion slips very nicely), it also makes it a bit more challenging to find our route up the west face.

Finally, just 30m below the summit, we pull out the panic rope and ascend the final distance upwards (I would happily have done it without a rope, which is probably more an indication of my inexperience and over-confidence than actual skill).

It takes a total of 2hrs from the Ridge to actually reach the summit via a small slot on the east side of the peak, but it’s instantly worth every breathless steps (and the 2cm or water sloshing around in my saturated boots from snow melt). There is a true 360 of peaks surrounding us, with layers and layers of mountains fading into the distance in every direction. Best of all, there’s not another soul in sight.

After clambering onto the true summit, we all take a brief rest at 2,734m and marvel at, not only our unbelievable views, but the impossibly perfect conditions that have aligned as if by design for our backpacking trip.

We milk every possible second out of our summit, but are eventually forced to begin the descent in the interest of time. It’s around 330 when we make our first steps off the summit, using the panic rope as a handline to downclimb two separate sections of slippery rock until we get to slightly flatter ground.

As always, the route down proves far more challenging than the route up and we struggle to even locate any of our boot prints after so much of the snow has melted. We pass the time chattering excitedly about our day and discussing plans for tomorrow, specifically the hike out to Heather Pass and the final 3.5km of the Maple Pass Loop we need to complete.

In no time at all, we’re back at the ridge and then, shortly after, skiing down the thawed scree slopes towards Wing Lake. Despite enormous strain on the joints and general tiredness of the group, we make great time and find ourselves all the way back at camp just 4hrs after leaving the summit.

It’s moments away from dark when we finally stomp through, but with our tents still set up from the previous night, I wouldn’t have traded a single minute on Black Peak. We enjoy dinner and wine in the dark, exhausted by beaming from a day well spent in the mountains.

By the next morning, another crisp sunny day with impeccable visibility, we only have to traverse the talus slope back up to Heather Pass (an easy 1hr once we find a nice low path clearly marked by cairns that we somehow missed on the way out) and then descend the final 3.5km back to the carpark on an easy downhill trail. Dad even lets me carry the rope so that passing hikers will be able to identify me as a *true mountaineer*.

We racked up 25.5km and 1870m of elevation gain on this 3-day backpacking trip, including our Black Peak summit. I missed a 2km section on the recording, but otherwise this is the exact route we followed: