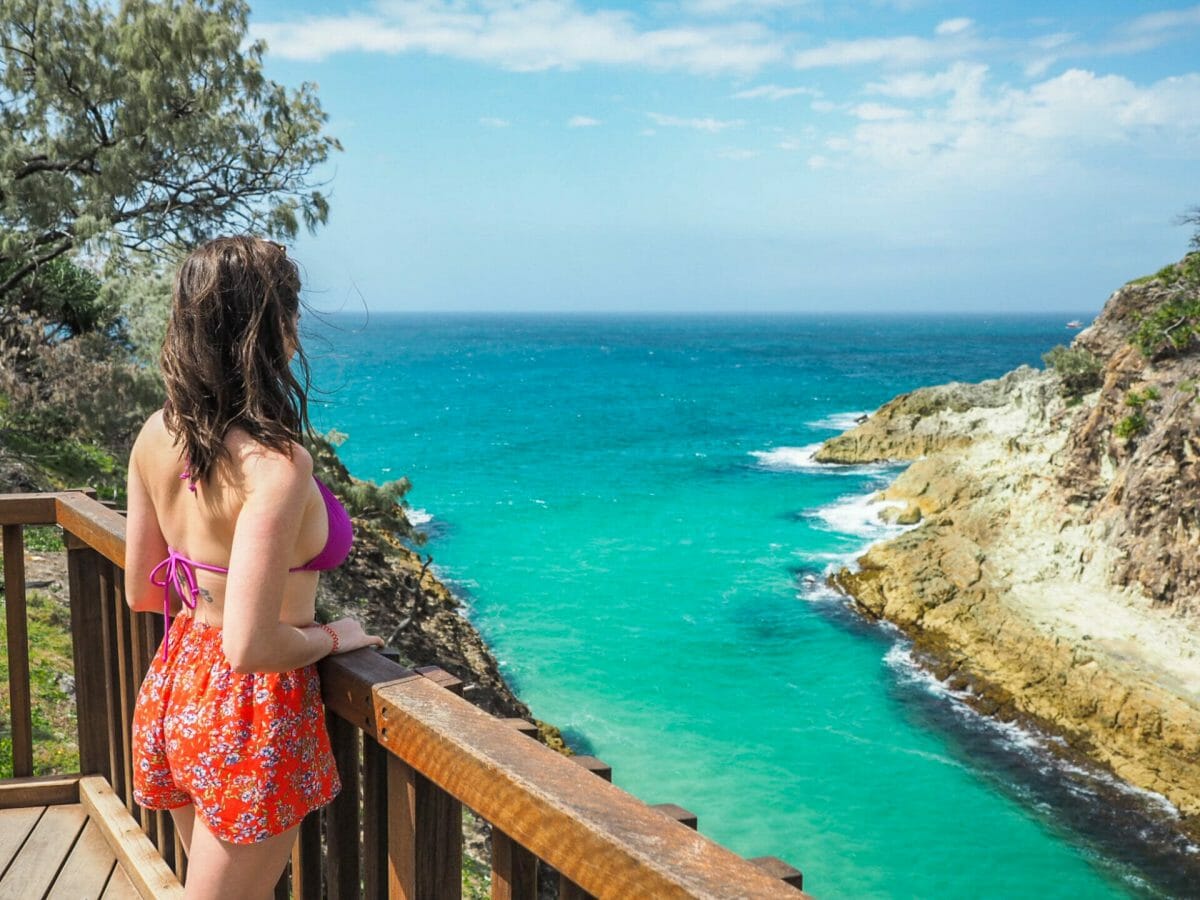 After a big weekend of research and work on the Gold Coast, Diana and I are back on the road for another few days of adventure! Before we finally turn around to start the long slog back to Sydney tomorrow, we have to travel north just one hour to Brisbane to complete our Legendary Pacific Coast road trip, but instead of spending a day in the city, we’ve opted for an excursion to the ruggedly beautiful North Stradbroke Island just off the coast. Neither of us have ever been to Straddie, but one look at the official instagram account and we are thoroughly convinced that it’s going to be another highlight.

Enjoying the view over Main Beach

As has become our routine, Diana and I are up early for our hour-long drive from Runaway Bay to Cleveland, where we’ll be catching the passenger ferry across to Dunwich. The drive itself is uneventful (and the parking is somewhat distressing), but we are brimming with excitement as we walk into the office to buy our water taxi tickets. At only $7 each way, it’s considerably cheeper than the vehicle ferry we were first looking into and just another reason we are feeling quite pleased with ourselves this morning.

We depart the mainland just before 9am and cruise across moderately windy waters for about 20min to reach North Stradbroke Island (Straddie, as the locals call it), where a public bus is waiting to take us across the island to Point Lookout. Although it may have been nice to have the flexibility of our own car, it’s undeniably convenient to just hop on the $5 bus and watch the scenery whiz by outside as we approach the northeastern tip of the little island, not a worry in the world.

If our arrival in Dunwich was somewhat ordinary, what we find in Point Lookout is like something out of a postcard: the sun is shining over crystal clear water in a million shades of blue, white sand beaches extend into the distance, dramatic rocks frame the landscape, and still there are hardly any people around. Diana likens it to the Mediterranean (if the Mediterranean was Europe’s best kept secret), but fortunately we have it nearly all to ourselves in Australia.

Our first view of Main Beach

One of the best-loved activities on Straddie is the 1.5km Gorge Walk that runs along the coastline from Point Lookout, so naturally I’ve decided to make it our number one priority and official first stop on the island. The public bus drops us off right near the start of the loop-like trail (it finishes near the starting point, but isn’t really a true loop), and after plenty of gasping and manic giggling at Main Beach, we are strolling along the boardwalk, surrounded by even more stunning scenery.

Although the walk is rather short, we easily spend the better part of the morning exploring the hidden beaches, aquamarine viewpoints, and dramatic coastline, all while watching for marine life below (amazingly, we spot a turtle soaring through the water from one of the lookouts!). Every step is an incredible photo opportunity, so it really is no surprise that I am moving along at snail pace, but at least Diana is equally consumed by our surroundings and happy to wait for me to sprint onto various rock ledges to find a better angle.

On the lookout for whales below

Checking out the beaches below

Just one of Straddie’s infinite beaches

Just as we are nearing the end of the walk, the wind that’s been lightly blowing all day approaches gail force, rattling the screw palms and threatening to topple us right over the edge of the cliffs. It’s definitely not ideal weather for spotting aquatic life, but it’s the large grey cloud looming in the distance that really encourages us to stop for lunch in Point Lookout rather than catching the bus to nearby Cylinder Beach. We are pretty pleased with our timing to have gotten blue skies for our entire North Gorge Walk, but still, we hope that the new cloud cover will quickly burn off so we can return to drooling over the scenery as soon as possible.

Over crepes/lunch wraps at French Ease, a beautiful cafe above (what else) Frenchman’s Beach, Diana and I discuss plans for the rest of our day on Straddie. Although the public bus was so easy this morning and made me question why I ever considered bringing the car, we are somewhat frustrated by the infrequent afternoon bus times between Point Lookout and Amity Point, the other main area of the island that we are hoping to explore: either we can catch a bus in 30min or we’ll be waiting 2.5hrs for our next lift. Ultimately, we make the call to wrap up our time in Point Lookout, quickly squeezing in a few more beaches before heading to the bus stop and crossing our fingers that we find all the dolphins and koalas we’ve been reading about (spoiler alert: we do).

Me and Diana enjoying the amazing scenery at Point Lookout

Looking down at the turtles below

Enjoying the beach at Amity Point

Our bus from Point Lookout drops us at an interchange seemingly in the middle of nowhere, but thankfully a little minibus is not far behind to take us the rest of the way to Amity Point. Just before we arrive, our driver gives us a few helpful tips, pointing us towards the jetty for wild dolphins and towards the campsite for wild koalas, animals being the likely reason why most of us find ourselves on the quieter side of the island in the first place. We may have lost the dramatic cliffs and Mediterranean scenery as we moved to Straddie’s northwestern tip, but the water is calm, the beaches are an incredible shade of orange, the storm clouds have completely passed, and the animals are out in full force.

Disembarking from the minibus, Diana and I head immediately to the jetty to look out for dolphins, but we don’t even make it to the end of the short walkway before we see a few sleek, silver bodies darting around. I’m absolutely amazed by how close the dolphins will swim to our legs as we dangle excitedly over the edge; apparently as interested in us as we are in them, they swim laps around the jetty, returning again and again to splash around right in front of us and the solitary fisherman to our left.

Me and Diana watching the dolphins swim by

Dolphins passing right by the jetty

Having ticked dolphins off our growing list of wild animals to spot, we wander towards Minjerribah Campsite in search of koalas that are apparently rather common in the gums here. Both with far better eyesight and much greater patience, Diana leads our search for the koalas, but eventually we decide to take a break and enjoy the swim we’ve been longing for all day (it’s impossible to stare at such brilliantly blue water and not get in). My one regret is that we don’t get to camp in the unbelievable beachfront sites, but I promise myself that I’ll be back!

After some time in the water, Diana and I wander slowly back towards the jetty, scanning the trees for any grey lumps as we go, hoping that a snoozing koala will be just above us. Unfortunately, we make it all the way to the jetty without seeing any marsupials, but the pod of dolphins playing just in front of us more than makes up for it. Without even paying attention to the time, nearly two hours go by as we sit and enjoy the views, watching the dolphins perform at our feet and occasionally getting up to run frantically to the other side of the dock for a video of our new bottle-nosed friends (see video above). By the time we do check our watches, we have to head back for the bus, but we are absolutely glowing with happiness over what we’ve just seen. And, as if today could get any better, Diana finally finds a wild koala for us just 50m from the bus stop, hanging out in a mid-level branches of a gum tree on the side of the road.

Our entire journey back to Runaway Bay— the bus to Point Lookout and then back to Dunwich, the ferry to Cleveland, the drive home— is spent reliving our favourite memories of the day, radiating the kind of happiness that only comes from something truly incredible like wild dolphins, wild koalas, or even just stunning natural scenery. For a place that we just heard of yesterday, Straddie is already somewhere that’s totally stolen both of our hearts, and is unlikely to be somewhere we will quickly forget.

Wild koala sleeping in the trees

A perfect day at Amity Point

Koala camouflaged in the trees above

What to do in Tasmania: 30 amazing adventures on Australia’s island state