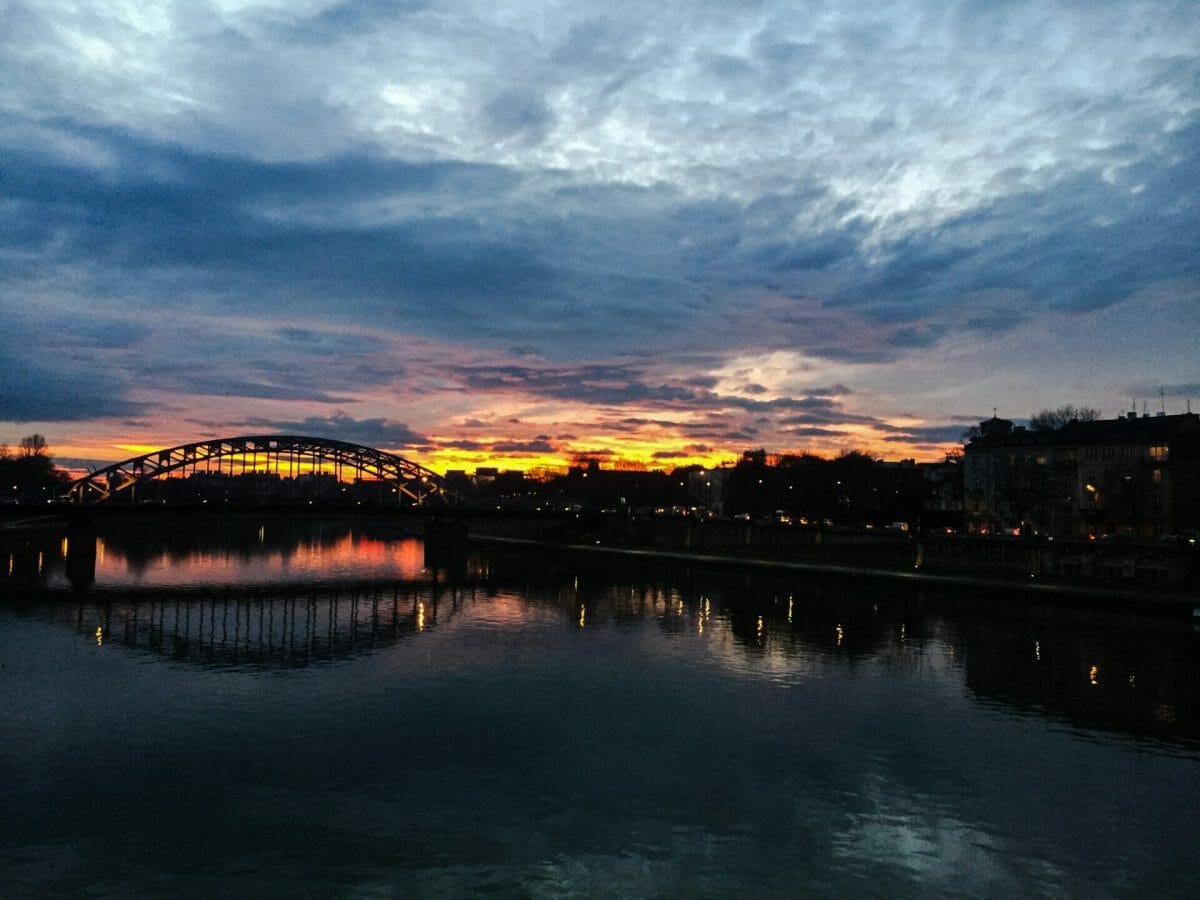 Kraków has the reputation of being a beautiful city, and while we probably didn’t catch it at its best due to the grey, rainy weather this week, we still thoroughly enjoyed wandering through the lively Rynek Glówny and admiring the beautiful St. Mary’s Basilica. More than the beautiful city square, though, we came to Kraków to immerse ourselves in the horrifying events that took place nearby in WWII. Visiting these dark and depressing Holocaust sites in person might seem totally incongruous with a fun European holiday, but I also feel that it’s incredibly important for future generations to recognise the incomprehensible cruelty that took place throughout the region in Nazi concentration camps. There is truly no better way to appreciate these atrocities than by visiting Auschwitz in person, and although the experience will likely weigh heavy on your heart for the rest of your life, it also serves as an invaluable reminder of what can follow racial and religious discrimination.

All the details: Auschwitz-Birkenau Concentration Camp

Cost: It is free to visit Auschwitz and read the many plaques throughout the camp on your own.

Getting there: From Kraków Główny bus station, catch a 90min service to Oświęcim for 17zł. Buses run regularly throughout the day in both directions and there are plenty of people travelling on this route every single day, so it’s easy to ask for directions.

Top tips: Even though it is free to visit the camp, I strongly recommend paying for a guided tour, as you’ll get so much more out of the experience. Tours run frequently throughout the day in several languages for 47zł.

Our first day in Kraków, arriving at 7am on an overnight train from Budapest, we check our backpacks into lockers at the train station and hop immediately on a bus at the adjoining bus station bound for Oświęcim, the Polish name for the town renamed Auschwitz by the Nazis. The buses run fairly constantly from Kraków Główny (the bus station is right outside the train station); the ride is about 90 minutes and costs only 17zł (5 AUD).

The bus brings us right to the museum, which is surprisingly crowded for an early November morning. The staff remark that this is unusual, we’ve just been unlucky that a number of school groups have chosen the same day to visit. Entrance to the museum is free, which is how we first enter and explore some of the camp. However, I get quickly frustrated with the number of people and feel like I’m not really getting anything out of the experience, so we go back to the front and pay for a guided tour. It’s about 47zł each and so incredibly worthwhile, I would never recommend you to go without the tour, but I love that they are trying to make the camp accessible to everyone by offering free admission. It’s a place everyone needs to see in their lifetime.

I doubt I can say anything too thought-provoking about Auschwitz that hasn’t already been better said, but I just want to describe our visit a bit. It’s a haunting experience, but so necessary that people not forget what happened here only 70 years ago.

Our tour lasts several hours and winds us first through Auschwitz I, which held about 20,000 prisoners at a time and is home to the famous gate inscription “work will set you free”, and then takes us on a shuttle bus 3km away to Birkenau (Auschwitz II), which held 100,000 prisoners at a time and was the primary extermination camp. Auschwitz I has been set up as a museum, with exhibits in the barracks and around the grounds that detail who came through the camp, the conditions they lived in, how they were “selected” to either work or be gassed.

One exhibit shows a collection of official Nazi records that include why a certain person was sent to Auschwitz: listening to foreign radio, smuggling food into a Jewish ghetto, etc. The museum is superb and the things we see there make it possible to at least try to comprehend what went on in the camps. The thousand of pounds of human hair, the photos of smoke billowing out of the chimneys as prisoners burned, the barracks kept in original condition, even the cold weather helps us understand just a little more what these people suffered—while we are bundled in layers and layers, with boots and hats and scarves, yet still shivering, prisoners here were given only thin pyjamas.

When we shuttle over to Birkenau, there aren’t any exhibits, so it is even more valuable to have the guide. She shows us the train tracks that would bring prisoners in by the thousands, right into the camp. Many of the people on these trains even paid for their own train tickets— that is the level of delusion around what happened at these camps. Once off the train, SS officers, and often Dr. Mengele, would sort people into groups: fit to work, immediately to the gas chambers, or for experimentation. Those fit to work would march to Auschwitz I, while many women, babies, and the elderly were told they would be showering. Women weren’t separated from their young children and the gas chambers were fit with fake shower heads, both of these measures to minimise panic and prevent resistance until it was too late.

The 4 crematoria at Birkenau worked 24 hours a day and were manned by prisoners, feeding the dead slowly into ovens, struggling to keep up with the bodies that piled up. I read an interesting book the day after our visit about twins and other “abnormal” people that were the subjects of experiments at Auschwitz by the doctor, and although it spared them from the gas chambers, it was perhaps the worst group of all to be selected for. These people were tortured, sometimes for years, at the hands of Dr. Mangele, all in the name of “science”.

A lot of the camp was destroyed by the Nazis when they sensed they had lost the war—records shredded, gas chambers exploded, wooden barracks burned—yet many prisoners were marched on to camps in Germany and weren’t liberated until months after Auschwitz, as was the case with Elie Wiesel, author of the well-known book Night (which I’d really recommend reading before your visit).

We see the remnants of the crematoria and satellite images that were taken to prove the camp’s existence to the outside world (despite the Nazi’s best efforts to keep the horrors of these camps secret), as well as many intact barracks in far sadder condition than those at Auschwitz I. We also get to see the memorial erected for the victims and our guide tells us that last year, for the 70th anniversary of the camp’s liberation, over 300 survivors gathered at the memorial.

I thought it was amazing that the survivors were mentally and emotionally strong enough to return to this place, but our guide also tells us that the museum here opened in 1947 and tours were originally led by the survivors themselves. I can’t express how much that information inspired me. It’s a true testament to human resilience that people were able to come back to this place only 2 years later and share their stories of incredible suffering, but that’s how important they believed it was for the world to see what happened here. And it remains just as important.

I always try to read about each place I’m visiting on a trip, particularly those of great or terrible significance, just to make the history feel all the more real. Unsurprisingly, there are a mountain of books and movies about the Holocaust, and there’s some I would specifically recommend to anyone wanting to visit Auschwitz (or even those who haven’t yet had the chance to visit).

Probably one of the most important books ever written, this memoir recalls Elie Wiesel’s time in Auschwitz as a young boy, the sole survivor of his whole family. The descriptions in this book will quite literally haunt you, but will also make you feel the horrors of the concentration camp on a more personal level. This is a short book, so even bring it along on the bus ride from Kraków and you’ll be able to finish a majority of it.

This is a really great piece of fiction about the young son of a high-ranking Nazi official who relocates from Berlin to Poland, right next to Auschwitz, so his father can oversee killing there. Obviously the boy has no idea what his father does, as he doesn’t understand the concept of systematic extermination, and he makes friends with a boy on the other side of the fence who he believes is wearing striped pyjamas and a number as part of a game. Be prepared to cry excessively. Although not a true story, this book (and movie) does a pretty spectacular job of capturing the Holocaust through innocent eyes, which only serves to highlight the true horrors of what is actually taking place.

This is another fictional novel about a set of twins who were experimented on by Dr. Mengele at Auschwitz. It draws a lot of information from historical records and survivor accounts to examine the unique few who were involved in sinister “medical” experiments at the hands of the Nazis.

One of the primary references used to write Mischling, this book compiles true accounts from survivors of Dr. Mengele’s experiments and his own biography, and is so disturbing you’ll want to vomit. Nonetheless, it’s a horribly important piece of history and a really interesting book.

The next day in Kraków, we join a free walking tour of the Jewish Quarter, Kazimierz, which also proves incredibly interesting. Kazimierz has history dating back nearly a thousand years and was an independent city from Kraków for some time starting in the 1300s. When Austria invaded Poland in the 1700s, it was incorporated as a district of Kraków and now remains that way.

The quarter historically housed a lot of Jews and a portion became a Jewish ghetto during WWII. The tour walks us by a memorial that commemorates the 65,000 Jews from Kazimierz that were killed, leaving only 3,000 remaining, and explains that many Jewish people visit this memorial and leave stones rather than flowers to symbolise eternal remembrance, which I find so beautiful and symbolic.

We get to see a number of historically significant places on the 2 hour walk (and also some from Schindler’s List, which was filmed here) and I really recommend visiting this area, as it is an important piece of history that perfectly accompanies much of what we learned at Auschwitz.

Read more about our Poland adventures

COUNTING DOWN TO CHRISTMAS IN WROCŁAW, POLAND

PLANNING A TRIP TO POLAND

Autumn in the City of Lights: the best Paris experiences