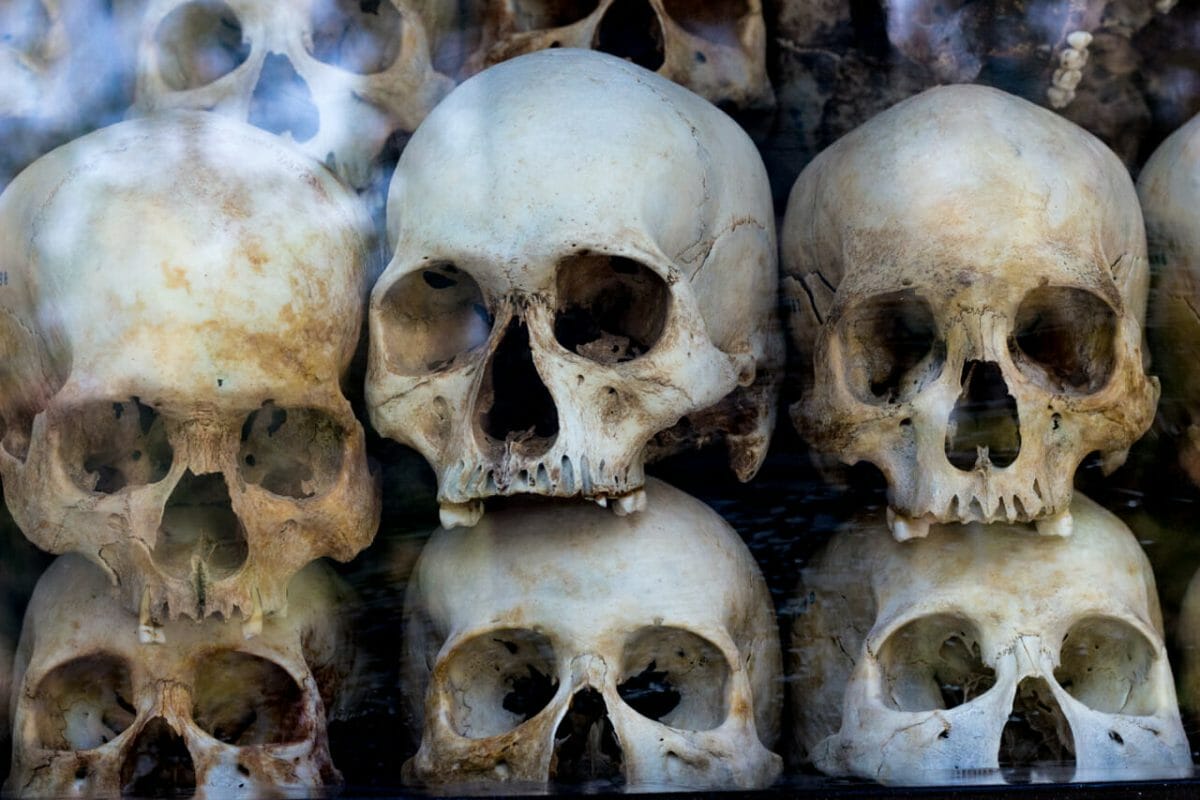 Although it is a somewhat depressing way to begin our time in Cambodia, it feels necessary to spend a little time learning about the genocide that happened here 35 years ago. What’s really shocking is how little Aristo and I know about it. I don’t think that’s a personal failure– it seems like neither one of us learned much about it in school. It’s terrifying to think how recently all this took place and how little it’s being talked about.

So, upon the recommendation of some friends who visited Cambodia last year, we arrive in the capital of Phnom Penh and set off to explore two very important historical sites related to the genocide: Tuol Sleng Genocide Museum and the Killing Fields.

All the details: Tuol Sleng Genocide Museum & The Killing Fields

Cost: Entry to Tuol Sleng Genocide Museum is $3.50, while entry to the Killing Fields is $5, including an English audio tour. Both tickets can be purchased on arrival.

Getting there: Take a tuk tuk from the centre of Phnom Penh to Tuol Seng Genocide Museum for $2. The Killing Fields, on the other hand, are about 15km out of town, so a tuk tuk will cost more like $6-8.

Top tips: It is possible to pay a tuk tuk a higher fee to be transported to both sites in a single day, which also has the benefit of condensing this emotional history lesson.

We spend our first day visiting S21. Formerly a high school, the Khmer Rouge turned the compound into a secret prison during the Cambodian genocide, and it now stands as Tuol Sleng Genocide Museum to commemorate the nearly 20,000 people imprisoned at that site. We learn that only 7 of these prisoners survived. There are photographs of bloody bodies in varying degrees of decay, torture implements on display, and head shots from thousands of prisoners.

It’s an incredibly confronting place to visit, but we learn a lot about the horrible things that happened here. For a lot of Cambodians, this isn’t just history– over 2 million people were killed during the 4 years that the Khmer Rouge was in power. People’s mothers and fathers, people’s siblings, friends, neighbours…

The purpose of the prison was to hold dissenters and interrogate them, but the torture tactics employed by the guards make it clear that the Khmer Rouge wasn’t looking for information so much as they were looking for confessions. Prisoners were starved, sleep deprived, experimented on, physically and sexually abused, and held in impossibly brutal conditions, all to obtain signatures on treason confessions that may be entirely false and contain names of more “traitors”.

The next day, we visit the Killing Fields via tuk tuk. If we were disturbed by S21, the Killing Fields are nearly too much. We pay for an audio tour, which lasts a couple of hours and guides you around the field to numbered plaques and displays. The audio is actually incredibly informative, and has interviews with guards and recordings from prisoners. Nearly 1.5 million people were brought to the field from various prisons and executed in mass graves; the guards had strict orders not to waste bullets, so most people died form stab wounds, club blows to the head, or decapitation from axes. The audio tour directs us past some cactus-like plants, with sharp serrated edged, which we learn were used in lieu of a knife to slit throats.

Certainly some of the worst sites are the “killing trees”, against which babies and children were beat until their skulls cracked. They were then thrown into mass graves alongside their parents. The justification for this was to prevent future generations from harbouring ill-feelings toward to government, which could result in overthrow.

These few days have been a departure from our usual active and upbeat travels, but we are both glad to have learned about what happened here. I was never particularly interested in history while I was at school, but there is something different about seeing these places and hearing stories from people who experienced these events firsthand. The things we saw and learned here will haunt me for a long time, but that awareness is so important.

Read more about our travels through Cambodia