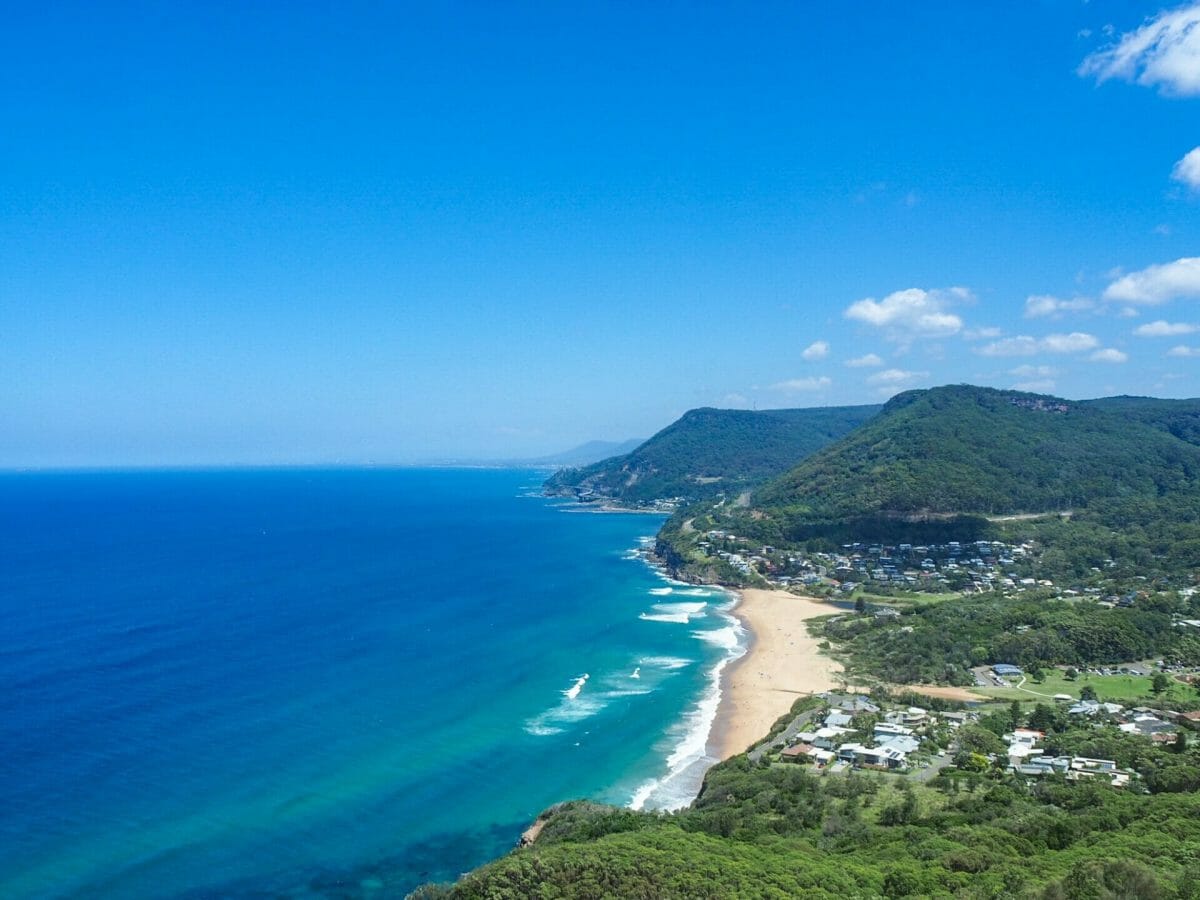 Nestled between a lush escarpment and golden beaches from Sydney’s Royal National Park to NSW’s pristine South Coast, the Illawarra region is positively overflowing with natural beauty. Without even a fraction of the tourist popularity of nearby Sydney, though, many people completely overlook this rich and scenic area in favour of more well-known city activities. While there are inarguably hundreds of amazing things to do in Australia’s biggest city, grab the opportunity to explore beyond Bondi Beach and the Opera House— jump on a train, cruise an hour south, and dive into one of the most underrated regions in NSW. Here are some of my very favourite viewpoints in and around Wollongong.

An engineering feat as much as a visual spectacle, Sea Cliff Bridge is one of only 7 off-shore parallel-to-coast bridges in the world, and is also one of the Illawarra’s most impressive landmarks, winding between Clifton and Coalcliff on the scenic Lawrence Hargrave Drive. And, just 30 minutes from Wollongong and less than an hour from the city, it’s an easy morning trip. For the best views, I recommend parking on the south side of the bridge and climbing up into the hills (along a very easily-missed trail) for an aerial view of this beauty.

Read more about finding the trail in this post: FINDING THE SECRET LOOKOUT ABOVE SEA CLIFF BRIDGE

Wollongong’s skyline is entirely dominated by a thickly forested escarpment, and one of the best spots to get on top and enjoy views over the region and its many beaches is Mt Keira. Rising just under 500m, it’s not a long or challenging hike to reach the top, but it’s often difficult to follow the trail (especially as it ascends straight up a dry waterfall bed). Still, it’s one of my very favourite walks in the area, departing from the intersection of Robsons Road and Northfields Avenue behind the University. For the less climbing-inclined, Mt Keira Lookout is also easily accessible via car, and a more mellow 5km Ring Track around the summit still offers wonderful views. Bring a picnic to enjoy in the newly improved Summit Park!

About 20 minutes north of Wollongong in the beachside suburb Austinmer, Sublime Point is another popular lookout over the Illawarra coastline. There’s a short but strenuous hike leading to the viewpoint from Foothills Road, but it’s also possible to drive straight to the top if you’re short on time (or if you don’t feel like breaking a sweat). Save this one for an especially clear day, as any fog and clouds will get trapped between the escarpment and the ocean, obscuring what truly is one of the best views in the area.

Read more about the hike: STAIR-STEPPING UP TO SUBLIME POINT

Situated just southwest of Wollongong near Unanderra (and the famous Nan Tien Buddhist Temple), Mt Kembla rises even higher out of the escarpment than nearby Mt Keira. It also offers a slightly different view, looking out over the densely forested Illawarra Escarpment State Conservation Area and Lake Illawarra. Even though there are powerlines running directly across your line of sight, this is still a beautiful spot, and also a popular starting point for several of the short day-hikes around Mt Kembla, including the 6km Ring Track. Navigate straight to this point using Google Maps, but beware of the pothole-dotted road and the surprisingly narrow lanes.

Named for the indigenous people who originally inhabited this stunning stretch of coastline, Wodi Wodi Track offers spectacular views, the best of which are accessible via a moderately short hike up to Mt Mitchell Lookout. It’s often difficult to see the start of the trail just north of Coalcliff on Lawrence Hargrave Drive (and it’s even more challenging to squeeze your car into the minuscule parking area), but you’ll be well-rewarded if you do. Not only is this one of my all-time favourite views, but it’s a lovely hike that will leave you wanting more of the Illawarra and it’s unassuming beauty. Follow signs from the carpark for “Wodi Wodi Track”, but when the path forks, continue along the “Forest Walk route” for about 1km to reach this stunning viewpoint atop Mt Mitchell.

Looking out over Lake Illawarra and Mt Kembla

For views of both Mt Kembla and Mt Keira, there’s no better spot than this little-known lookout about 3 minutes beyond Mt Keira Summit Park on Harry Graham Drive. The signage is incredibly poor, but you’ll see a small carpark on your left and a little path leading about 100m out to the fenced viewpoint. Just before the wooden boardwalk, veer right into the forest and continue out to the rocks for amazing, unobstructed views of Keira to your left and Lake Illawarra and Kembla to your right. The only thing that could make this spot any better? Hardly anyone knows about it, so it’s unlikely you’ll be joined by another person!

Even over all the other gorgeous views, stunning beaches, and amazing hikes in the Illawarra, Bald Hill in Stanwell Tops is the first destination on my tour for out-of-towners, every time. On a clear day, the view is simply unrivalled, looking out over the scalloped coastline and the serpentine Sea Cliff Bridge in the distance. For $250, you can actually soar above this postcard view for half an hour on a tandem paraglide! To me, this point shows off the beauty of the region like nowhere else, and it’s absolutely no wonder, sitting on this grassy hill and looking down at the scenery below, why I’ve chosen to make Wollongong my home.

Getting to/around the Illawarra

Many of these lookouts and viewpoints are accessible via public transport from Sydney. The Illawarra/ South Coast train line runs down to Wollongong (and beyond), including stops near Sea Cliff Bridge in Coalcliff, Bald Hill in Stanwell Tops, Mt Keira in North Wollongong, and Sublime Point in Austinmer. Still, the best way to explore this region and get off the beaten path is to drive. You could tackle many of these spots in a single day, but you’ll probably need 2 days to tick everything off, including the bush walks.

Where to stay in the Illawarra