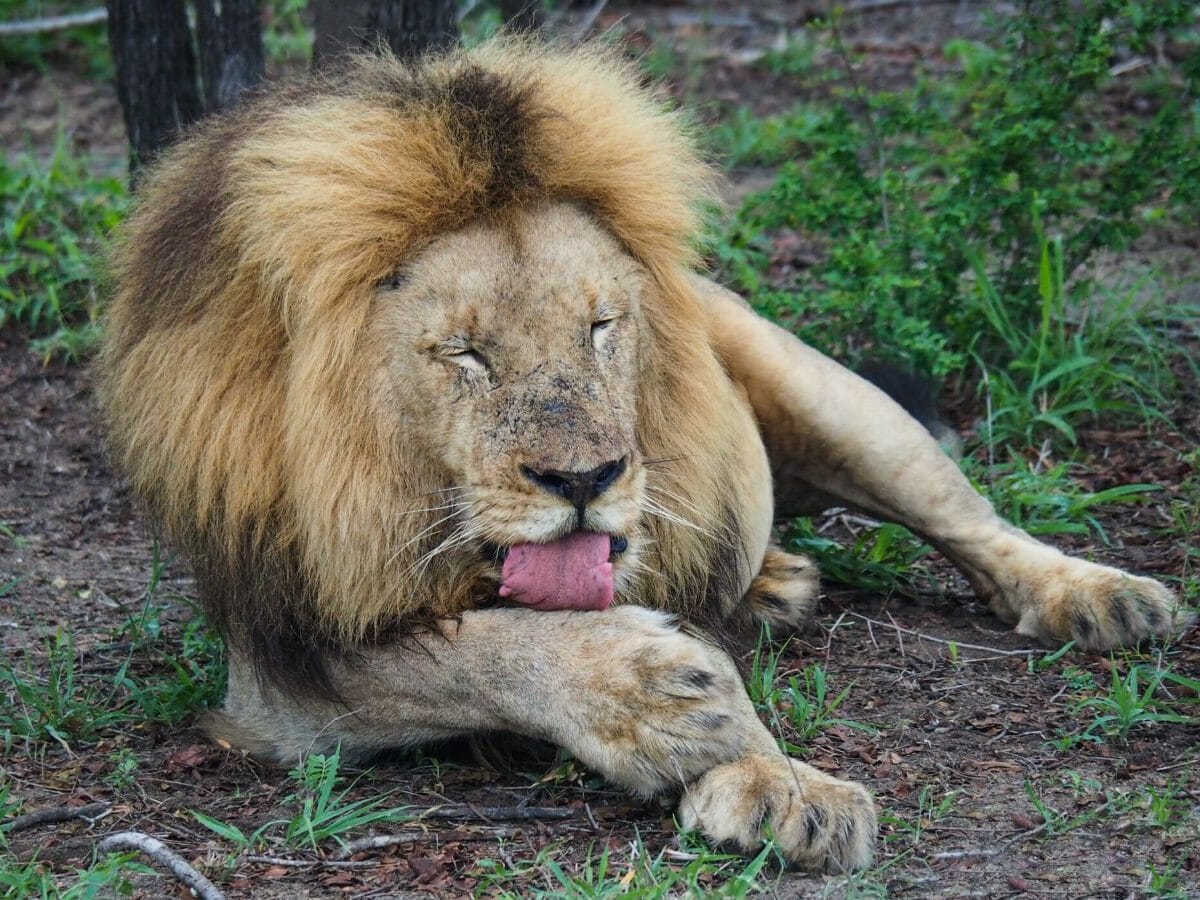 The phone in our chalet rings at 5am this morning, but this is still sleeping in compared to the 330am alarms in Kruger the last few days, so I’m feeling surprisingly springy. Not to mention that on our first game drive in Sabi Sands last night, we managed to see a leopard twice and about a dozen lions, including a cub, so the excitement alone has me up and far more active than usual. At 515am, our tracker, Riforce, comes to pick us up in the safari vehicle (we aren’t allowed to walk alone to the main lodge when it’s still dark because the property is unfenced and animals from the Reserve can wander straight in) and takes us for tea with the other two couples staying.

By 530am, we are all in the Land Rover, piled under blankets, cameras in hand, ready for some more excitement. We don’t have to wait long— almost immediately, we cross paths with a pack of wild dogs, which are a once-a-month rare find, according to the ranger. (Mum and I actually did see a pack in Kruger yesterday, but they were all sleeping under a tree at a distance, so they really looked more like a pile of dirt than dogs, which hardly counts.) There are about 20 dogs in this particular pack and they are pretty amusing to watch as they run for about 5 minutes (us following behind in the vehicle) and then curl up for about 5 minutes to rest, just to get back up and run again. They are also a lot more beautiful than we could have appreciated from a distance, with their painted coats and cute little white tails.

Not long after leaving the dogs, though, we get even more excitement when the tracker hops off the car to inspect some tracks in the sand that belong to a large male leopard. We are driving around, looking for spots in the distance, when we come across a pride of lions, different than the pride we saw yesterday afternoon, which distracts us from the leopard pursuit. There are several small cubs curled up next to half a dozen lionesses right in the middle of the sand road and I go crazy taking photos. I’m convinced I could see lions every day for a year and still not get over it.

Amid the frantic camera clicks, a call comes in over the radio that two male lions are nearby, which we haven’t seen yet and I’ve been really hoping for. While I have minor fits in the back, we zip off to find the lions, eventually coming right up to one as he sits and yawns. It’s the most incredible feeling to lock eyes with a lion, knowing that he could eat you for a light snack if he wanted to, just seeing his size and power up close in the wild. Despite all this, though, he’s still just a big kitty to me and I have to fight the urge to fling myself off the truck and try to snuggle him like I would Henri.

After some time with the lion, we go looking for his brother and find him walking nearby. Even more like a big kitty, he curls up under a tree and starts to clean himself, which is about the most amazing thing I’ve ever seen in my life. I’m reluctant to break away from the lions, but eventually we do leave them to their catnaps and drive on back to the safari lodge, passing a big elephant on the way. (It’s really amazing that seeing an elephant cross the road right in front of the truck isn’t even in the top 3 most amazing things that happened today— I have to remind myself that we are seeing a wild elephant and it’s a pretty big deal!

Once back at Arathusa, we say goodbye to one of the couples and enjoy an incredible breakfast with the Australian couple, who tell us about their travels through South Africa and recommend a few places to visit on our trip (it’s actually quite difficult to think that we will have to leave this lodge and not see lions every day, so I try not to think about it).

After breakfast, we go out on a bush walk with the ranger, who shows us a variety of plants (including one whose contents can be used as eye drops), hyena tracks, and some African birds. The 3 of us on the walk all follow single-file behind the ranger and try to make little noise, as animals are familiar and comfortable with the safari vehicle but have an inherent fear of the upright position. It’s impressive just how well the ranger knows all the flora and fauna, and also the geology, of the Reserve, so we just try to soak up some of the knowledge before heading back to our chalet and enjoying a few hours of rest (prime photo editing time) before rendezvousing with the others for lunch in the main lodge.

Sadly, it is no longer just the four of us staying, but only a further 2 guests join us for lunch, an elderly couple from London who have literally been everywhere. I indulge in a few gin and tonics with my pork ribs, so I’m suitably merry for the afternoon drive, but mum is perhaps even more merry, so we have fun before any animals have even been spotted.

Our first find is a mummy and baby giraffe nibbling on the leaves together, and of course the little giraffe is absolutely adorable, only coming up to about its mum’s tail height. Our ranger tells us that they are snacking on acacia trees, which are actually very fascinating. Acacia release tannins as a defence, so after a few minute the giraffe will start tasting bitterness in the leaves and move onto a different tree, preventing entire trees from being eaten to death. More so than just that self defence, acacia also release pheromones as a response to being eaten, which are carried in the wind and act as an alert to other acacia trees in the area who can respond by pre-emptively increasing their tannin levels. Clever giraffe have therefore figured out to eat downwind. It’s pretty remarkable that a tree is actually able to control its own composition that much, and even more impressive that trees are able to communicate with one another, but also incredible that the giraffe have figured this out! I’m suitably blown away by the wonder of mother nature. There’s still so much we don’t understand about plants and animals and our planet in general, but I’m constantly amazed by all of the things that we do know.

After our time with the giraffes, we hear a call come over the radio and zoom off to find another leopard. This cat has come into the park from the north, answering a very loud mating call from one of the female leopards, and is not used to the trucks yet, so the rangers are eager to see him and start getting him gradually accustomed to the presence of the safari vehicles. When we find him, he is sitting atop a giant termite mound, but doesn’t appear at all skittish. Much like the leopard we saw yesterday, he is looking at us with mild interest, but doesn’t move from his spot on the mound and doesn’t put up any noticeable defences.

Finally, we must leave our cat friend and journey back to the lodge, passing a number of kudu and antelope on the way, but more notably finding two rhinos sleeping together in the dark. We usually stay to watch cats or other nocturnal animals in the dark under the flashlight, but we can’t actually stop to see the rhino because it’s too disruptive for them to be disturbed in the night, so we are forced to drive on by, hoping to find them again in the morning. Once back at the lodge, we tuck into a delicious dinner and more wine, sharing in some great conversation and wishing that this wasn’t our last night at Arathusa.

Photo journal: Namibia, get here before the rest of the world finds out about it