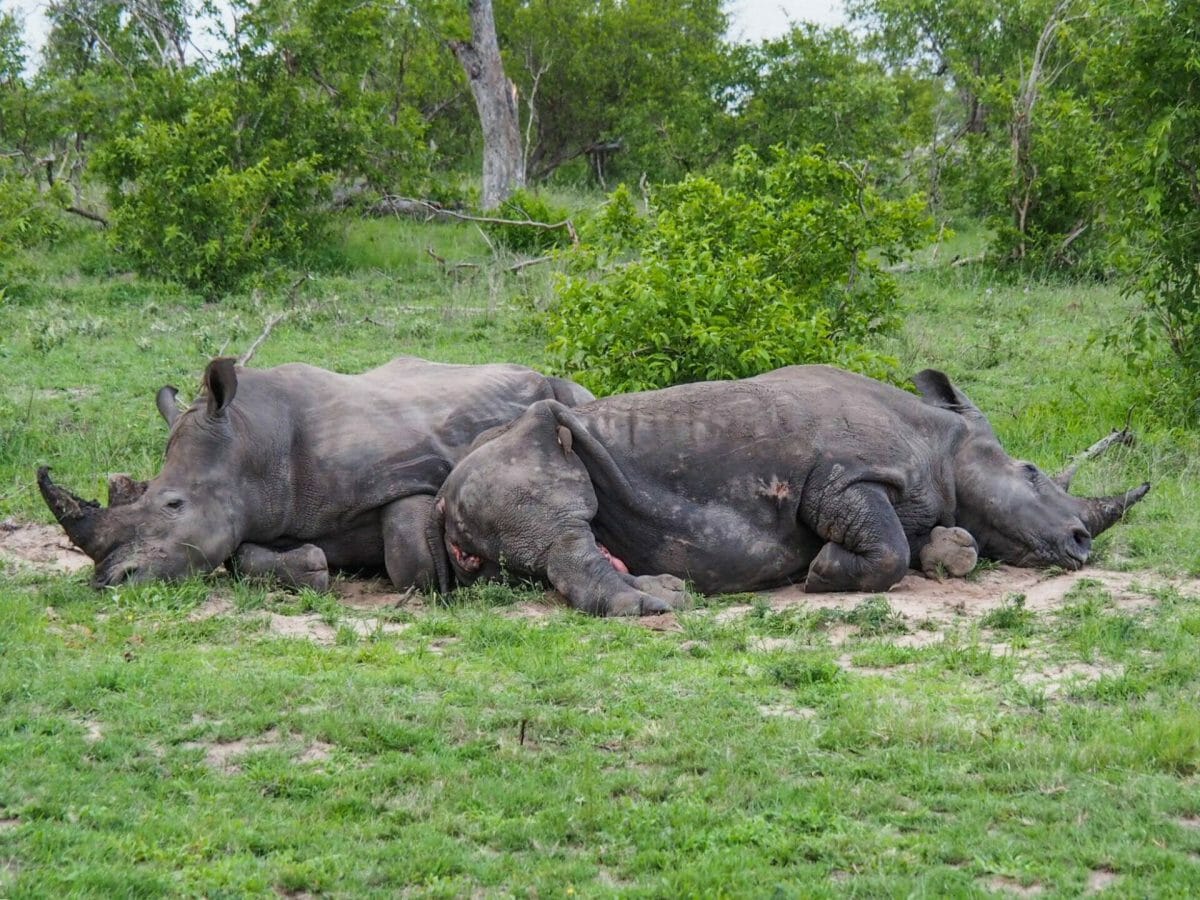 I must admit, I’m a bit heartbroken that the final day of our safari has arrived so quickly. I had no idea what to expect before we arrived in Kruger and then again in Sabi Sands, but both places have truly blown my mind in every way, so it’s with a slightly heavy heart that I get up for my last 5am wake-up call (not that I will miss that part), put on my safari best, grab my camera bag, and head out into the main lodge for tea before the drive.

Almost immediately after driving out of the lodge, we spot a pair of sleeping rhinos, the same rhinos that we saw last night in the dark and were unable to stop and see for fear of spooking them. Our ranger tells us that the rhino on our left is a young male who is seeking protection from the older female rhino. Sadly, she has been unable to have baby rhinos of her own due to a large cyst on her ovaries, but he assures us that she is not in any pain. (Although the park has a strict “leave it to nature” policy, they will intervene for rhinos since they are endangered, so a vet has been out to examine the rhino and make sure she’s ok.)

After our time with the rhinos, we drive on and find a couple of baby wildebeest running around and playing, which is absolutely adorable, a baby giraffe nibbling at the leaves, and then a large elephant having a catnap. Our ranger is rather surprised, as elephants usually don’t lay down for a nap this close to the road, but he’s just a few metres from us, snoring away. Apparently really large elephants aren’t able to sleep laying down because they are unable to get back up (we actually watched an elephant in front of the lodge under the floodlight struggle to get back up from laying down for ages last night), but this guy pops up quite easily after we had been sitting and watching him for about 10 minutes.

Unfortunately, this morning is mostly elephants, zebras, impalas, rhinos, and birds, so we don’t see any cats on our last safari drive. I had been dreaming of seeing cheetahs, but I guess that will just be an excuse to come back in future! And to be fair, I never ever imagined we’d see this many lions and leopards, so I am far from complaining. We hop out of the vehicle for tea and snacks with our group, the newly married Australian couple and the elderly British couple, and reflect on what have truly been some of the greatest days of travelling, many thanks to our wonderful ranger and tracker, and certainly the lodge itself.

When we get back to Arathusa, we sit down for a phenomenal breakfast of eggs benedict and then hurry back to our room to shower and pack up. By 11am, we are hauling our bags to the front of the lodge (rather, one of the staff is hauling our bags while we hurry behind) and hopping into the car for the drive to Hoedspruit Airport, which is about 90 minutes away. We say goodbye to some of our new friends and say a thousand thank you’s to our ranger and tracker, Sabastion and Riforce, and then we are off, flying first to Johannesburg and then onwards to Durban for more adventures in South Africa.

Stellenbosch & Franschhoek: A guide to wine tasting in the Cape Winelands