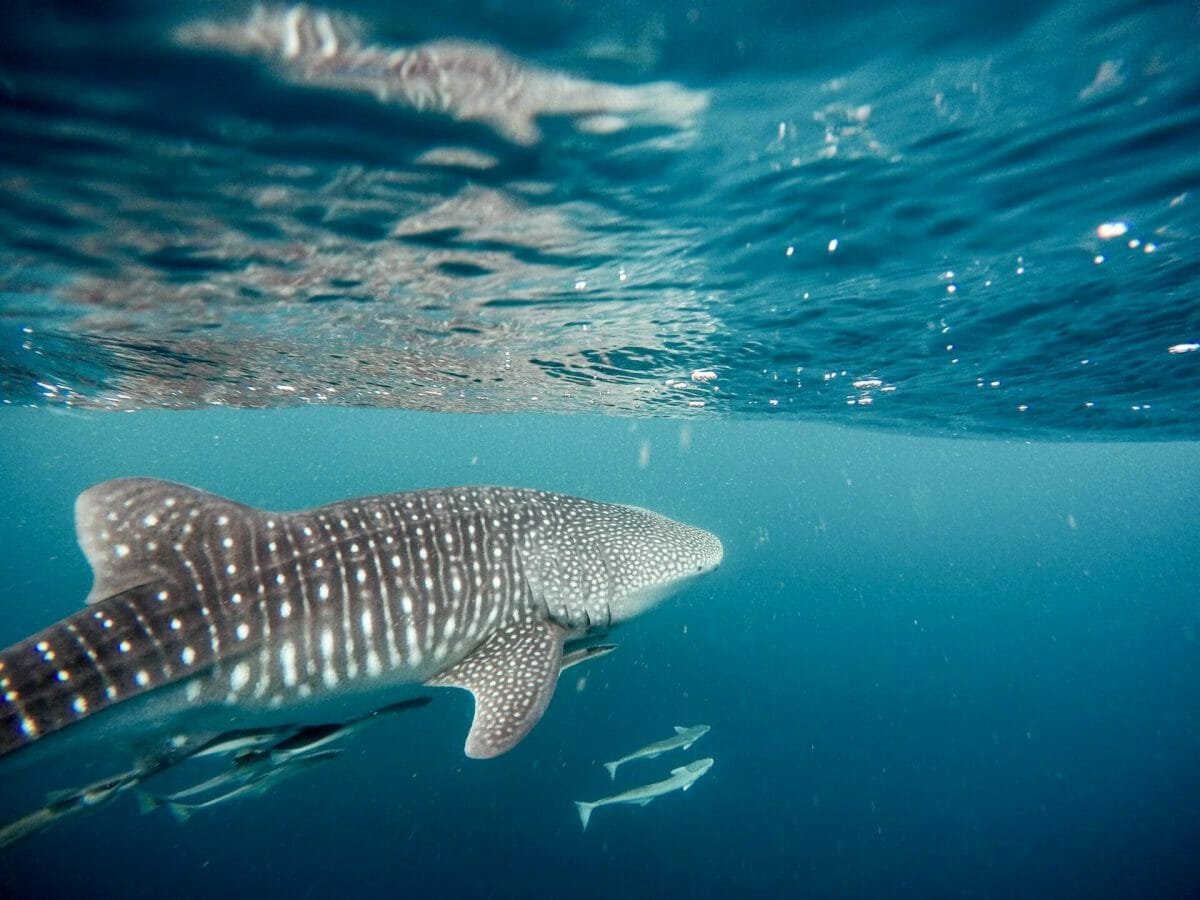 For all the fascinating marine life and incredible creatures who inhabit the Sea of Cortez, perhaps none is more impressive than the whale shark (tiburón ballena, en español), a plankton-feeding carpet shark whose calm grace and striking beauty belie its almost incomprehensible size.

Reaching an average 40ft and 20 tons, these are not only the largest sharks in the ocean, but one of the largest animals alive today. And yet, they are completely docile and wholly unperturbed by human presence— offering one of the most spectacular (and ethical) wildlife encounters for intrepid snorkellers!

The sheltered Bay of La Paz is considered one of the best places in the entire world to swim alongside these gentle giants; during the season from October to May, sightings are practically guaranteed. Strict protections for whale sharks in Baja California Sur require that you join a tour, which are hawked with regularity along the Malecón— but for an experience befitting your bucket list, there’s none better than local experts Baja Adventure Co.

All the details: Snorkelling with whale sharks & sea lions in La Paz

Cost | Baja Adventure Co. offers a wonderful half-day excursion (~5hrs) to swim with whale sharks, snorkel with sea lions, and enjoy a fresh ceviche lunch on a quiet cove of Balandra Beach for $175USD. For those short on time (2-3hrs), there’s also the option to just snorkel with the whale sharks for $125USD. Both tours include water, soft drinks & snacks throughout the day, plus all snorkel gear and wetsuits!

Getting there | Tour prices do not include transportation, so you’ll either need to drive or Uber to the Baja Adventure Co. office at Marina Costa Baja, about 10min north of La Paz.

Where to stay | Playa Tecolote, just north of Balandra, is one of our favourite free campsites near La Paz! If you’re travelling through Baja by van or RV, be sure to check out this post on all of the best camping spots (most of which are FREE): THE ULTIMATE BAJA CAMPING GUIDE (+ 35 OF THE BEST VANLIFE & RV CAMPSITES!)

Top tips | Depending on conditions, expect that most of your belongings will get wet on the boat, so I’d recommend packing a dry bag with your towel, camera/phone, and some cash for a tip. Baja Adventure Co will provide you with a wetsuit and snorkel gear, so just wear a comfortable swimsuit (and of course you’re able to BYO mask if you do have one!)

A big thank you to Baja Adventure Co. for hosting us on their awesome Whale Shark Extended tour in exchange for an honest review of the experience. As always, all opinions in this post are entirely my own!

On Saturday morning, we awoke dark and early in our van to a 5.20am alarm, slipping on swimsuits and then hopping up front for the short drive north to Baja Adventure Co’s office at Marina Costa Baja. Neither Dan nor I are morning people, but when it comes to unique wildlife experiences, we’re always willing to make an exception and rise before the sun!

By the time we’d mingled with the other 5 passengers and finished trying on wetsuits and fins for sizing, it was finally light out. We followed our guide Dani and our captain Charlie onto the boat, the cool morning air dripping with palpable anticipation.

For all of us, it would be our first time swimming with whale sharks— and as with any bucketlist experience, raw excitement mixed with an unspoken anxiousness, each hoping desperately that the day would live up to our lofty expectations.

In addition to being one of the best places in the world to swim with a consistent population of whale sharks, upwelling in the Bay of La Paz concentrates much of the plankton and krill (their primary food source) in shallow waters that make for incredibly easy snorkelling.

When conditions are at their most ideal (typically in the early season, around autumn), visibility extends some 20m and it’s even possible to spot whale sharks swimming from a nearby sand bar, but in the middle of the season, you’ll sacrifice some visibility to plankton-clouded waters that bring sharks in even larger aggregations.

It’s a trade-off that means there’s essentially no bad time to be in the water swimming with whale sharks!

Several years ago, the local government in La Paz and the state of Baja California Sur implemented legislation to actively protect the modest whale shark population in the bay, which is estimated to be 50-100 juveniles (under the age of 30 and around 30ft in size).

These regulations began with strict bans on fishing and physical interaction with the whale sharks and have since evolved to control exactly how/where tour boats are permitted to operate within proximity to the sharks.

For all but the luckiest of swimmers or boaters, the only way to see whale sharks in Mexico is now with a guided tour like the one we’d just joined. At $125+, it’s a considerable stretch to the otherwise minuscule budget required to travel through Baja, but an important step to preserve an endangered species that’s long been at risk due to illegal fishing and human development— and THAT is worth every penny!

Cruising out of the marina, Dani produced laminated maps of the area and traced our route through several zones: the first was merely for transit, the second butted up against the El Mogote sand bar and was the protected area where we’d be allowed to swim with the whale sharks, and the third outer zone permitted only surface viewing.

Every year, she explained, the restrictions for interacting with the whale sharks become tighter— fewer boats are permitted in the protected zone, passengers and crew on those boats are limited, and only 5 people are allowed in the water with any given whale shark to reduce human impact on wildlife.

Not only are these restrictions a commendable effort to protect an endangered marine species, but they also do a lot to improve the overall experience for swimmers, who get time in the water in pairs without the pressure of other boats competing for proximity to the same whale shark.

Next, Dani produced printed images of whale sharks and identified several notable characteristics, such as their horizontal mouth and wide-spaced eyes that afford excellent peripheral vision but result in a blind spot immediately in front of their face (which we’d need to respect by swimming alongside rather than in front of the shark).

Examining their gills (distinctive of fish & sharks) and vertical tail position (fish & sharks move their tails side to side, while whales and dolphins move their tails up and down), she explained that the whale shark is not a whale at all but actually the ocean’s largest fish, part of the shark family.

A full grown whale shark can reach up to 40ft, DOUBLE the length of the van we are living in— even the juvenile sharks in the Bay of La Paz extend to 30ft (and once in the water, it was genuinely hard to imagine a largest version of what was already the largest marine animal I’ve ever seen).

Finally, we arrived to the area alongside El Mogote where we’d be swimming with the whale sharks and we all frantically readied to enter the water, stowing phones and cameras, turning on GoPros, locating our fins in the pile, removing life jackets and zipping up wet suits.

It was incredibly windy and the ocean spat wild waves against the boat, conditions that would potentially complicate our ability to swim alongside the sharks or even identify them through the churning water— and yet, it was only minutes before Charlie pulled our boat alongside a dark shadow and the first group was plunging into the water.

Amidst the energetic shouting of “SWIM with the shark!” by our boat captain, Dan and I hurled ourselves off the side of the boat into dark and slightly ominous waves.

There was hardly even a moment to get our bearings underwater before we found ourselves face-to-face with a 30ft whale shark, his sleek spots and ribbed dorsum disguised by dark water until we were nearly on top of him.

I had to swim at maximum speed to stay along his right side, kicking through swell in an effort to keep him in my sights for as long as possible. Although whale sharks are slow swimmers, the conditions made it difficult to anticipate his movements and Dan soon found himself directly in front of an open mouth, inhaling sea water in a slight panic as he back-pedalled out of the way.

The whole experience lasted only about 5min— it’s amazing how this seemed so short as we watched other swimmers from the relative comfort of the boat, but once in the water ourselves, time distorts to the point of apparent slow-motion and I emerged from our first swim feeling as if I’d just finished a race, panting and shaky from the exertion of keeping up through the rough water. But also, SO thrilled.

We rotated swimmers continuously throughout the morning, each group getting 3 opportunities to swim along the whale shark that was circling our boat. And knowing what to expect, each subsequent trip into the water improved our view of the shark and our ability to swim with him.

The incredible pulse of adrenaline lingered long after we were out of the water, but all  travellers were in staunch agreement that we’d just witnessed something truly magical. Before our racing hearts had even calmed to normal, I was already longing to be back in the water, swimming alongside the tiburón ballenas just one more time.

For now, however, it was off to the next adventure, cruising through rough chop to a nearby rocky island to snorkel with a playful sea lion colony.

I’d nearly forgotten about the day’s additional activities for all the excitement of the morning, but swimming with the lobos marinos was quite nearly as enchanting (and a fair bit more relaxing) than swimming alongside the sharks.

We wrapped up the day by cruising over to a hidden section of Playa Balandra, the most famous beach in La Paz and recent recipient of a tourism award that named this crescent of white sand the best beach in all of Mexico.

High praise, but entirely befitting of the turquoise water and silky shores we soon found ourselves relaxing on. With a plate full of fresh ceviche and salt-streaked cheeks, we struggled for words to describe what we’d experienced today.

Rough conditions notwithstanding, swimming alongside the world’s largest fish had lived up to the incredible expectation and it was impossible not to feel enamoured by these gentle creatures whose placid demeanour felt at immediate odds with their incredible bulk. And now, I just can’t wait to get back in the water with them.

VANLIFE BAJA & MEXICO: HOW TO GET THE BEST MEXICAN AUTO INSURANCE FOR A CONVERTED VAN OR CAMPER

VANLIFE MEXICO: EVERYTHING YOU NEED TO KNOW ABOUT THE FERRY FROM BAJA TO MAINLAND MEXICO (LA PAZ TO MAZATLÁN)