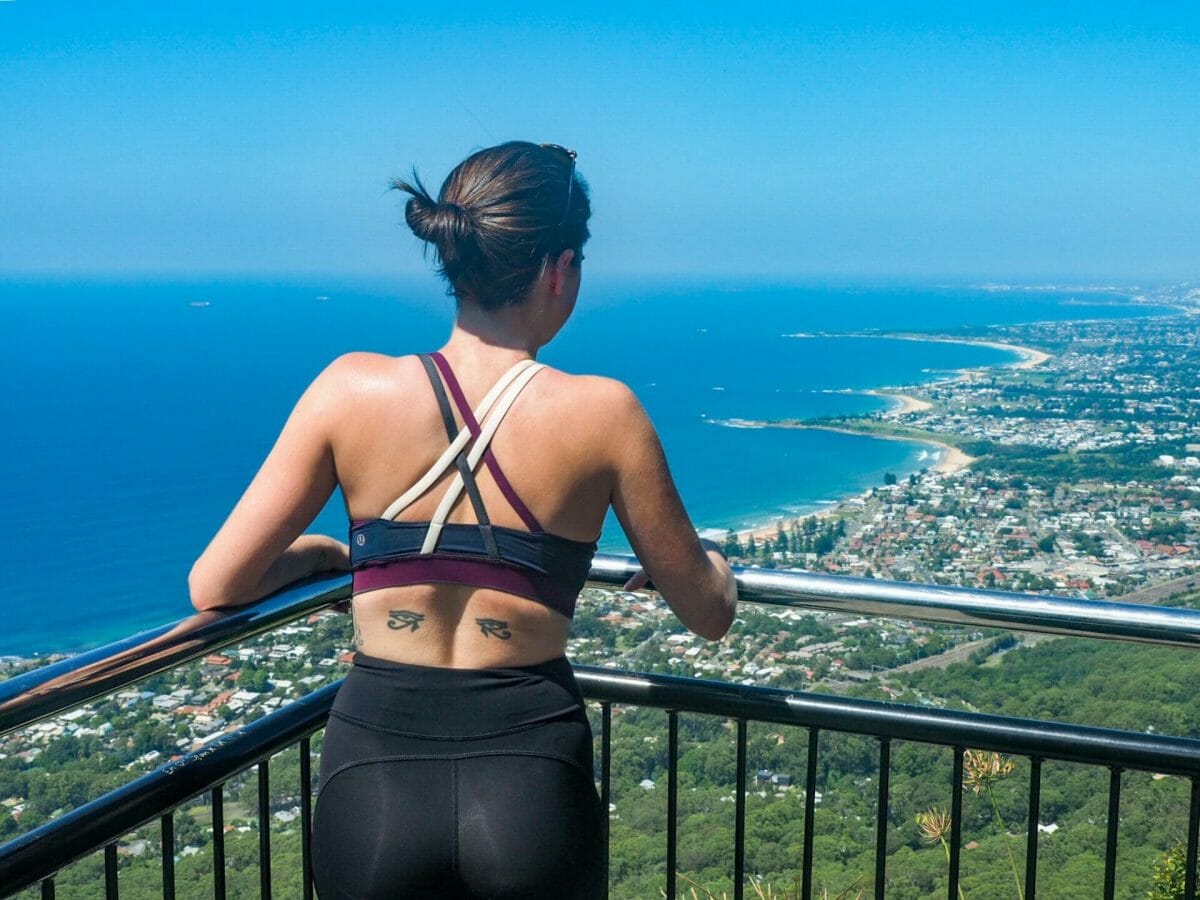 Stair-stepping up to Sublime Point

For unparalleled views of the glistening coastline from Austinmer to Wollongong, and even a great vantage point over the lush Illawarra Escarpment, Sublime Point Walking Track is a short climb about an hour south of Sydney that just can’t be missed. Although you’ll earn the view with plenty of sweat (hopefully not too much blood or tears), the network of ladders and steep stairs keep this walk interesting right up until you pop out of the overgrown forest and onto the lookout itself. On a particularly sunny day last weekend, my workmate Diana and I tackled the hike again, this time camera in hand, to document one of my absolute favourite spots near home.

The start of the trail from Foothills Road

There’s plenty of parking on Foothills Road, but this walk is also less than a kilometre from Austinmer train station

It’s possible to start and finish at the lookout itself, but I prefer to start from the lower trail on Foothills Road, walking up to Sublime Point and then back down to the car (or the train station)

The trail ends at Sublime Point, but walk back down to your starting point

~ 1.5km return, not including the walk to/from the train station

~ 45-60 min return, depending on your walking pace

It’s an incredibly short distance, but the trail is rather steep and involves a fair bit of stair/ladder climbing as you approach the top

Proximity to public transport and plenty of parking, café at the lookout, road access at both ends, consistent mobile reception

Tap to fill up water at the lookout, plus café selling drinks and snacks

Some people choose to park at the lookout and hike down, then back up. Honestly, I don’t see the point of starting at the view and then walking to a road, it’s a lot more exciting to walk to the view point (and better to do your strenuous climbing on the front end rather than after a descent).

Diana walking through the forest

In a residential area of Austinmer, right up against the escarpment, the trail to Sublime Point begins at the end of Foothills Road (directly across from the ibah Day Spa, which looks absolutely amazing). The path winds through forests of palms and ferns, which provide very welcome shelter from the sun even on hot days, but almost immediately there are stairs to contend with on the steep ascent, so expect to be hot and sweaty regardless of the shade. About half-way up, the trail itself gives way to a series of metal ladders bolted into the cliffside, and the climb begins in earnest. Thankfully, it’s not long before you start glimpsing views of the coastline through the trees and then, almost before you know it, you pop out at the top.

ibah Spa at the start of the trail

Steep ascent to the lookout

Emerging from the trees (likely gasping for air and covered in sweat), Sublime Point lookout is just to your right. It tends to get a bit hazy at the top, but on a clear day, you can see many of the Illawarra’s golden beaches, even as far as Wollongong. There are some phenomenal photo ops at the lookout, so take plenty of time to enjoy the scenery, maybe even having a coffee at the café before heading back down to your car.

Sublime Point is a fast-favourite Illawarra hike with stunning views, and it has few rivals in terms of accessibility, its well-defined trail, and just overall brevity. This is a hike I revisit often and one of the first I’d recommend to out-of-towners or people who are new to the area, as the scenery is nearly impossible to beat. It’s certainly a challenge— there are crazy people who run up and down several times every morning, but for most it’s a fair effort just to walk to the top and back once. Try to find a clear day to tackle this trail, and then tie-in with a visit to the nearby Sea Cliff Bridge, one of the Illawarra’s most notable landmarks, and Bald Hill, another fantastic view over the scalloped coastline.

AN AFTERNOON STROLL FROM ROSE BAY TO WATSONS BAY