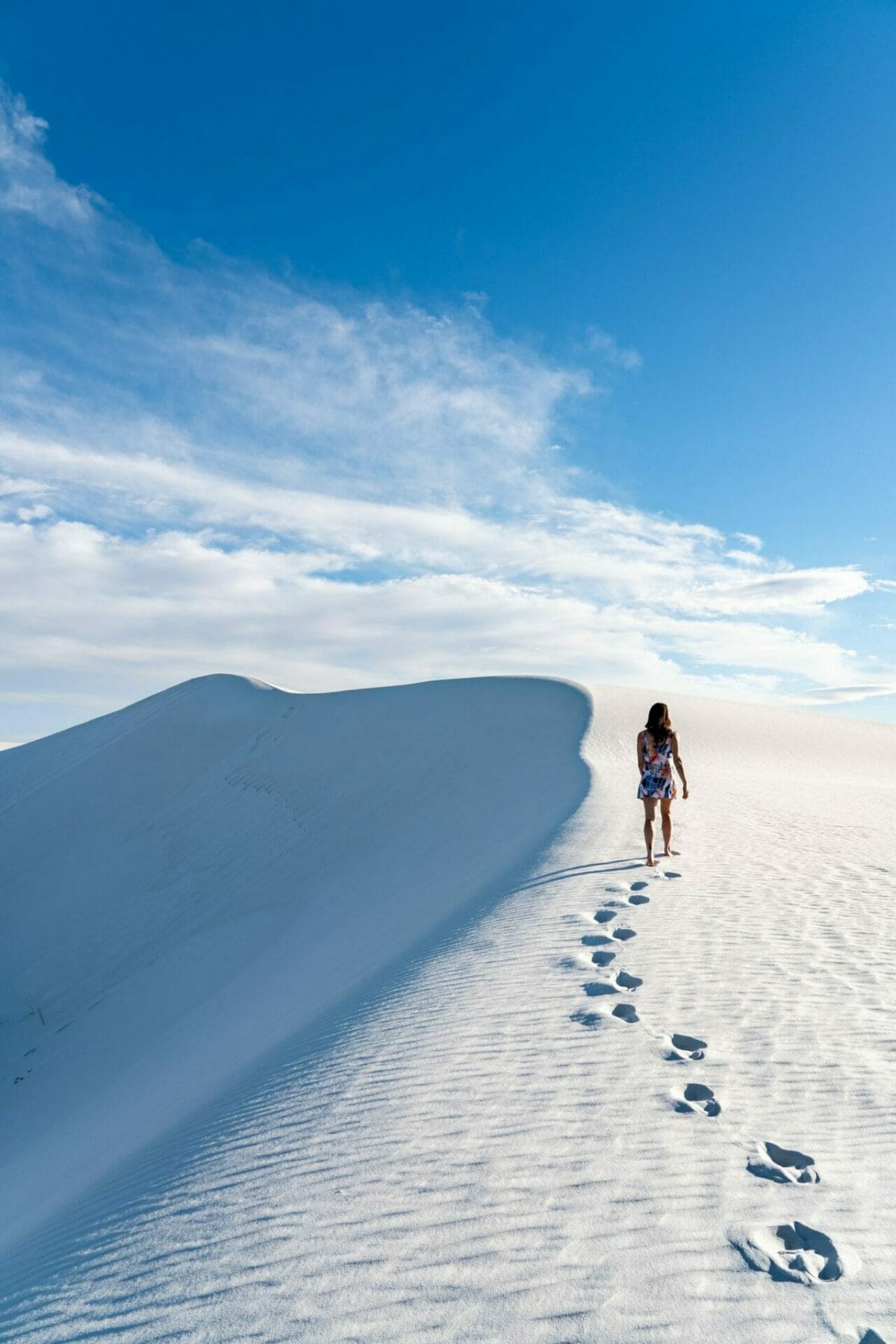 Although we’d already been enjoying our time in New Mexico up until this point, it was unquestionably this week that impressed us most and cemented innumerable sites and experiences among our trip highlights. From one of the country’s youngest national parks to riverside hot springs and beachfront camping, there’s no doubt that this was one of our most scenic weeks yet!

Last weekend, we drove about 4hrs from Albuquerque to Alamogordo in southern New Mexico to visit White Sands National Park, a destination that has eluded me once before (when Dan and I met in Joshua Tree last year, I never did make it onwards to White Sands) and that I was determined to see now.

The park isn’t close to much of anything (or so we thought) and it was a sizeable drive to get this far south, but the second we set eyes on the glistening expanse of white sand that comprises the park, we were convinced that it had been worth the effort— as well as the wait.

Home to the largest gypsum dunefield in the entire world, there’s truly no comparison for the endless sea of sparkling white sand that stretches to the base of jagged mountains at White Sands National Park.

Where most of the world’s sand is formed from quartz-containing rocks like granite or even eroded from sandstone, the sand dunes at White Sands are the product of a rare mineral component, gypsum, which was gradually washed from the surrounding mountains and deposited into the basin.

In any other climate, water-soluble gypsum is likely to have simply washed away, but in New Mexico’s arid heat, the water quickly evaporated and left large crystals of solid gypsum in its place. Over millions of years, and with the aid of heavy wind, these crystals were eroded into the powder-fine sand that today comprises White Sands National Park.

Although quite sizable, vehicle access to the National Park is limited to a single sand road and about a dozen pull-outs/car parks from which you can walk into the sand. There are even several “hiking trails” that lead through the dunes to showcase the unique flora and fauna of the region, but we opted out of the 0.5mi boardwalks and arbitrary 2mi “trails” through the dunes in favour of blazing our own random path through White Sands.

Like Great Sand Dunes National Park in Colorado, it’s the ability to lose yourself in the dunes that makes this place special in the first place!

We walked for hours into the sand dunes both days, escaping all other visitors and even all human footprints, returning to the parking lot long after dark with as many as 8mi under our barefoot soles.

We even met a camel named Samson, whose owner lives in the nearby foothills and brings Samson to the park every Sunday for his weekly outing.

It was pure magic.

Towards the end of the week, we drove a short distance past the park, through Las Cruces, and onwards to the small town of Truth or Consequences.

I’d actually noticed the town on a map while planning my road trip last year and was understandably curious about what kind of place Truth or Consequences, New Mexico might be. The reality is a lot smaller and rougher than I might have envisioned, but it’s also concealing some major gems!

For a town that was formerly called Hot Springs, it’s no surprise that Truth or Consequences (which changed its name in the 1950s in a bid to capture the attention of a popular radio program by the same name) is home to some of the best hot springs in the entire southwest.

One in particular stands out, rated at the top of every list and recommended by an alarming number of people we’ve met in the last month: Riverbend Hot Springs.

The small and unassuming facade divulges nothing of the dozen-or-so naturally heated rock pools sheltered behind the ivy-covered gate & overlooking the lush Rio Grande, but once inside, it’s clear this is paradise.

And so, for $32.50 each, Dan and I soaked for 10hrs in pure paradise, slept comfortably in an adjacent camping spot & then took a piping hot shower (which, yes, was our first of the week).

It was a definite splurge, but worth every single penny to watch the sunset while laying in a hammock INSIDE a 101-degree hot spring, and even more so because it felt like we had the place to ourselves.

To conclude what had already been a phenomenal week in New Mexico, we drove just a few minutes out of Truth or Consequences and spent the weekend camped on the sandy shore of Elephant Butte Lake.

The state park offers equipped or primitive camping, both of which I believe are typically paid sites, but since it’s the slow season, there was no one at the pay station the entire time we were there!

It’s not our first experience with this— neither Black Canyon of the Gunnison National Park that we visited a couple weeks ago nor the more recent White Sands National Park were charging entry since this is considered outside of the season. Essentially, November is the best time to go anywhere if you want zero people, first choice for every site, and heaps of off-season discounts.

Buoyed by our excellent score in finding this campsite overlooking the water, we spent several days relaxing in the sun and tackling jobs around the van, all with the magical backdrop of Elephant Butte Lake. By the time we rolled out on Monday, we were genuinely disappointed to be leaving such a stellar site— but off to the next adventure!

We stayed at our first ever paid campsite this week, but when it includes 16 hot spring pools along the river, I think you’ll agree it was worth the splurge!