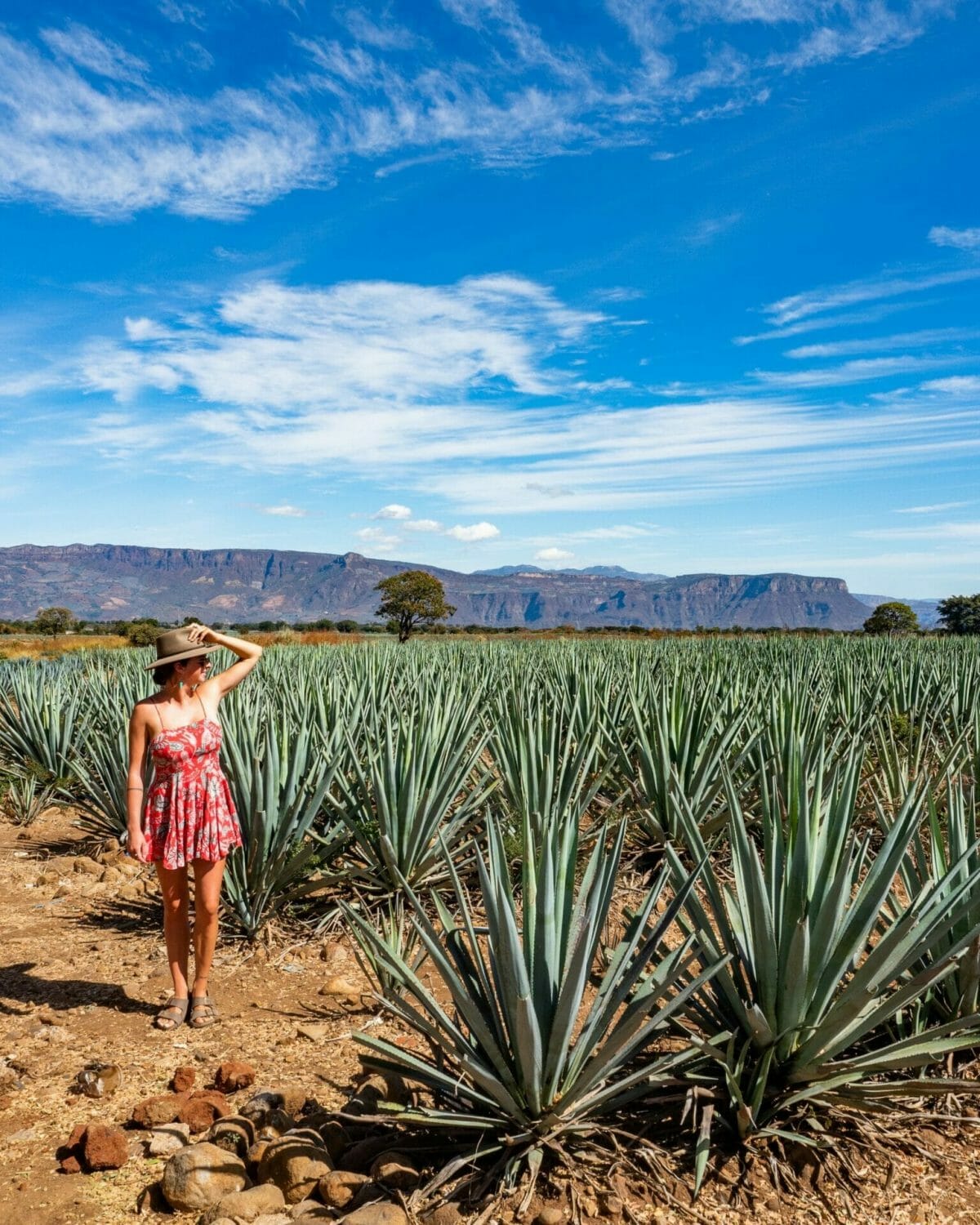 Finally leaving the coast behind after nearly 2 months on the beach in Baja, Sinaloa, Nayarit, and Jalisco, we cruised inland this Monday to explore some of the countryside. If anything could drag us away from the relaxed vibes of San Pancho, surely it was Tequila, a small town know as birthplace of— you guessed it.

Frequent readers (or those familiar with Mexico) might recognise the phrase Pueblo Mágico, an esteemed designation given by the government to towns or sites across the country that contribute significant cultural or historic value.

There are currently 132 of these “magic towns”, and after visiting half a dozen since arriving in Mexico, we’ve come to recognise the phrase as a pretty solid indication that we’re in for something special. Without fail, these towns are always strikingly beautiful (think rustic cobblestones and 18th century architecture), spotlessly clean, and steeped in local tradition— and Tequila is no exception.

Even beyond the booze, we were blown away by the rich cultural heritage still celebrated in Tequila, particularly the voladores de papantla performing a centuries-old “dance” whereby men dressed in traditional folk outfits and playing the pan flute fly by their ankles around a wooden pole in the centre of town.

It’s one of the more unusual local customs we’ve encountered in Mexico, but it’s pretty incredible to witness (if you click the “jalisco” highlight on my instagram page, you can see a video!).

And now back to the tequila…

This charming Pueblo Mágico in central Jalisco earned its spot in history as the birthplace of tequila, a spirit which remains one of Mexico’s most notable exports.

Although it wasn’t produced in its current form until the 1500s and wasn’t commercialised until after the Spanish invasion in the 1700s (first by the Cuervo family and shortly after by the Sauza family), early versions of tequila have been documented in Aztec and Olmec pictograms as far back as 1000BC— pulque, which you can still find in Mexico today (and which I fawned over for multiple paragraphs in my last post), is made from the fermented sap of the agave plant and considered to be the grandfather to modern tequila.

Now an enormous source of local pride, there are strict regulations around the production and distillation of tequila— just as ‘champagne’ only comes from that particular region of France, true ‘tequila’ can only be produced in Tequila, Jalisco and limited surrounding municipalities.

And unlike mezcal, a similar spirit which is made from a variety of agaves and typically burned to yield a distinctly smoky taste, true tequila is derived only from the blue agave and aged in barrels (in the case of reposado or añejo) to produce a rich, complex flavour.

It actually takes 7 years for a Blue Agave to reach maturation, at which point it is laboriously removed from the ground by a jimador— by hand, without machines, every single time. Hacking away at the large serrated leaves, the jimador adeptly exposes the heart of the agave, called a piña for its resemblance to a pineapple.

Some tequila makers take truck-fulls of agave piña and boil them whole before distilling the resultant mush, while others extract the juices prior to boiling— the result is an earthly, botanical tequila compared to a rich, caramel tequila, but still the barrels (ranging from Pinot noir barrels to whiskey barrels) have a great impact on flavour.

Perhaps we were most surprised to learn that most Mexicans sip tequila to enjoy its complex flavour— no lime and salt shots here!

We spent our first night in Tequila sipping a few tasters of the good stuff all over town, gradually developing a palate for what would become a staple drink on our journey through Mexico.

The real staple, though, would be cantaritos, a cocktail made from tequila; fresh squeezed orange, grapefruit, and lime juice; squirt; and a touch of salt. This was our first encounter with the delicious drink, which is sold all over town at all hours of the day, but certainly not our last!

The following day, we joined a tour at Casa Sauza, the second-oldest commercial tequila distillery in the world and one of the only brands still operating within town, which is how I came to learn much of the information above.

We planted our own agave in a field, sampled several of their (admittedly average) tequilas, and then managed to polish off an entire bottle with the only other two gringos in the entire town, all for the bargain of 230p ($11USD) per person.

And seriously, they remained the only gringos we saw in the next two weeks of travelling.

On Wednesday, we rolled out of quaint little Tequila, which we’d really come to adore for its unassuming beauty and friendly locals— but we didn’t go far.

Just as visiting a wine tasting room is different from actually experiencing the vineyard, we craved a visit to the agave fields themselves (and this craving was far from satisfied on the Casa Souza tour). My original motivation was photography, but in the last two days we’d also come to appreciate tequila in a whole new way, so the promise of a more “on-site” experience also intrigued us.

We wanted to see the piña being unloaded, walk through the distillery, and sample tequila right out of the barrel— which is precisely what we did in the nearby towns of Amatitán and El Arenal.

Again, I chose these spots for their rolling agave fields, envisioning a rural experience that involved pulling off dusty roads to wander between thousands of silver-blue agave. And that, too, is what we did.

One afternoon, stumbling randomly upon a small distillery (Rosa Lía) in Amatitan, we wandered into an open cellar and asked if we could taste some of the tequila. Fernando, whom we formed a fast friendship with, poured half-cups directly from the barrel, and as we sipped on pink tequila (aged in rose barrels) and sampled our new favourite style, añejo, we marvelled at the unexpectedly local experience.

After the 3 of us went to lunch, we toured Fernando around our van, accepted a few bottles of agave beer as a generous gift, and purchased 5L of reposado from the barrel for a startling 300p ($15USD). All in all, it was one of those experiences that left of remarking yet again just how special this country is and how generous the people are.

And if you can believe it, we had an equally special experience as the only visitors at Don Elias, another distillery just up the road.

We arrived around 5pm and were given a grand tour in Spanish by one of the owners, who waltzed us through piles of piña, peered into the ovens, scaled distillery equipment, and eventually showed us into the enormous cellar. It lasted over an hour, but we were as reluctant to leave here as we had been Rosa Lía— and that’s not just the tequila talking.

At the end of the week, we drove a little further east towards Guadalajara, the capital of Jalisco and Mexico’s second largest city, which we’d be skirting for another couple weeks before finally venturing in.

Instead, our destination was on the far west of the city— Bosque de La Primavera (Spring Forest), a beautiful protected area where we hoped to find camping.

The last few weeks in mainland Mexico have been a big change for us. We spent almost all of last year camped in amazing, remote, free spots all over the American West and, to our surprise, equally spectacular places in Baja. We became accustomed to eating meals outside, kayaking or hiking right out of our door, and showering outside without worrying about a single neighbour.

But since we arrived onto the mainland and have been exploring Riviera Nayarit & coastal Jalisco, we’ve struggled to find similar campsites. The beach is so developed here that there’s hardly a stretch of sand leftover for boondocking and the “beachfront” RV parks that do exist are a lot more expensive than we’re used to (500p or $25USD).

Instead, we’ve spent every single night on the mainland sleeping in our van on quiet residential streets, in parking lots, and access roads that lead down to the beach. These spots have all been free, very safe, and perfectly quiet, but a major departure from the secluded, wide-open camping that we enjoyed in Baja and the US.

All this to say— we really, REALLY wanted to find a spot in the forest and just take a break from sleeping on the streets.

Bosque was exactly what we needed, a safe and secure campsite for 100p ($5) where we couldn’t see or hear a single other human. We breathed in the forest air and, in the morning, checked out a nearby hot river that naturally babbles through the pines at 98F?? If anything was worth the wait, it was this!

Although we went to Mazamitla at the end of this week and stayed for nearly 10 days, in the interest of continuity, that’s all included in the next post!