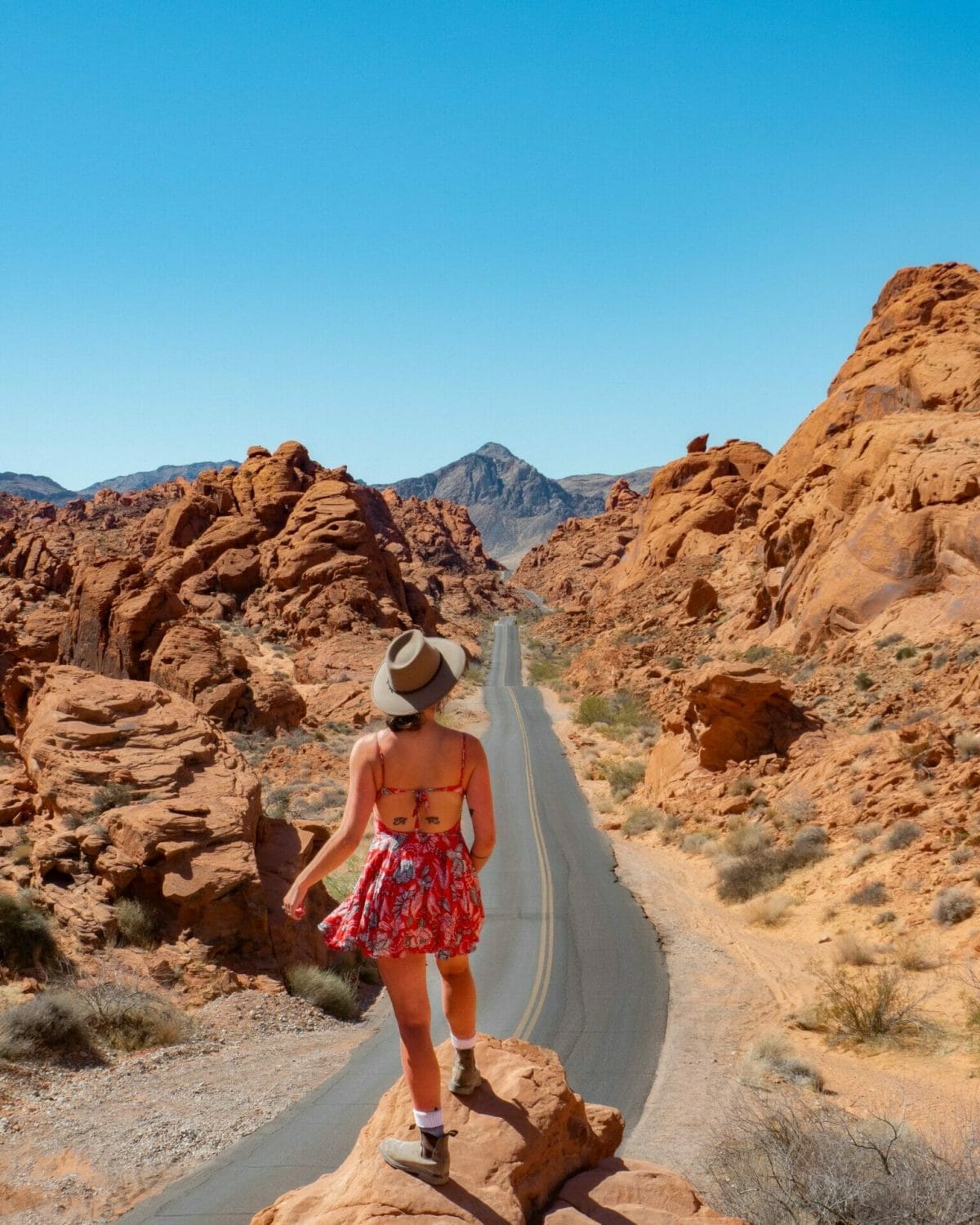 Finally leaving southern California behind and crossing the border into Nevada, we spent the week exploring a state that wasn’t even on our original itinerary. And despite circling Las Vegas for a majority of our time here, we spent zero time on The Strip and a surprising amount of time climbing or scrambling through vibrant red rock landscapes that I truly never imagined could exist so close to Sin City— the overwhelming sentiment was that southern Nevada is wildly underrated and a return trip is absolutely essential.

We started the week in Nevada at Red Rock Canyon National Conservation Area, a spot Dan had visited last year and that we were both eager to explore, especially with climbing gear and more time.

It far exceeded expectations— striking red rock formations rising above the dry Mojave Desert and contrasting dramatically with green hills in the distance. Even single hiking trails showcase a variety of geology, with dark slick rock alongside ledgy white sandstone, and I found myself snapping hundreds of photos of nothing but red rocks (which I suppose isn’t terribly unique in a place called Red Rocks, nor is it out of character for someone with a camera glued to her hand).

Owing both to its spectacular scenery and shocking proximity to Las Vegas (just 30min west of the city), the canyon was abustle with activity, but we still managed to find solitude on the park’s many trails.

Away from the tour buses and rented convertibles, this is a real local spot, the kind of place I could easily imagine as a weekly outing to escape the city— not to mention that it’s at least 10 degrees cooler than Vegas, which certainly didn’t go astray during this blistering heat.

Our first day, we drove the scenic 13-mile loop through the park, stopping off to hike/scramble our way to Calico Tank (2.2mi) and to admire various viewpoints before insane wind gusts (and subsequent sand flurries) drove us back into the van.

As much as I’ve harped on about how close this is to Vegas, it was still a real trip to see the city rising a stone’s throw away over the rocky landscape. It’s just genuinely hard to believe that something like this exists within the same county lines— if others knew about Red Rocks, they certainly didn’t let on during any of the times I’ve passed through. And I almost can’t blame the locals for wanting to keep it for themselves!

We celebrated a fun first day exploring Nevada with something I’d been dreaming of for the better part of 4 years: a cotton candy burrito filled with ice cream that a friend knowingly showed me on Instagram while I was still at uni in Australia and a world away from visiting Vegas.

Like Red Rocks, it did not disappoint, and I devoured the entire thing in a matter of minutes.

Back inside the conservation area the following day, we ticked off another few excellent hikes out to Calico Hills (2mi), Keystone Thrust (2.4mi), and Ice Box Canyon (2.2mi), the former providing fantastic access to classic Red Rocks climbing.

While lamenting the fact that we hadn’t brought any sport climbing gear to take advantage of the hundreds of easy routes we could have put up with at least some protection, we spotted bolts glinting in the sun on a large and unoccupied crag right near the start of Calico Hills.

We raced back to the van, donned harnesses, and hauled our rope out to the rock for an afternoon of climbing— although the accessible routes proved a bit too easy for our liking, they offered an awesome opportunity to continue breaking in my shoes and practice a few new skills, including an exhilarating free solo climb to the top.

After running some errands and getting an oil change for the van in Vegas, we spent the second half of the week exploring Valley of Fire and relaxing on the sunny shores of Lake Mead.

Amazingly, Valley of Fire was even more scenic than Red Rocks, if less of a hiker’s and climber’s paradise. On a series of short jaunts from the van, we explored all of the state park’s viewpoints and 1-1.5mi hikes, the most spectacular of which was the Fire Wave.

Dan swears the real Wave in Arizona is still more impressive, but I’ll admit that I have trouble believing it— how can you beat these colours?!

We were equally impressed by all the lizards and wildlife wandering through the park, a family of rams casually holding up traffic on Mouse Tank Road while they scurried from shoulder to shoulder in search of the tastiest bush.

It’s the kind of animal that looks made-up, a perfectly camouflaged and miniaturised Pokémon with his spiked head and flat body— as beautiful as he was sociable! I half considered adopting a van lizard, but eventually let our little friend back onto the rocks to forage for bugs and return to his little lizard family.

Both Red Rocks and Valley of Fire are truly otherworldly, home to landscapes that wouldn’t seem out of place on Mars. Between all the climbing, scrambling, hiking, and general excitement, we were well ready for a relax on the lake by the time the weekend rolled around.

Submerged in cool blue water and surrounded by desert mountains at Lake Mead, I couldn’t imagine a better end to a surprisingly incredible week in Nevada.

This week featured some of our favourite campsites yet, particularly those situated right on the water at Lake Mead— and with free spots like this, it’s hard to imagine ever paying to camp!

Despite a rather large grocery restock on our way through Las Vegas and a fair bit of driving around, we were incredibly pleased to make it through the week with a modest $384 of spending, one of our lowest weeks yet!

15 best hikes in the Sawtooth National Forest (+ an extensive guide to Stanley, Idaho)